When a wikilink is present in a line item of a bullet list, the corresponding entry in the backlinks pane is just that line item, If “show more context” is active, the children are shown.

It would be nice to provide more/better context for that line item.
In particular, outliner-based products show the parent item too.

If a reference that appears in thebacklinks panel is under a heading, show that heading instead of or in addition to the title.

Treating the heading block as its own fundemental info unit throughout obsidian allows you to naturally create different hierarchies and dimensionality to the data.

Hmm. I would say either show the title AND the heading or have an option to toggle this on and off, because the way my notes are structured means I really want to know the context of that heading–when I’m taking notes on an academic article, there are a whole lot of “Introduction” or “Conclusion” or “Chapter 1” headings that won’t tell me about the context at all!

Yeah the title could be smaller font, bold, closer linespacing to the sentence that contains the link.

Similarly OP is mentioning the value of seeing a bit of context (heading), so you could see note title, heading & the line link is in for each backlink. Just need slightly different styling to indicate what’s being shown.This could be too much, so a toggle to “expand context” would be nice.

I also feel there should be an option for the backlink list to appear at the bottom of the note/page, so it’s more legible and your backlinks can flow along with the rest of your notes contents.

In backlinks section, when “Collapse results” is OFF, then show also the innermost block (or heading) under which the mention is contained.

Hierarchical context is often more relevant then the context immediately surrounding the mention, e.g. for list items in nested lists.

This would dramatically increase the utility of backlinks. Would love to see it.

I noticed that toggling “show more context” allows me to see nested items but not items at a higher level of hierarchy. This results in missing context. This could be solved with the above solution (although it would require users to add headings where they might not otherwise have done so).

An example, coming from Roam:

Is there a way of automatically exposing “[[Hawaii trip]]” in the backlink without having to manually tap on the little “show more context” up arrow?

Thanks I just had the same problem.

Is there any news on this issue? For me, the backlinks often are useless right now. I also have to Roam/Logseq concept in mind. Or do I miss something?

This is a feature in logseq and it makes such a difference. It’s understandable because logseq works with hierarchies of blocks, but a breadcrumb of headings could fulfill a similar role in obsidian.

Yes, looking forward to seeing something like this in Obsidian

First, I love Obsidian, and I respect the Developers putting in thousands of hours to run the software

I’m a daily notes user, and I try to use it as much as possible, but the way Obsidian returns the backlink results when “Topics and Subtopics” are used represents a problem.

In this example, I’m trying to see all the movies performed by Matt Damon, but the result is useless. It is possible to see the actor and the date but not the movie’s name which requires to open each file to see the name of the movie 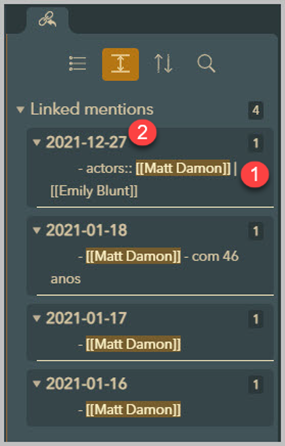 Roam Research, which I know works in a different way (not plain text/markdown files?), can bring the three needed information:

Which is interesting, making a test with Logseq, accessing the same Obsidian database, it can bring the three information 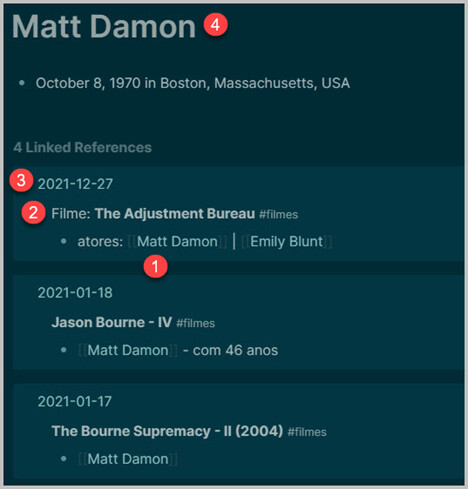 I’m aware of the “dataview” plugin but it requires building the information in a fixed structure to work properly using YAML or using “::”

In this example using Will Smith, the first move is inside a daily note, but the second had a dedicated page, and Roam could bring both. 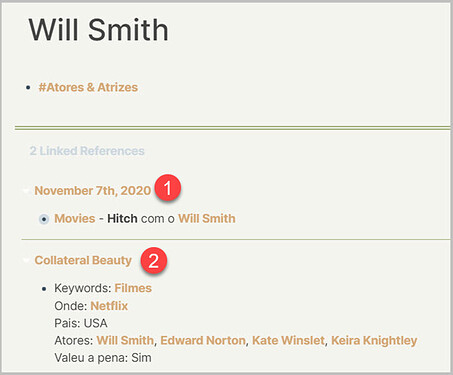 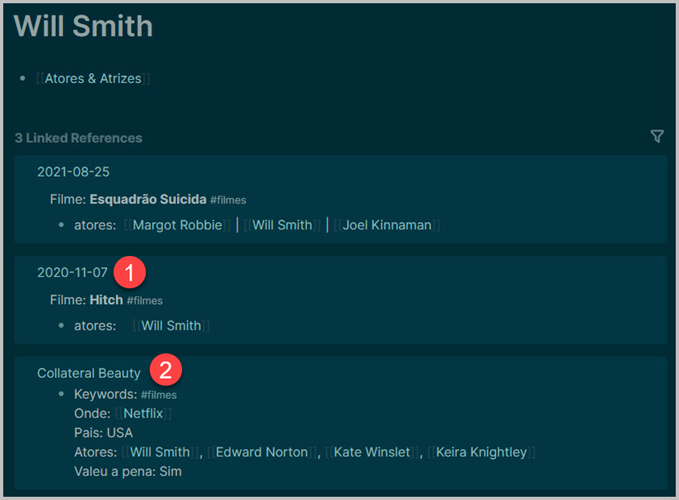 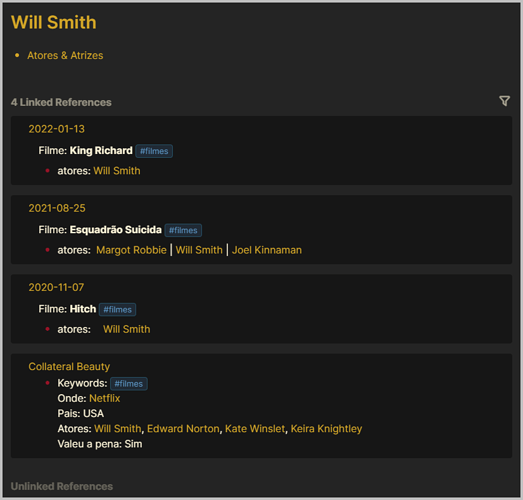 I think Obsidian is very close to be able to return the block name as LogSeq.
Here an example of block reference. Obsidian now brings the block perfectly, with the block name and all the sub-bullets. I think the reverse, when we tag or add a wikilink in a sub-bullet is something similar. Nowadays I have been using LogSeq as an workaround but I cross my fingers, everyday, for Obsidian. I think this is the only limitation Obsidian has comparing to “competitors” 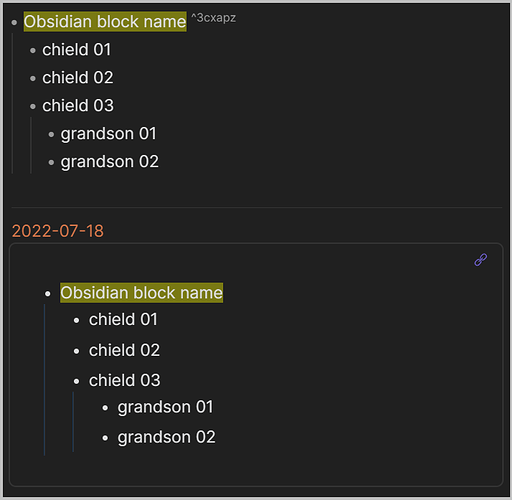 I think this subject is very sensitive among Obsidian users or, better, Obsidian culture. I’ve seen other topics like this and, like mine, no single comment.
I’ve heard that Roam Research, which has an imposing treatment of each bullet, was built based on another kind of system, and Obsidian was born based on markdown files, focusing on the file, not bullets. This explanation was faithful up to LogSeq. In my case, LogSeq is accessing the very same database as Obsidian, but Logseq can deal with “parent bullet” and “Children bullet.” efficiently.
Maybe someone is questioning: why does this guy just move to Logseq? (Obsidian Culture). Because I love Obsidian, and every day, I cross my fingers and check for updates, which would solve this limitation.

Just a friendly show of support from a fellow anti-dogmatist…

You’ve stepped on what seems to be the crux of the disconnect (puns) between Obsidian and other PKM’s like Logseq.

It seems to be the level of resolution or granularity in the definition of information nodes.

That is, Obsidian resolves to the “.md” files as its linkable nodes.

(truly do luv this community tho)

Any news in this area Dear Obsidies? Still pining away for some flavor of functional disambiguation… It must’ve felt similar to the early adopters of the motorized carriages back before cars replaced horse and buggy as the more robust or advanced means of transportation… Bah Humbug… These hippies and their fancy ‘link types’… Silly fad I tell ya! Why, back in my day… We had to manually connect each little data giblet… By hand [right-click]! Uphill both ways [bidrectionally], in the snow,…

First, I love Obsidian. I have been using it for quite a while, and it is the first program I open in the morning and the last I close at the end of the day.

I migrated from Roam Research, and I always heard that Obsidian does not return the backlinks as Roam due to its nature. Roam’s structure is a “blocks” concept, while Obsidian’s structure is a “page markdown.”

To illustrate, an elementary example → It is possible to see the child block with the link, the name of the file (date) but the parent block is missing. In this silly example, to see the name of the movie, I would need to open link by link. 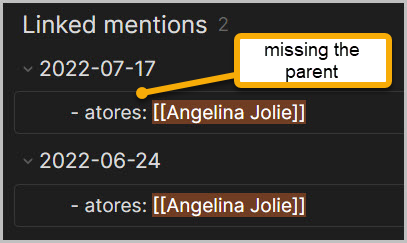 Then Logseq appears. Logseq accesses the same database as Obsidian and can return the information from the backlinks exactly as Roam Research. I have been using both for this reason.

And yesterday, by chance, I found an Obsidian plugin called Influx that makes possible to get the whole information when a child block has the link.
In this image we have the child (actors), the parent (movie name) and the filename (date)

I use Daily Notes as a backbone of my structure in Obsidian, and this limitation strikes me daily: meetings, projects, ideas, etc.

I wonder why Obsidian does not implement this capability and remove this untrue comparison against Roam Research, Logseq, and other tools.

Hi @mrkuramoto, I’m realising more and more the benefit of logging in the daily note, linking to a page, and then seeing those logs in the backlinks in document.

Because Obsidian is so customisable without a defined workflow, I wouldn’t have realised this until I looked at how Logseq encourages user’s workflow. However I have not used roam or logseq more than superficially.

These days I put information in its own page if it is a core feature of the note subject.

But for journal logging, such as had an interesting conversion with [[Person]] or worked on [[Active Project]] and had this creative idea, I write in the daily note, and use the [[link]]'s inline backlinks core plugin to see how related ideas are taking shape and growing over time .

And in fact, this is much closer to how one would work and write in a paper journal. But with backlinks, organising ideas can be really powerful.

In summary, I would encourage development of the aesthetics of the backlinks in document core plugin.

Indeed. Daily notes and backlinks are compelling, and the more I use Obsidian, the better it becomes.

The only “but” using Obsidian is how it returns the information from the backlink. I always heard it is due to a natural limitation: Obsidian focuses on a page, and Roam Research on a block.

I couldn’t believe it when I, by chance, found Influx, a game-change plug-in for Obsidian.

The picture below shows how Obsidian returns information from a Daily Note backlink.

and this is the Power of Influx plug-in:

The way Obsidian returns the backlinks information is almost useless for my usage, but Influx has changed everything.

This limitation of Obsidian, for sure, demotivates users to migrate from Roam, Logseq, and other programs to Obsidian because those programs work based on Daily Notes with blocks, bullets, and sub-bullets.
*I don’t know why but I can state that Obsidian wants to have this limitation

Anything that has achieved great expression has the potential to become something that requires a choice between two paths, becoming something almost religious.
Roam Research has the power to do something better. Still, suddenly, Obsidian, who could have the same capability, decides not to (here, first, I mentioned Logseq and then the Influx plugin).
Most of the people who contribute to this group are already “set” to "what the Obsidian community accepts and end up not adding anything relevant.

It is a shame that Obsidian, who can work very close to Roam, decided not to, and, oddly enough, all the followers just support the decision.

Shame on you supporters…

there is an elephant in the room but all the followers, like in a religion, just decide not to see it.

let’s go simple. let’s respect the work of others. And just implement what is best for the users.

at first I heard that it was a limitation of the text-oriented model and that Roam’s structure was born different. And then Logseq appeared, which accessing the same Obsidian database managed to bring the results like Roam. And then came the “influx” plug in which clearly demonstrated that Obsidian had the ability to return the same information as Roam Research.

But here comes fanaticism, blindness, something that religion defines as basic, and then everyone, from developers to supporters, is ok with that.

Here is the start of the END… if Obsidian doesn’t change it mind, it will die.

this STUBBORNNESS I just can’t understand.