I’ve been using Obsidian & Obsidian Sync for a few weeks now (moving here from iOS Notes and Evernote). I have spent some time noting down my feedback over the last few weeks, and will now try my best to separate my feature requests into separate posts so to make it easier for others to contribute opinions to the discussion, and for the dev team to be able to digest each request more easily.

I’ll start with the Graph View since it is by far my favorite feature and the reason I moved to Obsidian:

It is AMAZINGGGGGGGGGGGGGGGGGGGGG! I am getting jittery with excitement just thinking about it! I was browsing my notes and using the graph view to check out connections as to how a story would lead into another and I could not believe my eyes, it was working so well showing relationships between notes I would have never seen before and in such a natural organic way! I just want to scream out to the world AHHHHH LOOK AT OBSIDIAN IT IS SO AMAZING!!!

These are predominantly for the desktop/PC version, but may automatically affect the mobile app as well:

Shoot, I forgot to add one more:

Moving mouse over / clicking on a node or note in the Graph View should have the option of forcing to reveal the titles of the connected nodes/notes.

For example, I’m looking for comedy idea inspiration, I move my mouse over the node/tag “#socialinteractions” looking for standup comedy notes that have to do with social interactions.

But I have no way of visualizing what the notes are, because even though they are highlighted, I have to zoom in further to see the note title. But if I zoom in, my mouse cursor will inevitably get forced to stop hovering over the “#socialinteractions” node, and I will no longer know which notes were highlighted. 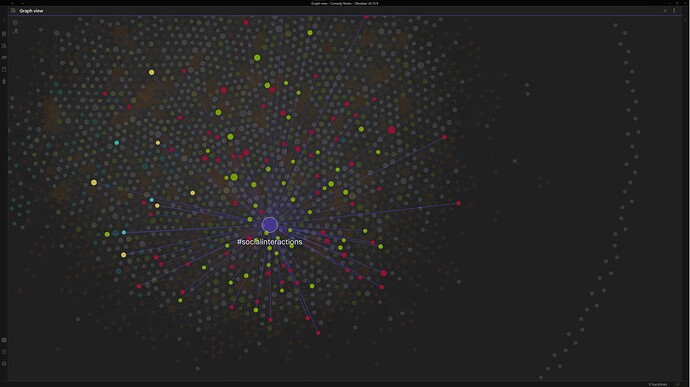