Are you using iOS or Android? [X] iOS [X] Android Is this a bug report or a feature request? [X] Bug report [ ] Feature request Got the Obsidian mobile app on both iPadOS and Android, and noticed that neither had finished syncing everything after a day. I have about 3,000+ notes, but even then, I thought that was slow. Had a look at the logs and realised that Obsidian Sync was running across some files that had symbols (: ! ? for example) and would get stuck trying (and failing) to download…

If detailed steps to reproduce would be helpful, please just let me know.

For what it’s worth: I think it would be very good to make Obsidian accept any special character in note titles. I can’t be the only person who very often wants to use characters like :, and ? in my note title. I imagine some people would like to use emojis (shudder). If enabling this means storing note titles in a YAML block in addition to the filename, well, that seems worth it to me.

The notes that fail to sync include all the notes with invalid filenames, plus some others.

Which others? I don’t see any other in your screenshot.

The notes that fail to sync fail silently, they are not mentioned in the log.

What is a file that is valid but not synced?

Here’s what I see in the “Sync log” on my MacBook: 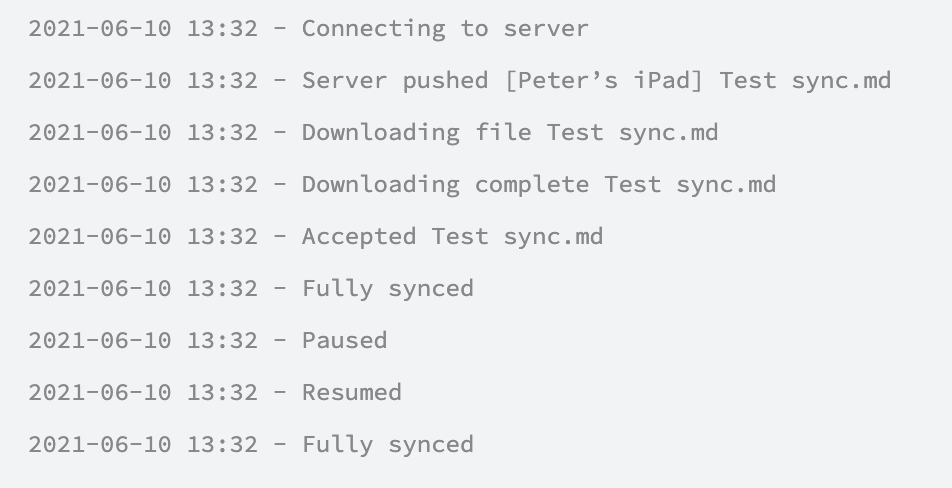 Here’s what I see in the sync log on my Google Pixel 3a (Android):

With the Android sync log, one thing I noticed is that initially, it just showed the attempt and then FILE_NOTCREATED error for the “Where are we?” file. Then it is slowly adding more files to the list (maybe one every 30 seconds).

Bear in mind my internet connection is good (strong Wifi).

I don’t have time to keep watching the log now, but over the past days I’ve noticed that I never see the “Fully synced” message in my Android log, just a list like the one in my second screenshot.

I still don’t understand if there are actual valid filenames that are not synced or is this just a problem of not showing “Fully Synced”?
How big is your vault? Can you let it run and see where this goes?

My vault is small, less than 300 short notes.

The “Test sync” file did not show up for at least an hour.

Checking now, some 12 hours later, it is now available on my phone.

So it seems like the issue here is better described as “sync delay”, which may or may not be related to the invalid filenames in some notes.

I have noticed something similar with my daily notes: they’re usually not available on my phone the day I create them, but they do eventually show up.