[BUG] Files containing double quotes (“) or question mark (?) do not sync to Android

Files syncs to mobile and is accessible within the app 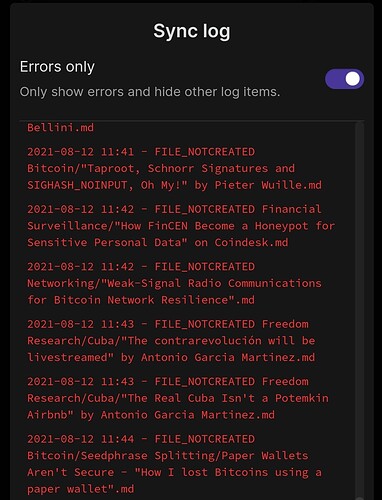 There were a few threads that reported this bug, but they were marked as fixed. The only remaining discussions are specific to creating notes on mobile, not creating the note on desktop then attempting to sync it to mobile.

Platform [ ] iOS [x] Android Obsidian Mobile version: v0.1.1 I’m still seeing the issue reported here: If there are invalid filenames in some of my notes, only a subset of my notes are synced to mobile. The notes that fail to sync include all the notes with invalid filenames, plus some others. If detailed steps to reproduce would be helpful, please just let me know. For what it’s worth: I think it would be very good to make Obsidian accept any special character in note titles. I can’t be…

It seems as though the “=>” character in a note title broke Obsidian Sync for Android. The sync log showed a FILE_NOTCREATED error and then no further output, despite there being many more notes still to sync. I’m seeing that there are a bunch of characters that I can put in note titles on Obsidian for Mac without getting a warning, but which trigger a FILE_NOTCREATED error on Android. Another example is double quotation mark (").

That’s not a bug. Android does not support file with names that contain ? or ". We can’t sync those files. If you use mixed OSes, it is up to you to name your notes properly so they are compatible. 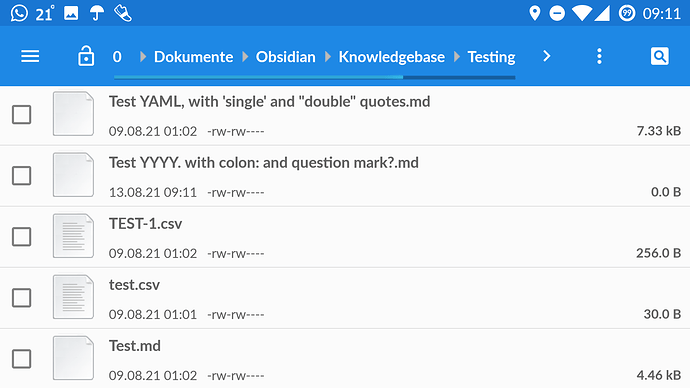 The only thing people often forget: Like with Linux, it depends on the filesystem used! On Android, the internal storage usually uses ext4 (on which all the above works without any problems). Users often format their SD cards (external storage) using the FAT32 filesystem, which doesn’t allow characters like above.

So if you format your SD card using ext4, you’ll have no problems. Except that you can’t (easily) access them in a card reader on Windows.

Alternatively, if your synced vault isn’t too large, you can store it on the internal storage.

Don’t know if Obsidian Sync supports this correctly, but it should. (Syncthing does.)

Otherwise @WhiteNoise is correct, of course: Know your OS and your filesystem types, and avoid things that might be incompatible when mixing.

No, this is not an issue of internal or external. Android has restriction on top of the filesystem used and we have (and the api we use) to honor them. Syncthing uses a lower level api and it doesn’t respect the Android spec. This is their decision.

Gotcha, I didn’t know Android had these restrictions. Might be helpful to let users of Sync know when they are creating a note containing characters that won’t work on all OSes. I’ll remove the invalid characters from my note names.

Simplest solution is the previous restriction on using invalid characters in names.
Since many disliked that, a toggle choice might be best.

I habitually avoid characters invalid in any OS or file system I might conceivably use, but I suspect for those not used to doing that it would be simplest to remove the option.