Multiple vaults on iPhone (via Dropbox)

Hello,
I am using Sync on Mac and iPhone via Dropbox. All the data syncs, but it behaves and looks different on Mac vs iPhone. On my Mac, I set up two separate vaults within my remote vault, using “open folder as vault”. They open in two separate windows as vaults, which is what I want.

However on iPhone, those same two vaults appear as two folders within the single remote vault. This makes it hard to use in the same way. I don’t want any interaction/overlap between the two vaults.

This is how it looks on my Mac - this is the functionality I want: 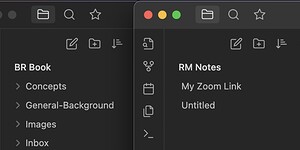 This is how it looks on my iPhone - the functionality I don’t want:

From what I could find in pre-existing discussions here, what I am hoping for may not be possible. But I didn’t quite understand and wanted to be sure in case I am missing a way to do it.

Have you just opened the vault one folder too high on your iPhone?

That is try opening the BR Book folder, when opening the vault, and not the synced folder (which also has the RM Notes folder).

Thank you - that option sounds great, but I don’t know how to do it. Looking at the options for opening a vault from within the iPhone app, I only see an option to open the overall vault. There’s no “open vault from folder” option as there is in the Mac app.

If there is a way to open the BR Book and RM Notes folders as vaults on the iPhone, I would love to know how. 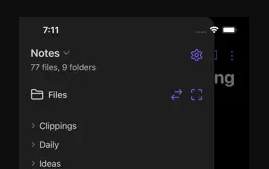 What happens if you press the “Notes” equivalent in your app? Doesn’t it show a screen with “Obsidian” and the options to setup sync, and create and open vaults? It does so on my Android version, but I reckon that it would look the same on iOs, but I might be mistaken.

Thank you. That’s what I’m pressing, but it leads only to an option to open the main root vault. Reading some other posts, I wonder if this is a limitation of iOS that doesn’t apply on Android, maybe to do with sandboxing.

Obsidian on IOS Cannot open vault from folder I am trying to use Obsidian on my iPhone and would like to use pre-existing markup files to start a vault. However, I only see options for “How to setup sync” and “Create new vault” when I enter the app, with no option to open a vault from a local folder. Is this a limitation of the IOS app or am I doing something wrong? In addition can I open a folder from Google Drive, or only locally from my phone (once the first part is resolved) ? Thanks in …

Use case or problem I recently downloaded this application on the iPad and am wondering if there is a way to open an Obsidian vault created on my MacBook. The vault is stored in a separate folder on iCloud Drive for organisational purposes, and Obsidian on iPadOS does not seem to offer the ability to open vaults other than the ones created in the folder that Obsidian creates when you enable Store in iCloud. Is there a way to selectively open vaults nestled in an organised file structure similar…

(the option described by kunid didn’t work for me)

Are your 2 vaults inside another vault?

How are you using Dropbox to sync Obsidian on iPhone? Are you using the Remotely Save plugin?

i have version 1.4.0 on my iphone right now and it only offers “create new vault” or or “setup obsidian sync” on the options. How do i do the icloud option?

sorry i see iit now in the “create new vault” option. I would prefer the dropbox option but i understand why it’s not possible.

I’m using the official Obsidian Sync option - but I have the vault root folder stored in the Dropbox folder on my Mac, just as a way to back it up.

Do you recommend the Remotely Save option? And would that still let me back up to Dropbox?

I don’t think I do understand why…

Does the iCloud version let you use two completely different vaults and sync them both on Mac and iPhone? That would be worth considering.

My overall question is:

It seems that Obsidian Sync (the official one) limits a user to one single synced vault. Then you can have other vaults within that vault, but there is still only one overall synced vault.

Then the difference between the two apps, Mac and iOS, is that on Mac you can get independently functioning vaults by creating folders within the root synced vault, then using those folders as vaults with the “open folder as vault” option. But on the iOS app, that option doesn’t exist.

So the end result (if I’m understanding right) is that, when you are syncing, on Mac you can use two separate vaults but on mobile you can only have one vault — again, this is true only if using Obsidian Sync.

I very well may be confused! I welcome correction/advice.

It seems that Obsidian Sync (the official one) limits a user to one single synced vault. Then you can have other vaults within that vault, but there is still only one overall synced vault.

Then the difference between the two apps, Mac and iOS, is that on Mac you can get independently functioning vaults by creating folders within the root synced vault, then using those folders as vaults with the “open folder as vault” option. But on the iOS app, that option doesn’t exist.

So the end result (if I’m understanding right) is that, when you are syncing, on Mac you can use two separate vaults but on mobile you can only have one vault — again, this is true only if using Obsidian Sync.

First off, is your goal to use nested vaults (vaults inside vaults)? If not, don’t do it. The developers recommend against it because it can cause problems, even without syncing. (I think you’re correct that nested vaults don’t work on mobile.)

Obsidian Sync supports up to 5 remote vaults, each of which can be connected to local vaults on multiple devices. I’m still not sure how you got the result you did; it might help to describe your setup in more detail.

I don’t have any experience with Remotely Save, I was just trying to understand your setup (it sounded like you were using Dropbox on iOS).

Thanks so much. Yes, you are right that “using sync via Dropbox” is not accurate - I am using the regular sync, but the vault happens to be stored in the Dropbox folder in my Finder.

Also yes, I don’t want to use nested vaults - I’d like to use multiple independent vaults. It’s great that Obsidian Sync supports up to 5 - that’s perfect.

The problem seems to happen when I am in Remote Vault > Manage. I can set up more than one remote vault, but when I connect to one of them, the “connect” option disappears for the others. I can connect one or the other, but not both.

This is what it looks like on both Mac and iOS. The one called “Vaults” is the one I’ve been using successfully. 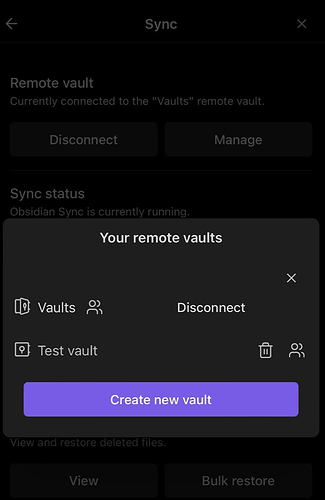 Each local vault can only connect to 1 remote vault.

That did the trick! I don’t know how I missed it. I would love it if the official Obsidian help page had step-by-step instructions for this, for dummies. Once you explained it, it made sense.

Thanks so much. I have to say, Obsidian is one of the best experiences I’ve ever had with software - so smooth and natural to use.

I’m glad you got it working! Obsidian’s documentation has some unfortunate rough edges.

I appreciate you filling in the gap!