I observe a constantly high CPU load with my local vaults on macOS Monterey, except for the sandbox vault.

Nothing of these steps changed anything.

CPU load for the main process remains constantly high, between 60% and 95% (mostly around 80%).

The Performance tab of the Web Dev Tools shows near-zero CPU for most of the time, while the Activity Monitor continuously shows a high load. 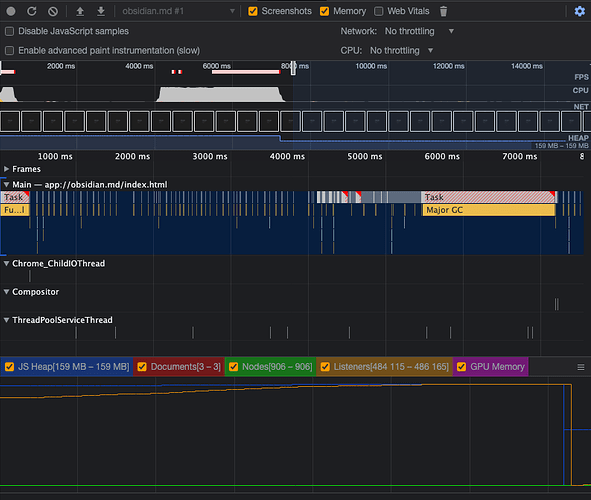 When I created a fresh vault from an existing folder (a quite small one, 470 files, mostly non-Markdown files), CPU load is as low as when using the Sandbox vault.

Which makes me wonder if all of my local vaults have some issue with their config or caches?

How can I troubleshoot this further?

Nothing in particular. I only want to use my vaults without maxing out the fans.

Update: Seems to have been some background indexing going on.

I opened all vaults and let Obsidian run for a few hours, and now all Obsidian processes are near 0% CPU/GPU time. 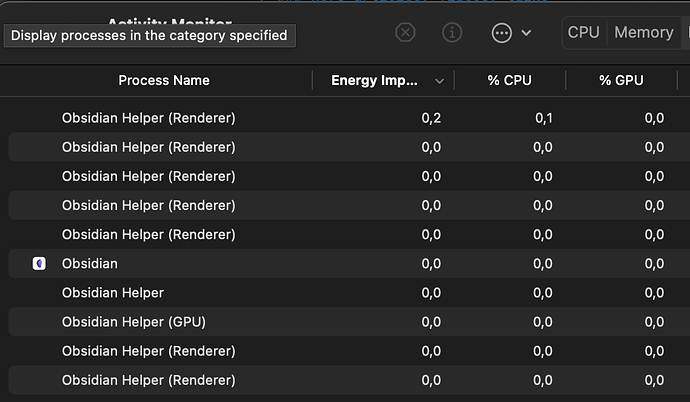 I will observe this further, but for now, things look quite good.

It would be good to have some more tooling available to better identify which long-running thread keeps the CPU busy for hours.

Does Obsidian run regular indexing or caching tasks in the background that take hours to complete?

I’m not seeing this on my Mac. I would expect the things you tried would clear up or reveal the source of the problem. Just to add to the list of basics: did you try rebooting the computer?

Are you using any kind of sync (Obsidian Sync, iCloud, Dropbox, etc.)?

Thanks for the suggestion. Although rebooting is mainly a problem solver for Windows rather than Mac/Unix, I tried this today, but Obsidian went to ~80% CPU load again.

I let btop track the per-app CPU usage. For two hours, usage was between 50-90%.

After that, the CPU usage turned into an on-off pattern (a few seconds of activity followed by a few seconds of idling). After 4 hours of uptime, the pattern still persists.

I still suspect that some internal indexing is going on here, but I have no idea how to track that down further, besides staring at CPU graphs.

Thanks, @CawlinTeffid, for the help.

Testing config files one by one might make sense but on the other hand, I observe the problem with several of my vaults. They are completely separate. They don’t share files and are not nested inside each other.

Just now, I opened some random folder as a new vault. So this is a brand-new vault with standard settings. No community plugins enabled (safe mode=on), not too many files inside (1,361 to be precise, with only 2 Markdown files).

After opening the vault, CPU usage of Obsidian.app stays around 80% for a couple of minutes, then drops to near-zero.

(Note the elapsed time, and the disk I/O.)

This pattern repeats every time I close and re-open the vault.

I am more and more convinced that Obsidian does some initial indexing whenever a vault is opened. The larger the vault, the longer it takes. (One of my vaults has 60,000 files inside, of which 2003 are Markdown files.)

Edited to add: I do not refer to the one-time initial indexing that Obsidian does with brand-new vaults. It must be something else that happens at every start of a vault.

I am more and more convinced that Obsidian does some initial indexing whenever a vault is opened. The larger the vault, the longer it takes. (One of my vaults has 60,000 files inside, of which 2003 are Markdown files.)

Yeah, I’d expect it updates the index whenever you open a vault (because you could have changed the files while it was closed). I normally leave mine open all the time. I closed and reopened it and saw CPU go pretty high, settle at around 40%, then go back down, all taking about half a minute (this is on an M1 MacBook Air).

When I created a fresh vault from an existing folder (a quite small one, 470 files, mostly non-Markdown files), CPU load is as low as when using the Sandbox vault.

Maybe there is something here to explore?

(Note the elapsed time, and the disk I/O.)

That does look excessive (to not-an-Obsidian-developer me). And the I/O on the earlier pics you posted goes up to almost 1 GB.

Maybe I should upgrade…

Oh yeah, I forgot to mention that my vault has 6,000 files (mostly Markdown).

I would hope that your computer should be able to handle Obsidian without much trouble (I was thinking you might have an old Air; anyway I realized that I won’t have much insight into normal performance problems).

I’ll try putting my vault on my old Linux machine to see what happens, but I don’t know when I’ll get around to it.