Enhancements to Node, Link and Text on Graph View

Graph view would benefit as a research / analytics tool with a few “simple” enhancements:

Check examples of node / link metrics: https://reference.wolframcloud.com/language/guide/GraphMeasures.html
I’m sure the development team is well aware of the possibilities here given the amazing work they delivered already.

Use cases:
On large and complex vaults this allows us to identify key notes, relevant paths and links. This information highlights what is important that we might be overlooking, what can be ignored (filtered) because it’s noise, what needs further research because it’s not strong enough (doesn’t have enough evidence references or citations, for example).

A couple of examples of what is possible on graph analysis: 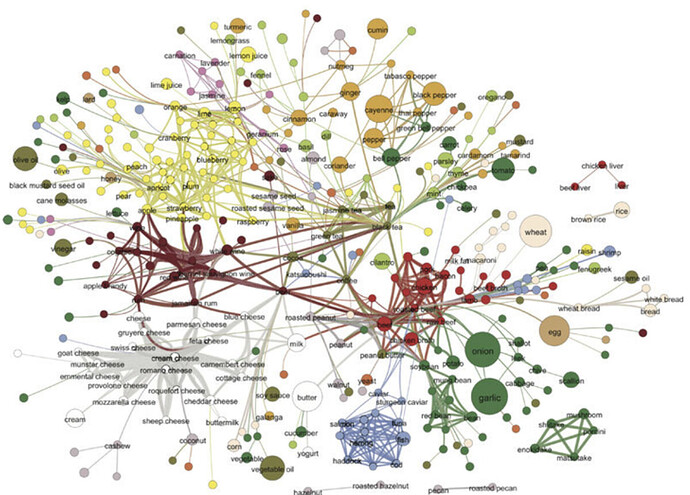 Maybe this is a good plugin idea?

This is great. I think that integrating this into the core of interlinked software like Obsidian will really help show some of their potential for helping us think, and will make adopting new users easier.

I really think Obisidian could benefit for the graph from the amazing Org-roam project, which is open-source roam alternative for emacs.

Here’s a short video I recorded

here’s a better .gif with more of it’s excellent features. (from the original repo)

Most important features to use as inspiration:

Could you add a link to the existing feature request you mentioned? It would be a good addition to your post (and I’d like to have a read too!)

While the colour graphic you included is absolute eye candy for myself personally, I wonder how you envision Obsidian morphing from what it provides now, to how it could provide something closer to that graphic or indeed what you are envisioning?

I can imagine something like the ability to highlight graph nodes / links based on search terms (which I think is something that has been discussed in another thread, I’ll return with a link if I can find it) but the example colour graphic makes me think of a graph that asks for inputs that don’t exist yet. Perhaps a set of predefined keywords in a config file that should contribute to highlights, with each keyword being a different colour. Or perhaps those keywords should be automatically (AI-tomagically) defined. Or something else?

@santi I have seen the sidebar of Roam cited as one of its favoured features more than once, to say the least. What aspect of it is your favourite? (or aspects!)

I haven’t used Roam myself, but I have seen some videos of folks describing their usage of Roam. Sometimes those descriptions include more sidebar invocations than others, and I’ve started to build up an idea (again, without any hands-on experience myself) of how it could be useful, but I haven’t directly asked someone more familiar than myself what they use it for most, or what they favour it for most? Are you someone who could answer, or have I hinged on your org-roam mention a little too much?

Graph analytics is a well established discipline in Academia and software industry. Relevant vendors include companies like neo4J and Tigergraph or open source solutions such as Cytoscape or Gephi.

I don’t expect Obsidian to be a graph analytics tool or a Knowledge Graph solution but it can borrow a lot of ideas from those two spaces. Here are some examples of how to use metrics to color a graph:

Definition: Betweenness centrality measures the number of times a node lies on the shortest path between other nodes.

What it tells us: This measure shows which nodes are ‘bridges’ between nodes in a network. It does this by identifying all the shortest paths and then counting how many times each node falls on one.

When to use it: For finding the notes who influence the flow around the knowledge base.

Definition: EigenCentrality measures a node’s influence based on the number of links it has to other nodes in the network, how many links their connections have, and so on through the network.

What it tells us: By calculating the extended connections of a node, EigenCentrality can identify nodes with influence over the whole network, not just those directly connected to it.

These examples were adapted from: Cambridge Intelligence

Other metrics could be:

The nodes could also be coloured according to categories:

We would need a proper interface and metadata to handle these classifications.

Glad to work with anyone willing to develop a Plugin / CSS if that’s the fastest solution to have this available. I can’t code but can help test and tweak someone else’s code if needed.

And search before adding new threads! I’m closing this one—feel free to copy-paste your contributions to the appropriate previously-existing feature requests linked below.

In graph view, if you have clusters of notes that don’t share any connection, it would be great if they could be colored differently. Not sure if it’s possible to do this in the CSS directly?

Allow to Configure How Node-Size is Calculated Feature requests

Dear Obsidian team, First off, thank you for making a software that I love to use every day. Coming from this love, I would like to make a request: Can we please have the ability to configure what variables are used to calculate and render the size of nodes in the graph-view? I believe the graph-view is one of the most important features of Obsidian. It has the potential to completely change how we discover, reason about and share new ideas. After figuring out how it currently works, adjust…

Sometimes when it is very important to me to distinguish between the nodes that only have one connection and the nodes that have like 5-10, these two nodes almost look identical in size. It may be helpful to have a slider or shortcut to increase and decrease the node size scale multiplier. This may allow you to quickly find what you were looking for, then simply return the multiplier to a more reasonable value. Thanks.