Hello all! I’m very new to this app and way of note taking.

One of the ideas I have is to create a vault for my TTRPG (Table Top Role Playing Game). I run (Dungeon/Game Master) a couple different kinds of games.
Dungeons and Dragons (D&D) or Call of Cthulhu (COC) are the most popular so I’ll stick with them for this request. It could be for any RPG system. I’m more interested in structure.

I’m interested in seeing how others take notes for their sessions and world building. Does anyone share their vaults or have links to a few they know? I’d love to see other methods of organization to get me started.

I also saw a plugin for a Dice Roller and a Leaflet plugin for Maps. I wonder what kind of plugins could be created to augment and support running a game all inside of Obsidian.

Please post your public vaults, methods and plugins you use to help you run your sessions or create your worlds.

There are a few posted here in the forums.

One very slick example using the data view plugin is in this thread: Dataview plugin snippet showcase - #30 by ebullient

I also make excessive use of the Timeline plugin!

Full insanity is in the main branch: GitHub - ebullient/campaign-notes at main

Others have slick setups, too…

Love the timeline idea for the campaign! Are you talking about this plugin?

That is the one. @darakah was kind enough to accept my contributions so my crazy usecase works.

It is easiest (at the moment) for me to have one big file listing what the heck the NPCs are up to while the player’s aren’t looking:

I also have separate player-centric files. My players started at age 10. While they are all turning 12 now, I’ve done a lot of player-focused note taking for them, and that is kept separate (just in case… I end up having to cut and paste it a zillion times in places because… kids).

The Timelines plugin aggregates all of that stuff, and gives me one nice timeline view showing all of these dates together. It can do live generation, and it can also render statically. Since I do push the repo to git, both forms are useful.

The player’s view is pre-rendered, campaign-notes/timeline.md at main · ebullient/campaign-notes · GitHub. It reads fine in markdown, it just doesn’t look as nice.

The “multiple parties and what are they doing” timeline is rendered on the fly, and looks like this (this is but a snip, but the bright green is the party’s POV, the red are adversaries, and the blue are friendly/ambivalent NPCs): 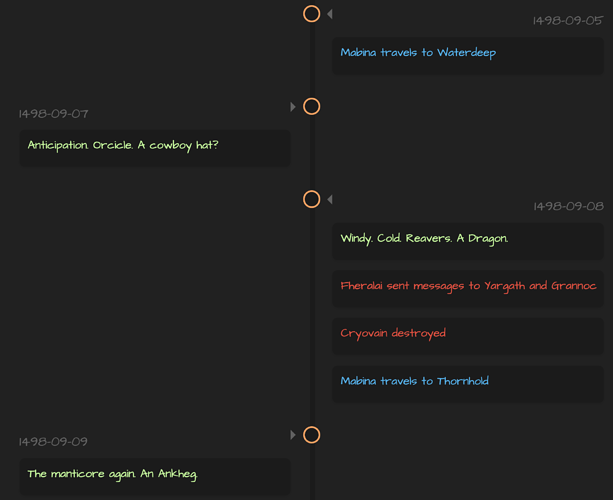 Very nice! Definitely going to tinker with this and take some inspiration. I’m still playing around with my campaign organization, but I think this combined with the Dataview setup linked above is a good start, especially for the Compendium information. My notes are another story

I’m a bit late to the party here, but I’m a DM that uses obsidian for my games. My general workflow is after each session I write a summary on what happened. Then, I create corresponding notes for anything that came up over that session and publish them.

I’ve tried a bunch of ways of hiding information I don’t want my PCs to know but eventually settled on simply putting that info in a comment on the note itself. For example here’s my notes on location called Wulvdin.md (1.1 KB) and here’s the published version. Sadly, this required me to turn of the graph on the publish site as any links in the comments will still show up there. Overall I’ve been happy with publishing my notes. It’s been a good way to establish what is and isn’t “common knowledge” in your world/party as well as ensure everyone’s on the same page info wise. I’ve actually had a few times now where my PCs made a connection using information on from the public notes that they had forgotten.

I do also maintain plenty of notes that my PCs don’t have access to such as locations they haven’t been to, random tables, PC information, and most importantly info about the current quest they’re on. For example, the first major plot line my PCs embarked on was a mystery. I kept a note with a list of clues to help them as well as some scenarios I could throw at them when they inevitably get stuck. This was immensely useful as a north star and allowed me to seed hints where I could without having to railroad my PCs into places to find the pre-hidden clues. Generally I like to build in a degree of vagueness into all my notes so I can be flexible at the table and run with whatever ideas strike me at the time. Here’s the quest line note I was talking about.
Failed orange sky in Dortrum.md (1.6 KB)

One thing that’s been really useful to me is to have a note called scratchpad where I write random things that came up during the session as well as damage calculations for enemies. Then after the session I go through and make more complete notes about that thing. For example, during one of first sessions I came up with a librarian called Cognira wrote this down during the session:

Then after the session I developed the full note for me to publish on the website.

What follows isn’t isn’t particularly relevant to obsidian, but it’s something I highly recommend doing. I created a short, 1 page world description that set the tone of the world and whom they would be playing. Then I let my PCs build the homelands and cultures of the races they chose to play within the setting I created. I was still there to talk them through the process and ask the occasional leading question but they were the deciders of what their race was like. It creates a real sense of investment in the world when your players are able to say that those are their people and that’s their land. It also makes narrative sense at the table that the different PCs end up being the authorities and end up knowing the most about where they grew up by default.

Hopefully you found something in my ramblings useful and feel free to ask any further questions.

I’ve been debating Obsidian publish to publish my “Compendium” notes but was hesitating because of the private info - good to know you can hide it in comments, thanks.

As an aside, do you know if plugins work in Publish? I’d like to keep my maps I display for my players.

I’m not sure exactly how publish works with plugins as I don’t use any plugins that add additional content. All of the plugins I use personally are more geared towards making things easier to edit/create (Ex. the advanced tables plugin). But worst case scenario you add images of your maps inside of your notes with “![[]]” notation.

Yeah, I can’t find much info out there. My guess is no, they don’t, just because they’d have to recreate API hooks for the browser environment (some of which wouldn’t be available outside the electron instance).

I was specifically talking about my maps plugin, which I find is very useful since this is my groups first campaign in Eberron - helps keep track of locations a bit easier.

My guess is that it wouldn’t work as well. I believe iframes do work in publish so maybe there’s some way to jerry rig sometime similar though. But have fun with Eberron. IMO it’s the best official setting.

Do any you fellow gamemasters use zettlekasten ?
just read about it today and learned about obsidian yesterday also im finding comments and blog articles choosing foam over obsidian but i cant really figure out why?
I started using slyflourish’s notion.so template for session prep about 14 days ago and really like it, but then i saw the graph view of obsidian yesterday and immediately thought of how that would be so useful for relationship mapping as everything in a setting is related to something. so thats how i got here, now im trying to figure this zettlekasten out as the concept of using knowledge to create new would fit a running rpg campaign really well.

Just wanted to let you know, I released a plugin that allows for 5e-styled statblocks. Check it out and let me know what you think! 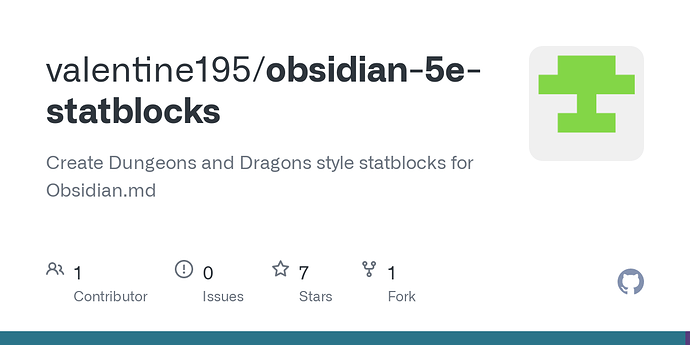 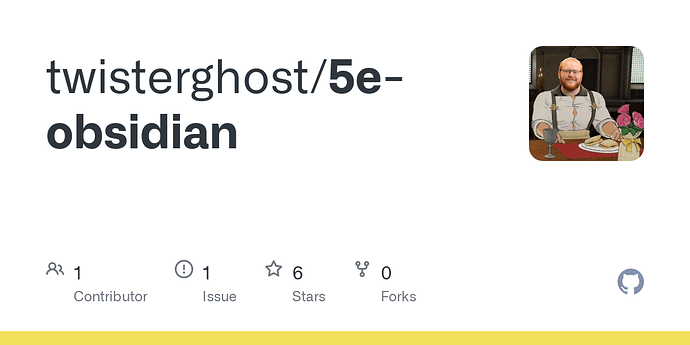 Contribute to twisterghost/5e-obsidian development by creating an account on GitHub.

There are some really great ideas here. I especially like the timeline option. For my part, I use Obsidian for my notes as a GM. I don’t share them with my players. I have been using my notes to try implement the Lazy DM methodology, and combine that with atomic notes that I may reference in multiple games.

Lately, I’ve been incorporating the Dataview plugin for more dynamic data feeds into my notes to reduce duplication.

I created a video a while ago (this predates my Dataview use) that you may find helpful: How I use Obsidian to prepare for and run my DnD games - YouTube

THIS IS INCREDIBLE! THANK YOU SO MUCH FOR MAKING THIS. It’s rad as hell!

A couple of questions:

is it possible to also import other things from 5e such as spells and items?

Not at the moment, but that’s certainly something I could extend support to. There isn’t currently a good syntax for displaying them either - though I guess just making everything a trait would work okay.

How would you suggest accessing/exposing the various stats from something like dataview?

So, I think Dataview in the JavaScript API exposes the Obsidian app object on dv.app. If so, the plugin’s data would be:

Also, I was just about to come back to this thread to tell our fellow gamemasters that I just submitted a new TTRPG-related plugin to the community list - an initiative tracker!

It hasn’t been approved yet so you’ll still have to install it manually, but check it out here: 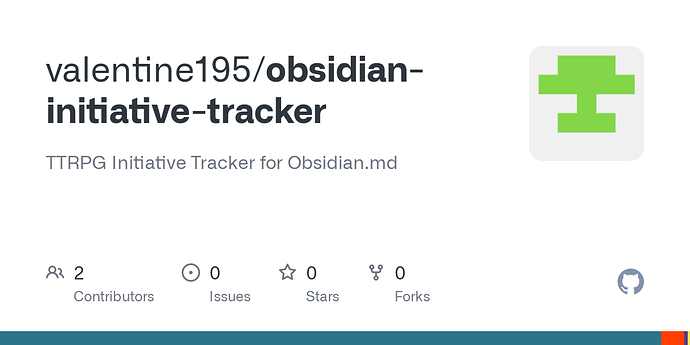 TTRPG Initiative Tracker for Obsidian.md. Contribute to valentine195/obsidian-initiative-tracker development by creating an account on GitHub.

Is there a way to use your dice roller code with the 5e stat blocks?

For example, If I wanted to use random 1d6 Hit Points when I load up the preview?

Any timeframe for your Initiative tracker being approved?

Thanks for all the tools. You are making great plugins for us all!

Not at the moment, but I’ve had a few requests for that so I’ll work on adding it once I have some time!

A ny timeframe for your Initiative tracker being approved?

This really depends on if the reviewers request any changes, but hopefully soon.