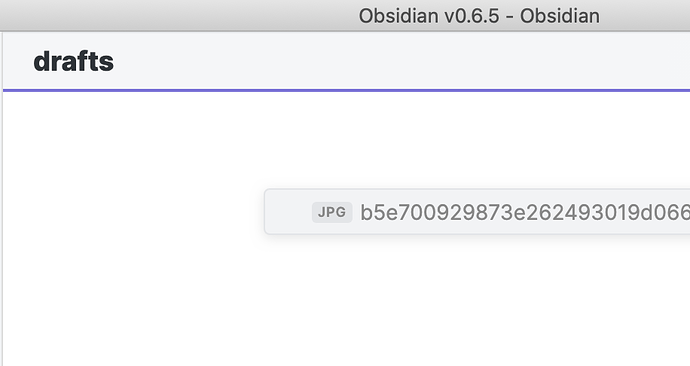 I hope this is a bug… Or this is a major design flaw, which is worse (IMHO).

4 Likes
Dropping a file from the file explorer into the editor generates a link at the cursor location
Drag & Drop from File Explorer to open page for an Internal Link
Drag and drop images from within obsidian
WhiteNoise June 1, 2020, 3:58pm #2

thanks, we’ll look into it.

Certain file types are not added to the attachment folder
Valery_Kondakoff June 1, 2020, 4:09pm #3

Looks, like the drag and drop from File Explorer to notes was not planned at all, so this issue is more feature request than bug report.

Correct, never intended it to work so I don’t think it would be a bug report.

An additional variation could exist for tags, where you drag a tag from the tag pane into the editor say #tag and it drops the very same value into the cursor location- in this example #tag

I was trying to do the same thing the other day and expected it to work.

Drag&dropping attachments: I wonder if you would consider automatic renaming of such images, so that there is some uniformity in the attachment folder? (something like a ZK code for a filename with some prefix, like IMAGE20200807105053.png (or, whatever the extension is))

I have a folder with images. I want to insert one of those images into the markdown that I’m currently writing so I drag that image onto the markdown and would expect that it gets linked into the text.

I need to write down the full path of the image by hand.

Hmmm. This is interesting.

I drag and drop image onto a page. It shows as ![[image]]. On preview nothing appears.

Images previously dragged are working fine.
So edit mode says it is there. The image is actually in the attachments folder. But nothing on preview

And now suddenly it is working again.

So now working again for me. I always found this was the way it worked, so shouldn’t need to be a feature request. But wasn’t working for a while.

Well, this is what it looks like for me. -> https://imgur.com/FCnTSur I’m using OSX btw.

Ah, I misunderstood.
Drag and drop works for images outside the vault.
When the image is in the vault, it needs to be selected (since it is already present, there is no sense in it being added again), so that’s just a ![[ and selecting from the list which will appear. Won’t need to be typed - though a few letters will speed filtering.

If you are already writing, that’s actually likely to be faster than any drag and drop since there’s no need to use the mouse and no need to find the file.