[Advice] The ability to have a note hierarchy

Currently (at least on Linux, where I use version 0.9.20), it doesn’t seem to be possible to drag a note to a master level and pull a note that is the head note to a sub-note level.

This would be very useful to do, when you want to convert a master note (or head note?) into a sub-note of a different, newly created main note, which occurs to you sometime later.

Simply put, it seems that currently it’s not possible to reorder the hierarchy: 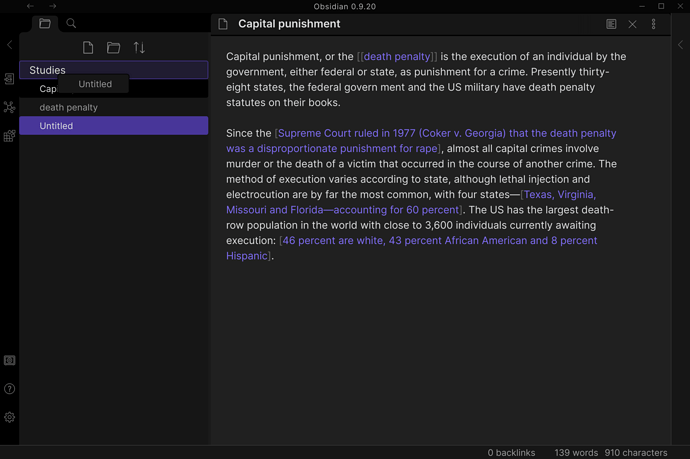 I’m not sure I get what you’re requesting; Obsidian works with folders and files. Doing what you ask would require to add outliner capabilities to Obsidian, which, while cool, would require tracking documents through an internal database. This subject has come up several times, and doing so would go against the whole point of using user-accessible files.

would require to add outliner capabilities to Obsidian

Sorry, I do not mean an outliner in a typical sense.

Rather, I simply mean to have a free-flowing sorting option. A user defined/changeable sorting of files, which is neither according to filename, nor modify date, but rather that it can stay in a position into which the user puts it as they wish.

For example, if the file untitled is the third file in the folder upon creation, that its position can be arbitrarily changed to a position 2 (while what is now a second file would jump to the free third position for example) regardless of the fact that it was actually created later, these two files would exchange positions in the explorer, even though they do not meet creation, nor filename sorting criteria.

As it stands now, the file in the third position according to the date of creation is always third, no matter what.

The application could simply track what number out of all files in the folder a certain file has (for example untitled is 3), and if that position is changed by the user to the second position, then untitled becomes 2nd, while death penalty (as per the screenshot) becomes 3rd.

This is not a high priority, just would be useful.

Feel free to reject/close this topic as you see fit, I won’t mind.

So yes, that’s what I understood; I honestly would very much like that myself (a custom ordering of files would allow for outlining capabilities). But doing so would require Obsidian to have an internal data model and and as far as I understand, that’s not in the cards (at the moment at least).

File Explorer is just for browsing file system which does not support custom ordering unless you add some alphabetically sortable prefix like a number to each filename which is very inflexible.
More proper way to do it is to create new note named e.g. Outline1 and populate it with list of links to each file you want to include.

Suggested order of files ↑ would also need to be stored in some file so this is effectively implementation of this feature. Although there is still a lot of space for automating this via plugins. For example syncing folder content with note content might be desirable.
Edit: one attempt is done here: Folder as markdown note

Now instead of files, you are reordering the links. There are customizable hotkeys to Swap line up/down, set them to Alt+Up and Alt+Down.
This allows you not only to reorder but much more.
You are already seeing pop-up preview of each file by Ctrl+Hover over link.
You can duplicate the outline and create parallel alternative order while still pointing to the same single original instance of each file.
The list can have header and YAML metadata.
Each file can be annotated by adding text around the link and then see comments from all outlines collected in file’s backlinks pane.
You can separate files to groups or indent one under another to create nested list,
Make more important **[[file]]** bold,
Present file by another text than filename using piped syntax [[filename|nice text]]
Each file can be referenced in multiple places within one outline.
…

On this forum, similar files are sometimes refered as “MOC” (Map Of Content).

Obsidian has flexible system of panes that allows to drag opened “Outline” note (icon next to header) into left foldable pane so it behaves almost like the file Explorer. There is also Andy mode plugin

Nice implementation of multi-level hierarchical notes: https://gingkoapp.com/
What I would miss from it for general note-taking is inability to show one note in multiple places due to hierarchical nature. In Obsidian, it is possible to display content of one note within another via transclusion/embeding syntax ![[filename.md]].

Proper way to do it is to create new note named e.g. Outline1 and populate it with list of links to each file you want to include.
(Suggested order of files would also need to be stored in some file so this is effectively implementation of this feature request.

Thanks for this detailed write up. I know about Gingko app. However, I like the [[linking]] and search capabilities of Obsidian, the two apps have a different purpose, that’s not a bad thing.

You could put some of the hierarchy in a “top-level” note:

Then turn on “Fold heading” and each of these levels is collapsible, and you just put each new note into the right place in the hierarchy: 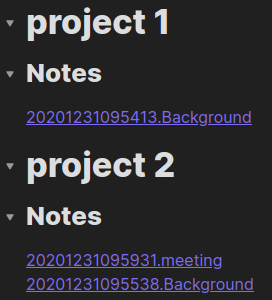 You could put the notes in-line, but that would make for a really long document. I prefer to rely on displaying each note with the hover action. Each note can continue the header hierarchy at level 3 (###) for consistency. Set a key mapping for “Fold all headings and lists” (control/command-p) then when you want to navigate to a particular project / task / topic, collapse the entire outline, then find the top-level item you want, and drill down from there.

This is the relative feature request
https://forum.obsidian.md/t/allow-manual-ordering-rearranging-of-file-explorer/6908/22