Create or open today’s Daily Note in 1Writer on iPhone or iPad with this Shortcut:

Requires 1Writer (obviously) and your Vault files added via 1Writer’s internal Dropbox integration (i.e., not as an External File Provider via iOS Files, as 1Writer’s URL schemes won’t work with those folders.

Hey, I really like your shortcut! However when I run it it will always create a new Daily note instead of opening the existing one. It also switches back to the shortcut app after creating the new note in 1Writer.

Do I have to change anything else in the shortcut other then the path to the Dropbox folder in the second panel?

Hm. When did you download it? I updated it a few days ago because I noticed some minor errors.

Actually, I just noticed another minor mistake (using Open x-callback-url instead of just Open URL) and fixed it. Link in the OP is updated.

ah, you were pointing out that error:

It also switches back to the shortcut app after creating the new note in 1Writer.

That has been fixed.

I tried your updated Version and now it works perfectly!
Thanks

Hey bro, this is great!
Sadly I don’t have access to Dropbox in China but I have iCloud Drive.
Also, I’m using Bear/Ulysses (Mac/iOS) for markdown writing.
Is it possible to create / open today’s Daily Note in Bear on iPhone / iPad with a similar Shortcut? If so, is it possible that you create one for Chinese users like me?

How does Bear sync with Obsidian files? I haven’t used it in years.

Is it possible to make this work with 1writer on iCloud Drive? Sandboxing might be an issue, but maybe there are any workarounds?

To reiterate: this can work in iCloud Drive, but only in the 1Writer app folder.

That was a no-go for me! I’m not really sure why…

The Get File block seems to come hardwired to only work with the shortcuts folder on iCloud Drive. Though I could be, and probably am, screwing something up. 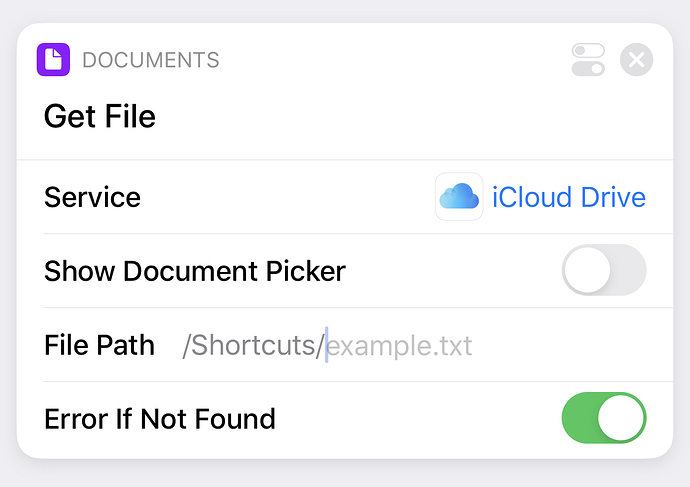 Right, sorry. I have gone through all this, just forgotten it… I was wrong above, it must be in the Shortcuts folder in iCloud Drive to use the Shortcut as I’ve created it.

As you’ve discovered, Shortcuts’s Get File action sticks only to the Shortcuts folder in iCloud Drive.

In theory, you can use URL schemes in 1Writer to get at files elsewhere in iCloud Drive. However, I just spent 20 minutes fiddling with it (again) and there’s no way to get 1Writer to check if a file exists without throwing an error that breaks the shortcut.

I could build this for you if you’d like, but it isn’t that complicated. The logic in the shortcut remains mostly the same, only you would need a menu for “Create” or “Open” after you select from Yesterday/Today/Tomorrow. The choice of menu would change the URL scheme action you want to use.

I’ve got to get something working well. I’m hardly at my laptop over the summer which makes using great desktop apps like Obsidian bitter sweet.

I’ve been considering using Roam until the obsidian mobile apps are ready and then moving back. It seems to work on my phone and iPad. But it feels like joining the side of evil.

The limitation of Shortcuts to write in files anywhere outside of Shortcut’s own iCloud folder is what made me get 1Writer. Since I only append to my daily note (which also as a side effect opens it) and my daily note is the first thing I create on my computer in the morning, so it always exists, I didn’t think of the case where it is absent.

I just tried using the same append action in the url-scheme but this time tried for a note that doesn’t exist (tomorrow’s date) and it ended up creating a new note for me. So perhaps, using append instead of create is the solution @ryanjamurphy!

Awesome. Thanks! I’m going to try to put this together.

Append works. It’s a bit of a hack, so 1Writer will open twice as it “Appends” to the file first (though it is hard-coded not to actually add anything) in order to make sure it exists, then opens it afterwards.

Note that this still can’t work with arbitrary iCloud Drive folders. 1Writer’s URL schemes can’t operate on those… I have talked to the developer on Twitter about it. ;_;

Good luck! Here is mine.

You can ignore my shortcut and just use @ryanjamurphy’s v2. That seems to work quite nicely! Just goes to show that multiple people approaching the same problem from different angles always works wonders.

Ironically just wrote my own solution to this very conundrum (how to start a daily log on iOS). While I also use shortcuts + 1Writer, I ended up doing a different approach:

Run a shortcut that:

Then in 1Writer I have a JavaScript action that

With that, I’m down to just a few button presses:

Given that I have to do #3 anyways, I may just switch to creating the file in shortcuts, use the xcallback to load it in 1 writer and then again handle the move to the right folder in 1Writer to save a button press.

Thanks for the tips!

Interesting. This reminds me of using Day One which automatically added things like location and weather to my daily journal entry as well. Curious about how you’re handling the same on the computer side? Surely, Shortcuts makes it much easier on iOS than anything currently on the Mac. We can do a lot with scripts but it’s more work.

Then in 1Writer I have a JavaScript action that

I think you can replace these steps with just using their URL scheme to create a new note which automatically fills the note with the clipboard. Here’s a bit of info from their documentation,

Thanks for the tip on the url - much better. Now if only the ability to create the doc in another location was there.

To that question, the Dropbox solution is good. I already had to make that compromise for a different work flow to use google drive - and now have to deal with sync issues between drive and iCloud. Adding Dropbox seems mind numbing.

I use shortcuts now to take care of all the different forms of notes, and also have them log their creation automatically in the daily notes.

On the PC side, thus far I have left it as mostly manual and not be too rigid in making sure the same template is strictly followed. In the instance of the daily, honestly, thus far I always use and iPhone and iPad to start the day, so hasn’t been an issue.

Basically I’ve found that all my creative, dynamic and quick joy interactions have been on mobile devices - in which case the automatic logging and shortcuts work great.

For dedicated higher level thinking (I call it ZettelTime

I use obsidian, and in this case it’s all about fleshing, linking and tagging. For that I don’t need the automation, beyond writing a python script or two (Which I’m hoping one day I will be able to launch from inside obsidian via an action link - just haven’t figured out how to make that work just yet.)

Thanks Rishi for your feedback - it’s fun to see how similar our setups are.