Two different link types for using Obsidian as a Zettelkasten

At the moment, there is only one type of link as far as I have seen. But the Zettelkasten methodology employs two types of links that are important to differentiate. I want to switch from ZKN3 (which has implemented the differentiation between the two types of links) to Obsidian. Thus, at the moment it is no possible to differentiate between a link to, on the one hand, a following Zettel/note/file (“Folgezettel”) which establishes a Zettel/note sequence (e.g. an argumentation) and, on the other hand, a cross reference (“Querverweis”) (link to another location that is not directly part of the Zettel/note sequence).

Because of that, the graph view displays every link the same. 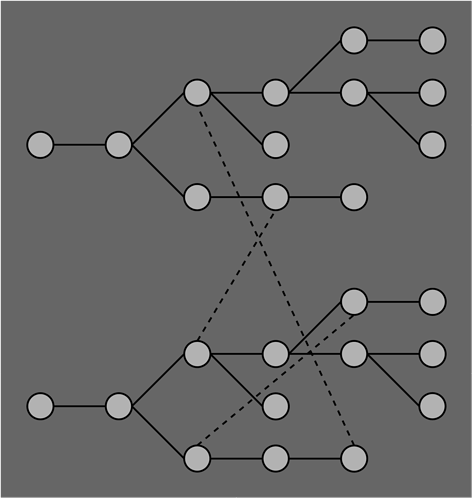 At the moment, I bypass this problem by manually adding “antecedent/previous zettel” and “subsequent/following zettel” (each with [[x]] links) at the end of my notes.

The idea of Folgezettel (wich gives you the tree-like structure) is not something that is really needed for a so-called zettelkasten. You are refering to a method that Niklas Luhmann started to use, mainly based on the physical properties of his implementation (a physical zettelkasten) - it was easier for him to organize and find related notes in that way, but - and this is an often overlooked information - in his later days he prefered cross-referencing and switched his method more and more.

The ability of the concept of Folgezettel, to show trail of thoughts / arguments can be also done with “normal” links. It can be done through meta-data, and it can be done in naming-conventions for files and most likely many other ways.

To say that a tool is or isnt a zettelkasten based on the missing feature of a very specific way to link, that even his creator started to abondon in his later years is - well, misleading.

But this is a debate that was done dozen of times in many different forums, so i wont add much value here - but back to your main-issue:

To visualize a tree like structure, it might be possible to use mind-maps (there is a plugin that rendered them) - if its more about seperating different lines of thoughts - its possible to implement the naming convention in the file name (so in the file-explorer it will show you the hierarchy).

Beside this, there is really not much difference between a folgezettel and a cross-reference. The link itself is just a link. The underlying structure is done through other means (note naming).

Overall i dont think there is much to gain with trying to implement a special way to link, but there might be other use-cases where this is more interesting.
Personally i think something like weighted links might be interesting to test out
(like a link is given some number that indicates his strength / importance) - this way it would be possible to differentiate between different types of links.
But i doubt there is much to gain overall from this kind of system.

The claim that Luhmann abandoned the concept of Folgezettel is new to me since the relevant literature about implementing this methodology into a working process for scientific research and knowledge management (e.g. Ahrens: How to take smart notes) does not mention this.

Yes, you could consider Folgezettel links as not qualitatively different to cross references but rather quantitatively more important (as “strongest link of all links”). But even that should be represented in a clear way. Is such a weighting of links planned?

Thanks again for a statement.