A transclusion in a note does not show up when that note is embedded/transcluded in another note.

I know it is not possible to transclude an infinite number of levels, but 2 levels does not seem exaggerated.

Or perhaps a customisable number of levels !

also currently, a 2nd level transclusion has only the option to be ‘opened in default app’, I would also like an option to open them in an Obsidian pane as any other docs from the vault.

I would also like an option to open them in an Obsidian pane as any other docs from the vault.

Absolutely, that is essential.

Yes!!! I would love to have this feature !

+1 – multi-levels transclusions are essential IMHO. Without them, PARA, at least as expressed in the flat file system workflow, is not nearly as useful. Likewise, when including reading notes into more meaningful thoughts, to be included into still higher levels combining and exploring thoughts.

After Level 1, transclusions / inclusions become a friction point, that is only exacerbated by the link that is available on level N+1 is to an external default app.

Yep, it’s kind of inevitable with any linked system of knowledge. Eventually, you’re going to transclude a note that has a note within it. It doesn’t need to be infinite, but it should be able to resolve at least a few levels. Maybe make it a user-configurable level?

Actually, I don’t really see why it can’t go to an arbitrary level of nests, at least as long as the indentation and aesthetic stops looking “nested” after a while. (Eg. Reddit eventually stops indenting replies in a thread.) At some point, it’s just up to the computer’s memory whether it can get to that level of transclusions or bottoms out, right?

Has this not been implemented yet? I could’ve sworn I saw a post somewhere in the forum where the note was successfully embedded in the transcluded note. Tried it myself but it didn’t work. The post might’ve come from a custom CSS showcase, but irdk.

Tried it myself but it didn’t work.

You have now proved yourself it does not work, and it really does not, as the other commenters also confirm. Hence this feature request.

Apologies, I did not get the idea. Can you give a small example 2nd level transclusion ?
This might be very handy for my workflow so just needed some clarity

Let’s say you have note 1 transcluded in note 2. Now you want to transclude note 2 into note 3.

But what you get to see in note 3 is the content of note 2, and just note 1 title.md

wow This is quite nice idea. Thanks for your clarification

an example using tiddlywiki (content/edit mode on the left, preview on the right side) 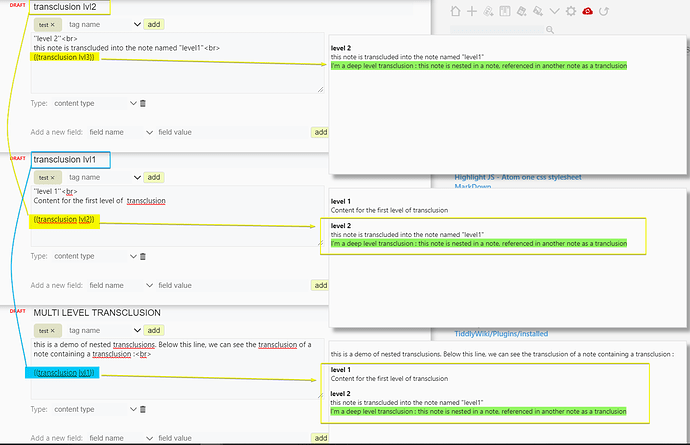 provided that transclusions are more seamlessly integrated to the core text, the use cases can be very broad. In tiddywiki, I use multilevel transclusions for code snippets, rules for board games that share similar concepts, tracking things & to do lists : embed a task in a day,embed the day+task in week, embed the week in a month, then embed the same task in a project, etc… and it works beautifully since the transclusions are seamless.
there are no visual delimiters between normal text and tansclusions (a transclusion could be a single word embedded in a sentence).

I was under the impression that Jeremy Ruston had limited the level of transclusions to 2. Has that recently been changed?

it seems there are ‘infinite’ levels of transclusion in TiddlyWiki5 according to J.Ruston, the only limitation being recursive embeds (I never went deeper than 5 levels for now, but I can make a quick test if you want) :

You can nest transclusions as deep as you want. A transclusion recursion
error results when you try to transclude a tiddler that has already been
transcluded in the same stack. In other words, if A transcludes B, and B
transcludes C, an error message would be displayed if C tried to transclude
A.
— Jeremy Ruston - https://narkive.com/6ceXhLK2.5

No, it is not necessary to test, I don’t and won’t use TW anymore.

Ruston’s statement makes sense because what he is saying is he wants to effectively avoid what is called in Excel a circular argument, which I did not realise when I made my comment to you.

Thanks for your feedback.