Spell check in various languages or change from English to another

It would be great to have a spell check in other languages besides English (US), for example Spanish, French, Germany… like MS Word or Libre Office.

I have my notes in Spanish and English and to work with the English corrector is very annoying.

This is implemented in 0.13.7 (Which is still currently an Insider build)

Live preview improvements Spell checker languages can now be changed on Windows and Linux. On MacOS, the system native spell checker is used, which automatically detects the language. Spell checker will now skip over things that shouldn’t be spell checked, such as code blocks, links, and math blocks. Improved code block syntax highlighting colors. Fixed fold all command not folding inner folds. Fixed heading folds does not load sometimes, causing the fold state to be lost. Fixed frontmatter no…

I am new to Obsidian and totally fell in love with it! I’ve run into a small-ish problem with the spellchecker, which doesn’t recognise the British language setting on my Mac.

On Mac, I have set the language in System Preferences > Keyboard > Text to British English. 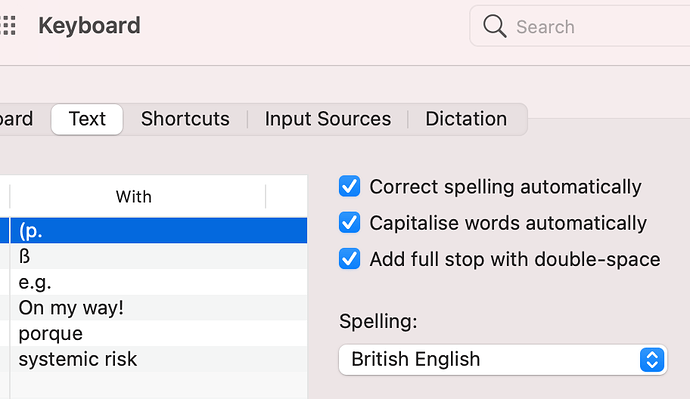 However the spellchecker still underlines words with British spelling with a red squiggle line.

Is there something else I need to do to get Obsidian to recognise the Mac language?

Thanks in advance for your help!!