The deadline to nominate is end of day on December 15, Anywhere on Earth. Reply in this thread to nominate.

If you’re nominating multiple entries, please make sure to submit separate replies as we’ll be linking to your reply when voting. Thanks!

Nominate your favorite theme. The theme needs to be in the community store to qualify. Plugins that have won in the past years cannot enter again either (namely, Minimal and Blue Topaz). 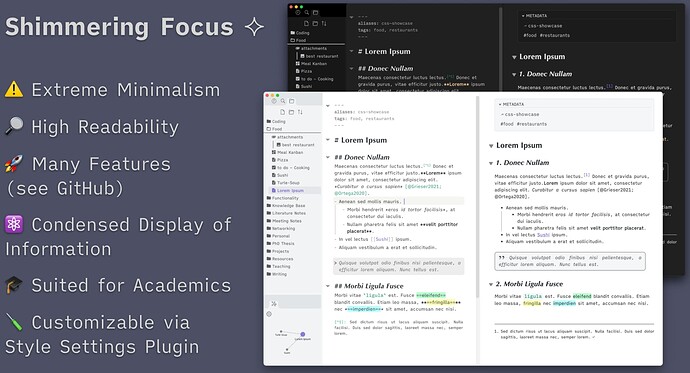 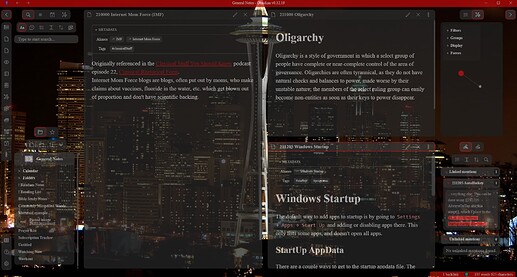 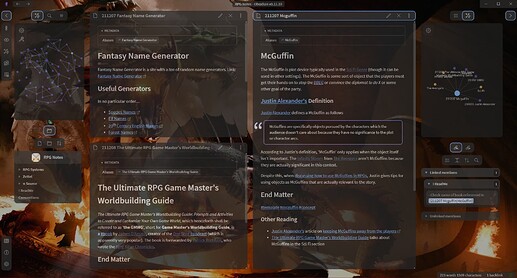 I was a hard-and-fast believer in the base obsidian theme—it was sleek and wonderful. I loved (and still love) the base theme, almost looking down on those who felt the need to change their Obsidian theme. The Prism theme changed all of that for me. As soon as I saw it I fell in love, wasting time I should have been using toward actual work just setting it up and I see no reason to ever go back. 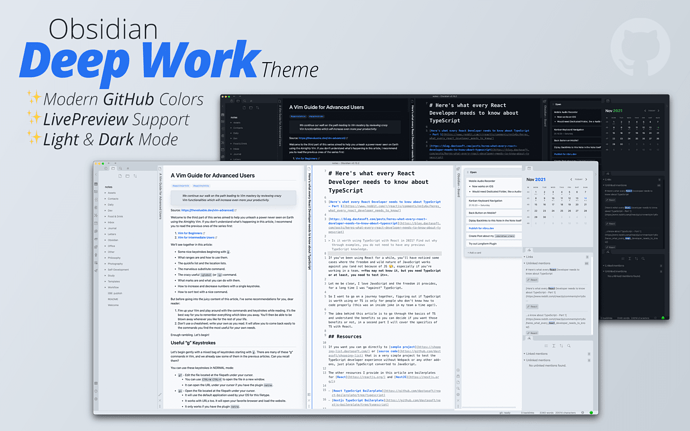 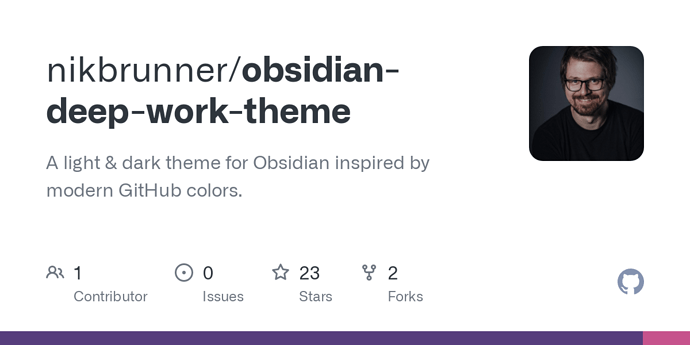 I am the author of this theme, and it is my first publicly used project I have written. It was a great personal journey for me, from the first thought of something like this to a 1.0 version.
I was anxious, but it was all worth it, and therefore would like to conclude 2021 with the nomination of this personal project.

Thank you everyone who tried it out!

My favorite theme is Primary. 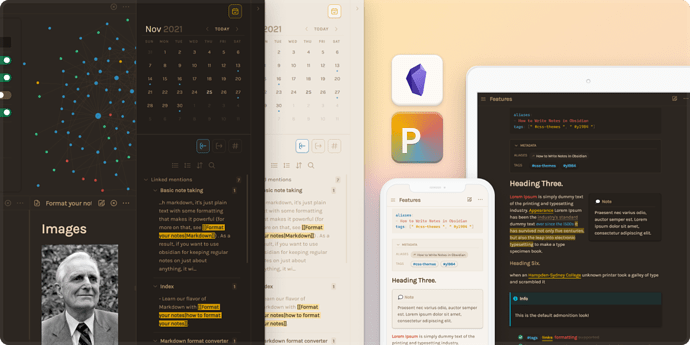 GitHub - ceciliamay/obsidianmd-theme-primary: Primary is a warm, playful but...

Primary is a warm, playful but productive theme for Obsidian. Its colors were inspired by Bauhaus, Scandinavian interior, and yellowing retro magazine pages. It has been described as chill and havi... 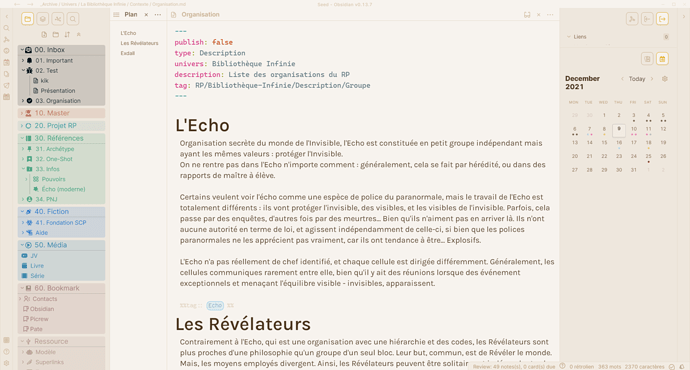 The light color is pretty good for my eyes, and I love the use of icons. It gives me some “fun” vibe, and warm. I use it on all my support, and I pretty love it.
Also, the Karla choice for the font is pretty good and, now, it’s my favorite font !

I can’t get enough of the Typomagical Theme. 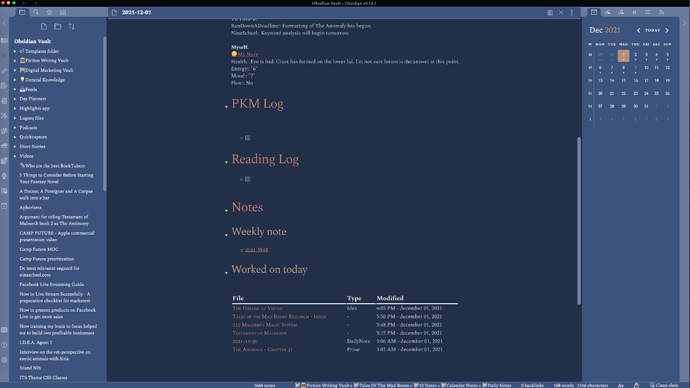 I feel inspired when I put on this theme. The colors, the capitalizations, the font… everything just triggers me and I feel like jotting down an idea for a story or a story.

Yin Yang, because, with Style Settings, can be made into iA Writer with the goods and joy of Obsidian.

GitHub - chetachiezikeuzor/Yin-and-Yang-Theme: An Obsidian.md theme with a stark contrast between dark mode and light mode, much like the Yin and Yang symbol 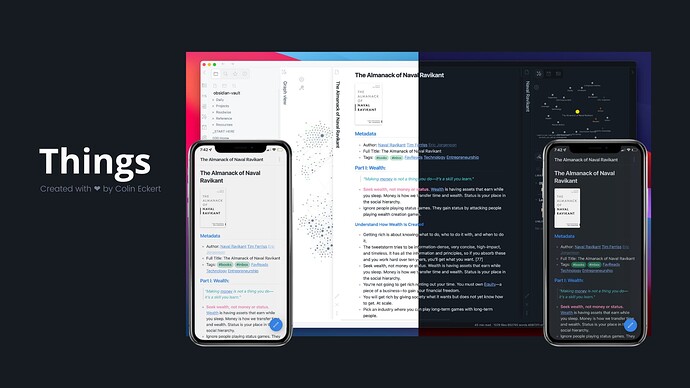 As the dev acknowledges, Things is based on Minimal (it even picked up my font preferences from the Minimal Theme Settings plugin) with some charming tweaks and refinements.

Things thoughtfully ghosts back markdown characters like ** in edit mode so they don’t compete with the words they’re formatting (most themes and even some otherwise polished native apps like iA Writer actually make ** bold with the word), and restores the word count to the mobile app. Another sleek addition on mobile is the relocation of the edit/preview toggle to a button that floats just above the right-hand side of the keyboard for easy reach.

But the most noticeable difference is the use of well-chosen colors for the headings and emphases. While Minimal’s monochromatic palette is ideal for writing prose, Things excels for to-do lists, project planning, and informational notes. It also retains Minimal’s compact headers, which maximize use of screen space, especially on smaller devices.

Be sure to give Things a try if you haven’t done so already.

Self nomination: Agora by me, Seraaron. 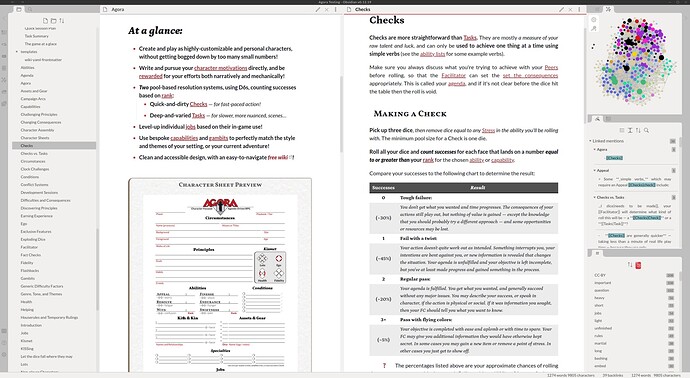 I made this theme to suit the style of the tabletop rpg that I’m designing of the same name. Being able to write directly in obsidian and immediately see how it will look on the website (and a lot closer to how I imagine it will look in a published book format too) has done a lot of good for my motivation to keep working on this project. Not only that but I’ve learned a lot about writing CSS that I didn’t know before, and am looking to start making my own website off the back of this knowledge too.

The theme itself is basically just a re-styled base theme with new fonts, colors, and some customized community code snippets, but I’m really pleased with how it turned out. Even though I use light theme, I made sure to make a dark theme version when I uploaded it to the community themes. So I hope others enjoy it too

The elegance, simplicity and attention to detail of this theme—in both light and dark modes—surpasses every other I’ve seen. I wouldn’t want to use Obsidian any other way. 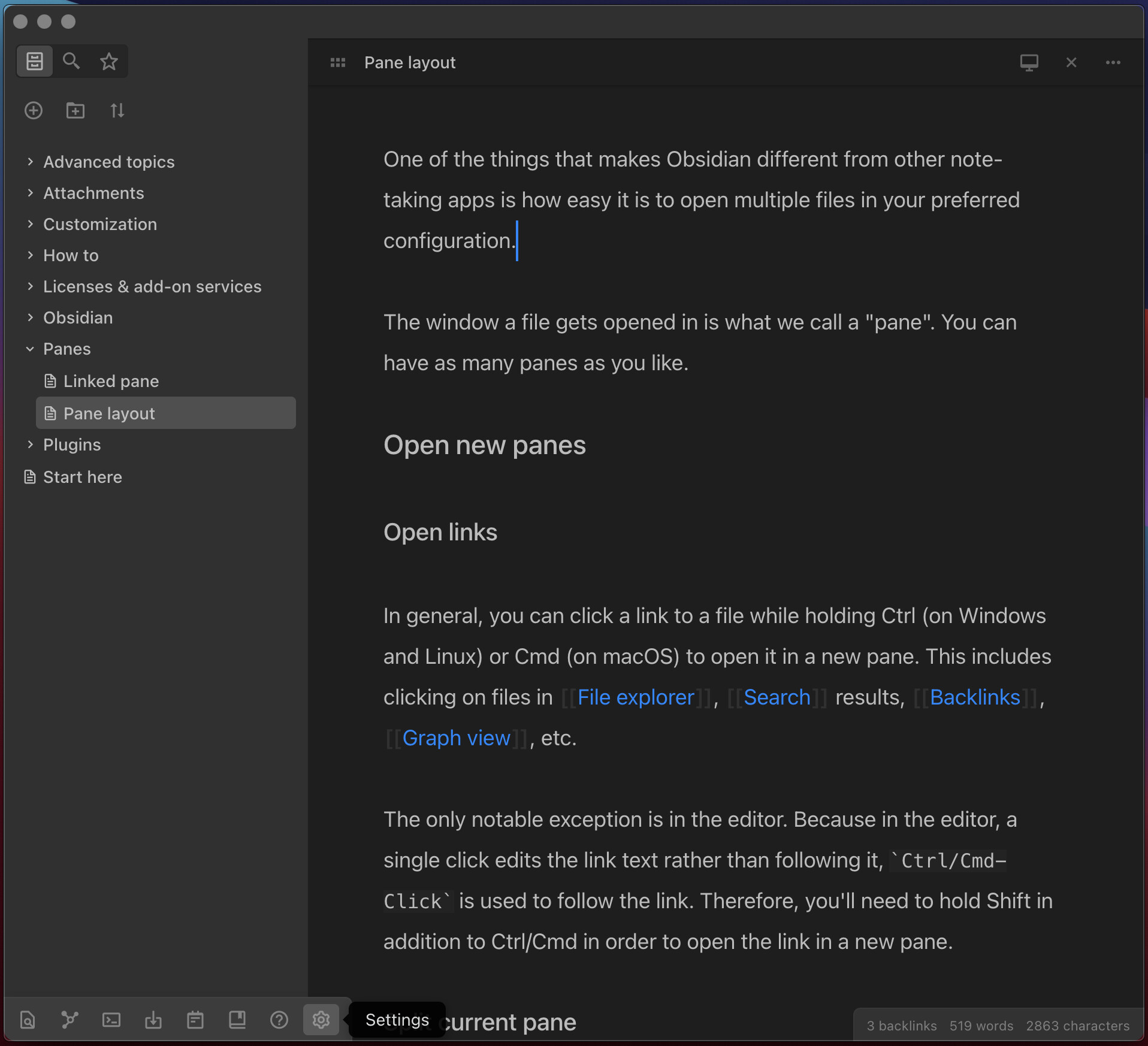 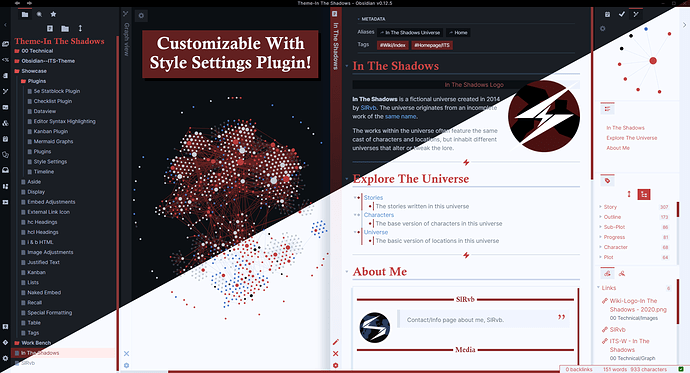 I mainly switch between Minimal and Things every now and then. They are quite similar and different tone/colours palette. 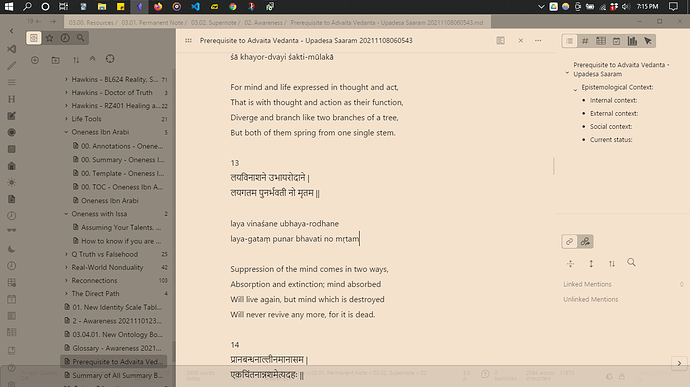 This theme is so beautiful and it helps me writing with no strings attached. The sepia color soothes my eyes and it helps me to relax. The font size is just the right size, not too big nor too small. I also like that the theme focuses on the right side of the editor (the editor plus the right sidebar), while the left side toolbar is muted. It gives me the impression of total abandon and control at the same time. It gives me the impression of writing in tumblr or medium or telegra.ph, which gives more importance to simplicity, but with Cidreira Coast, you will be spared from glaring monitor.

I am the creator of this theme which I originally submitted to Obsidian October '21. It’s my first publicly used project and was a lot of fun (albeit nerve-wracking). People really seem to enjoy it for writing as well as project planning and to-do lists, which align perfectly with my intention to capture the effectiveness and magic of the app which inspired my theme.

Overall, the reception has surpassed my wildest expectations and I’ve loved receiving both positive feedback and issues to address. I’ve tried to update the theme frequently to fix bugs and release user-requested updates like Live Preview and Style Settings plugin support, color customization, and native icons.

I’m deeply grateful for everyone who has tried it out and would love to cap off 2021 with a nomination for this personal project. Thank you!

Since I have Colin’s theme installed, I am always excited to open up Obsidian again to see how beautiful it is. 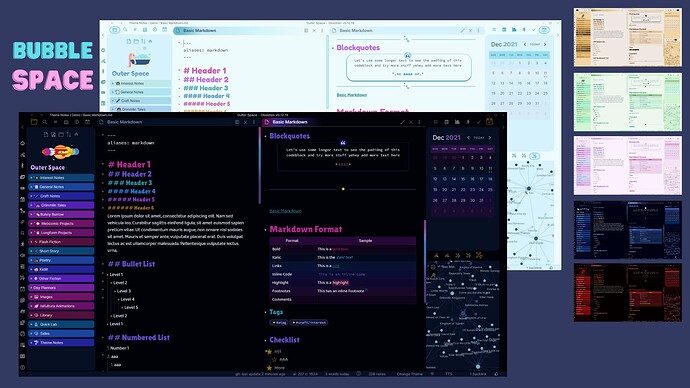 This is my Obsidian October baby, and the theme I made for my creative vault (for my fiction writing, etc). For me, the visual environment greatly affects my working mood so I went for a “fun theme= fun writing” vibe. The light mode is inspired by Bubbles and the dark mode by Outer Space and I love that there’s still so much more fun to be had with the theme by creating color presets (like Boba Milk Tea and Blue Christmas) and an upcoming Style Settings support.

The best thing though is accomplishing this theme with just copy, paste and guess (and a lot of help from the community

), as well as looking forward to my theme’s development

I’ve long been a fan of the clean design aesthetic behind the Things app, and the Obsidian theme wonderfully harks back to it. It’s modern, minimalist, clean, with subtle details that are brilliant — bullets, arrows, numbered lists all have a deep grey to them that has them distinguished from the body font, the iconography is clean and wonderful. The color combinations are well-designed. And as someone who knows a thing or two about design and CSS, Things serves as an amazing base upon which I could easily make my own modifications, tweaking in small ways to my personal preference with relative ease. A wonderful, wonderful theme that when paired with key extensions like Hider has Obsidian achieve a more Mac-friendly app design feel that I absolutely adore.

+1 for Yin and Yang Theme

@gdigesu thank you for the nomination! 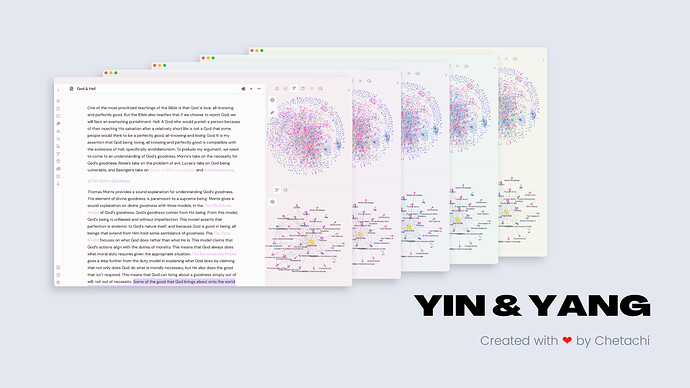 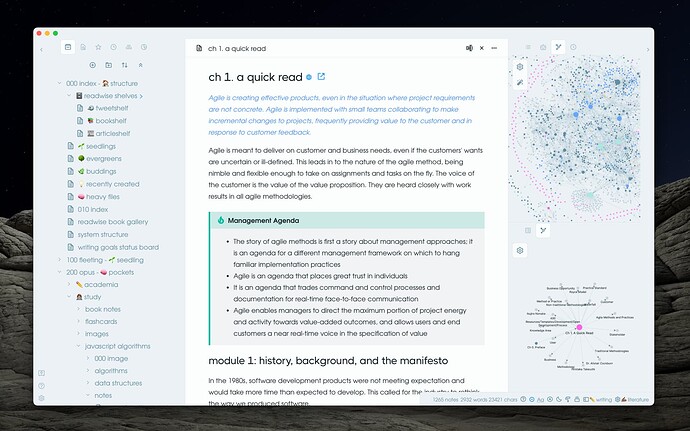 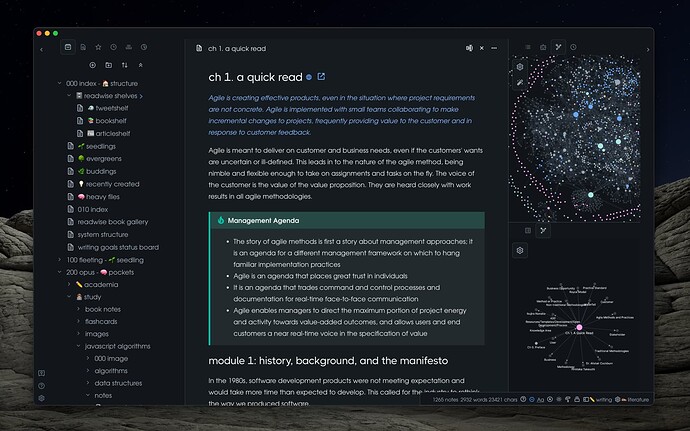 Yin and Yang is a theme I created from scratch earlier this year. I actually built it by the request of my younger sister, who just started high school last semester. I’ve been helping her build a PKM system in Obsidian for her studies, including building a theme that would fit both of our design aesthetics. From this, I was able to create something that the both of us loved to take notes in. I then posted screenshots of this theme in the Obsidian Discord, and quickly received messages asking if I would release it publicly.

Since then, I’ve been receiving messages from many users about how this theme has helped them fall in love with Obsidian, migrate their notes to Obsidian, and push them into accepting Obsidian as their note-taking daily driver. I’ve also received lovely messages from non-English speaking users telling me that this is the theme they recommend to their friends (which is the sweetest thing ever)!

This theme has also helped in creating a friendship between me and my friend @mgmeyers . We have collaborated on making themes more accessible to non-English speakers (Y&Y update soon come!) and also getting custom icons supported in Obsidian themes (which was super time-consuming, yet totally worth it, as it been widely adopted by other amazing theme developers)!

The amount of positive feedback that I’ve gotten from this one CSS sheet just encourages me to continue sharing with this incredible community. I’m immensely appreciative of all the support this theme has garnered, and I’d love to close off this crazy year with a nomination for my theme! Cheers

4 Likes
Obsidian Gems of the Year 2021 voting
next page →