Literature Notes - When to Leave Alone

Hey! First time poster, but over half a year of using Obsidian.

I recently started a new vault because my old vault was getting too complex. I was creating too much friction with an excessive number of tags and metadata, that creating a new note felt like a hassle. Organization was too top-down and notes were not atomic.

So I read “How to Take Smart Notes” and now want to make sure I’m doing it “correctly”. Below are some notes that I’m hoping to get some feedback on. 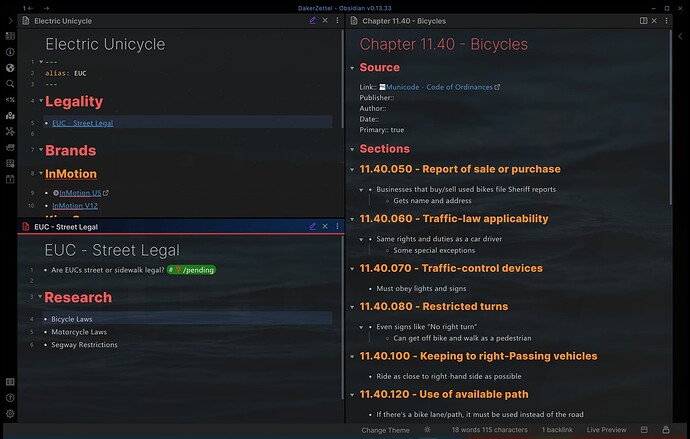 I created a literature note for bicycle laws in my city and did the following:

The next step as I understand it is that I’m supposed to take the literature note and turn it into atomic notes. e.g. Make a “Bicycles are Allowed on Sidewalk” note. This way I can link to each individual idea in the future in some other note.

But is that actually useful and worth the effort?

If I were to break it out to be atomic, I would end up making a “Bicycle Laws” note. From there, I would have bullet points leading to other notes, like “Bicycle Road Rules” and “Bicycles are Allowed on Sidewalk”. These would combine multiple regulations that I found to be related enough to be on one note.

Below, in the “Bicycle Laws” note, I put 2 ways to do a “Bicycles are Allowed on the Sidewalk” note.

Which would you do? 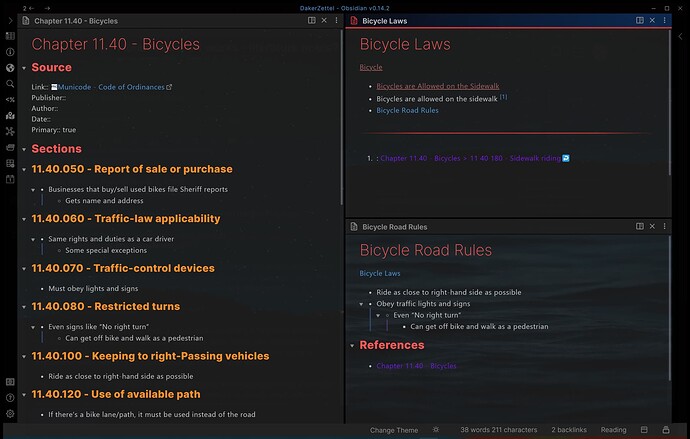 This is what’s slowing me down right now; deciding if I’m supposed to do more with a Literature Note. I feel like I’m duplicating work, because I already wrote down the regulation as I’d like it and these aren’t notes I would further expand on.

Do you ever just make a Literature Note and link to it directly, instead of making additional atomic notes?

It’s always the best idea to start with the book from Sönke Ahrens. As I learned from “How to take smart notes” it’s best practice to delete the Literature Note from the inbox after creating a Permanent Note from it. Here’s my workflow:

After I make a Litterature note, I reorganise information, take some part in bold and decide which informations become an atomic note in my zettel. You can use the refractor native fonction of Obsidian, to cut off and create notes from your litterature note already too.

I take this part as an intersting work of “digestion”. At first you eat and taste information - you take your litterature note and try to use your own words. After that, you digest like, like a catabolism process, you dissociate enormous mollecules to make smaller one easier to digest. They become the main body of my zettel, the atomic ones. I link the litterature note in the “source” bullet at the end of my note with an explanation. I create specific notes for context of the initial publication at the source of my litterature note, my thinking about the autor…

“Knowledge Catabolism” is a really fun part of the process.

But is that actually useful and worth the effort?

Useful in what context? What’s your goal? What tangible output do you want this note-taking process to result in?

The correct way is the one that leads to achieving your goal. So, I’d urge you to clarify your goal. Ask yourself why you’re doing this. Knowing your “why” will help you figure out what’s useful and discard what’s not.

I’ve been working through this same question for myself, and my answer, as it currently stands, is “it depends.” Different sources have tighter or less tight focus. If all the notes on a source are very closely related, I don’t think it necessarily makes sense to break them all apart. Without knowing what you plan to do with them and how deeply you work with bicycle laws, I’d be inclined to say your bicycle laws note is one I would probably leave intact.

But when the notes from a source cover a broader range of ideas, so that you’re likely to want to interlink them with different things from each other, it makes sense to break them apart. (And you can combine these two options. If you have a book about, say, “how to repair bicycle wheel rims,” and almost all of your notes are about the actual repair, but there’s a quote tossed in there somewhere that’s less tire-repair-focused, you can break that quote out and leave everything else in.)

The way I’ve been doing this is to take all the notes in one – like you have here – add logical headers to all of the sections, and then split the screen with the literature note pinned in one pane, and start creating new notes in the other page by cutting/pasting and plopping links to the new note in place of the cut-out text. (Yes, I know there are plugins that will split them all off, but right now I’m liking being able to see/control the process, so I’m doing it manually.)

Basically, I’m asking myself what the chances are that I would ever actually want to link to part of the notes from this book in any context that doesn’t include the rest of the notes in the book. If the answer seems like, “I’m rarely or never likely to want to link to only part of this,” I leave it alone – and no harm done because it can always be broken up later if I change my mind.

To give a specific example, I have a book that I took enough notes on that I broke it up into two because it’s so long. But it was originally someone’s doctoral thesis (I think), and has a very narrow focus on a four-verse section of the Bible. As long as this note is, when I refer to something from that book, it’s virtually always in context with other things from the same book because it’s just all so tightly connected. Could I atomize it? Sure. But why? It has headings, so if I need to link to just one section I can – but that virtually never happens.

On the other hand, I have notes from a book about wheat and health, and I broke all those apart, because they cover a wide variety of health-related topics that I make notes about all the time – wheat, dairy, the immune system, the liver, a few things about herbs & Ayurveda, etc. I know that I’m highly likely to want to link to certain sections in contexts unrelated to the rest of the book, so it makes sense for them to be separate.

Side bar: people are taking the time to respond to your question. You might want to acknowledge that at some point.

So, there’s a few things to consider here. First, yes, you’ve got the basic workflow down (according to Sonke, but more importantly, Schmidt, since he’s really the standard for learning about Luhmann’s practices).

But, now a question arises:

Are you planning on writing about this subject?
Luhmann’s zettelkasten (and those of the vast majority of people who came before him) were used for writing. I mention this because that fact gives us insight into why we convert reference note material into zettels. It also tells us why both your “Bicycle Laws” and “Bicycle Road Rules” notes might feel like extra work and/not very useful: They’re not written in your own words.

The reason we make single-idea zettels off of interesting points captured in a reference note is because we assume we will use these zettels to build up arguments and idea-threads to be used as the basis for essays and books. Luhmann didn’t just capture information. In fact, information was the least of what he captured. His zettels consisted of his own ideas about the information he captured. And, not only that, the zettels he created were done so with an eye toward other ideas he had in his zettelkasten. What you have are two notes filled with information. But, you haven’t translated that information into anything.

@bobdoto is right. I would add/clarify, though, that there can be totally valid reasons to store such informational notes in your vault. You just probably won’t want or need to work with them in the same way as conceptual/idea notes.