There was an ongoing thread here regarding macOS kernel panics. I wanted to open a dedicated bug report thread, but if any mods could merge them to preserve the details, that would be great!

The first two kernel panics occurred during normal usage. One occurred when editing a single text file (typing). The other occurred in a split-screen with a simple text file in one pane and a large PDF (using the new PDF viewer from 0.10.8) in the other.

The 3rd kernel panic occurred while Obsidian was sitting in the background (Safari was the primary application). The note that was open was a basic file with a YAML header and internal links only.

Kernel panics are not expected during normal usage.

Kernel panic occurs, resulting in a hard restart of device.

I do utilize a number of 3rd party plugins and the Minimal theme (in case other folks may see potential overlap):

For the core plugins, I am utilizing everything (including Sync and Publish) except Markdown importer, Zettelkasten prefixer, slides, and the audio recorder.

I’ll begin the process of narrowing down to only the core features.

The vault has been using Obsidian Sync + iCloud Drive + Git-LFS (GitHub), but haven’t had any problems with the setup previously.

1 Like
MacOS crash ( kernel panic )
MacOS Crashing - What Information is Needed?
Obsidian Renderer Crashes Mac and Cause reboot with embedded query v2
[MacOS]: Obsidian does not save and get stuck in a limbo state (failed to save - Timed out)
WhiteNoise January 26, 2021, 7:11pm #2

Thanks for the report, bug:

I am not sure if you have an old installer version. You can grab a fresh copy of obsidian from the website. This will update electron too…

I’ve updated the above report to include the current installer version (0.10.7), but will also pull the latest installer to see if it’s a problem from an old Electron version. I’ve now moved to testing without any plugins and themes and will keep the post updated.

Hello there. Coming here to report that I had Kernel Panics caused due to Obsidian 3 times between yesterday and today. No 3rd party plugins or even sync being used here.

The problem seems to be with the renderer. From the KP log (I can provide more if needed):

Loving it so far, I’m about to get the Catalyst version. Cheers and hopes that this will be solved soon. KPs are no joke!

@gabegomes Send the bug report to Apple. It’s their problem.

I did, of course. But I am not sure it is only their problem, as the previous version of Obsidian did not cause these KPs…

Probably you had an older version of Electron with obsidian. This is between electron and obsidian. But if it reaches kernel panic status, I blame Apple more than Electron.

It seems that Electron Helper is causing kernel panics on OS X Catalina. I have experienced this problem repeatedly in my...

Some people think this might be a GPU driver issue. try running obsidian with --disable-gpu.

Again this is on apple’s court. There is really nothing we can do about it.

Thanks for the thorough replies! I’ll try your suggestions and report back if I still have KPs, just for keeping tabs.

@WhiteNoise on that github issue (which sadly is closed so I guess nobody’s looking at it…) alb3rtuk mentions he thinks it’s related to the paulmillr/chokidar file watching library. Does Obsidian use this module? might help narrow it down…

It’s closed because the electron dev think it’s apple’s problem. we don’t use chokidar and even if we did, it should not cause kernel panics. Please submit your crash reports to apple.

I still got Kernel panic today.

I also encounter a crash at least once a day when I use Obsidian, even sometimes while the mac is idle.
It never happens when Obsidian is closed even if using other electron apps like VSCode.

I have never experienced a kernel panic from Obsidian on either my 2015 MacBook Pro or my 2020 Mac Mini (non-M1). I’m almost always on an external display but I’ve used the MacBook Pro’s display, too.

In past 3 weeks, my macOS crashed while using Obsidian. I have the CPU crash log and it was due to Obsidian Helper ( Renderer ) Thread.
I have never seen user space app to send a kernel panic. it’s rare. Please try to fix it guys.
Even after restart my Keyboard and mouse are not working properly.
Does anyone have the same issue ? 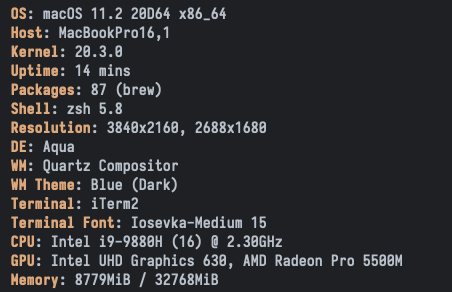