Is it possible to tag a block?

When taking daily notes, I tag important lines so that I can query them later (under construction :))

It will (hopefully) work fine for single lines such as the example above, but I would like to extend that to multiline text, something like

The idea would be to have everything between #work -- and -- (this is just an invented way to do that - anything will be fine) tagged with #work so that I can query the block the same way as single lines.

The ultimate goal being to have a page with everything #work related.

I am ready to jump into coding, just knowing whether

If I understand what you’re looking for, this is already possible in Obsidian.

A multiline text block takes up multiple lines visually, but it’s still one line from Obsidian’s point of view. You can add a tag to the end of it and Obsidian will treat the whole block the same way as a line.

Here’s an example using Obsidian’s built-in query feature. The “Report” page below has this as its source: 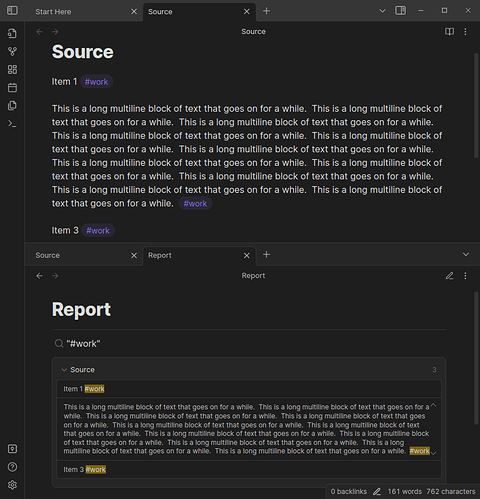 A multiline text block takes up multiple lines visually, but it’s still one line from Obsidian’s point of view.

Thank you for your answer. I think however that you are referring to a single line that warps:

I tried the second case and it seems not to work, unfortunately (only the actually tagged line is taken into account)

Yes, you’re right: my suggestion applies to long wrapped single lines, not blocks that contain newlines. In both of the other cases, the tag would only be associated with the line on which it appeared. Thanks for the clarification.

Since you’re querying individual lines of your daily notes, and you’re mixing lines that have different contexts, you have to tag each line with the contexts in which you want to see it. In particular, you would need to append #work to each line that you want to see when querying for work lines.