every code variation I could think of

I have a very long list of people notes and a dataview table lists them alphabetically, which is great. But it would be nice to group them by occupation and then alphabetically under that. Not sure why it’s not working but here are some of the parameters of my people notes:

This is my current version of the code:

This is what my result looks like (occupation is in there 2x, there’s a blank line at the top, and there are no results in any of the other columns.

There’s a lot going on here, and mastering it will require you to learn some of the ways in which Dataview works differently than a traditional database. In particular, it’s worth studying how GROUP BY and FLATTEN work. The docs provide some help, and there are some good posts on the forum that go into detail.

For the following examples I used the same input data:

We can visualize this data with a simple table:

One complication is that we have a field, Occupation, that can contain an array of values. It would be nice to be able to query the rows with the occupations split out so they’re easier to group. For this we can use FLATTEN.

FLATTEN is a way to create new columns based on existing ones. A key detail is that if the column being flattened is an array, then Dataview will create a new row for each value of the array. In this example, since a person can have more than one occupation, this creates a new row for each person’s occupation.

Now it’s easier to group the rows by occupation, using the GROUP BY command.

However, unlike in regular relational SQL, GROUP BY does not change the layout of the table, but instead replaces the results with a new set of rows, one for each value of the group, each of which contains a single field, “rows”, which is an array of all the original rows in that group.

This works, but may not be quite what we’re looking for, and comes with some other complications with regards to sorting each column.

One approach is to not use GROUP BY, but just to put the field in the first column and sort by it:

The approach I usually use is to use a LIST instead of a TABLE, which organizes the data as an outline: 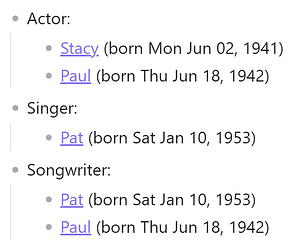 I hope this is helpful as a starting point. Good luck!

Amazing, I didn’t know about FLATTEN and was asking about that functionality in another post. I’ll have to play around with this and post back if something isn’t working. Thanks so much for your time, effort, and clarity!

I tried a few things w/ a different scenario and maybe I’m running into something too complex for this, or maybe you know how if it can be done. I’m using inline tags to pull in quotes from various documents from various people. The thing is, when there’s more than one quote in a note, my dataview displays both quotes in the same column—which is hard to read.

So when I read about FLATTEN, I thought bingo, that could separate the quotes into their own rows. But then I have two sources too, and every combination I tried doesn’t really give me the result I want, which is separate rows for each quote and then sorting by the source in alphabetical order. Here is one code option:

But that gives me this result—I now have separate sources, but now each source has both quotes in the row. 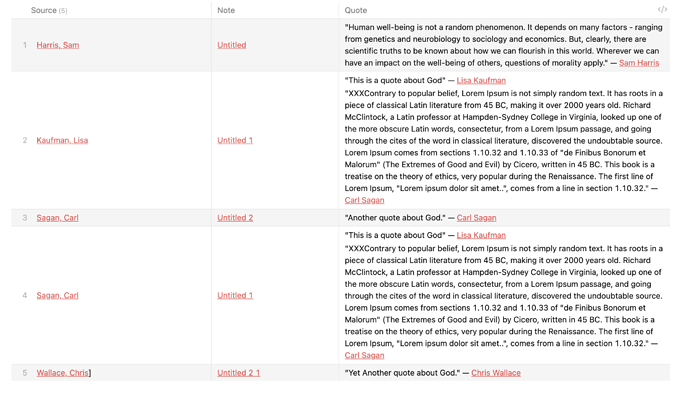 If I try this code:

I get an opposite problem-quotes are separated, but each has two sources:

I tried various other options based on your post, but couldn’t get it to work. Anything with GROUP by, resulted in empty fields and “row.” didn’t work.

What happens if you flatten both fields?

I feel like I tried that and didn’t work, but now it does!!! maybe I typed something wrong. Now this is exciting.

I will see if I can play w/ grouping now, but this, sorted by source is a really cool way to aggregate quotes or facts from across my database by topic(s). Much appreciated! 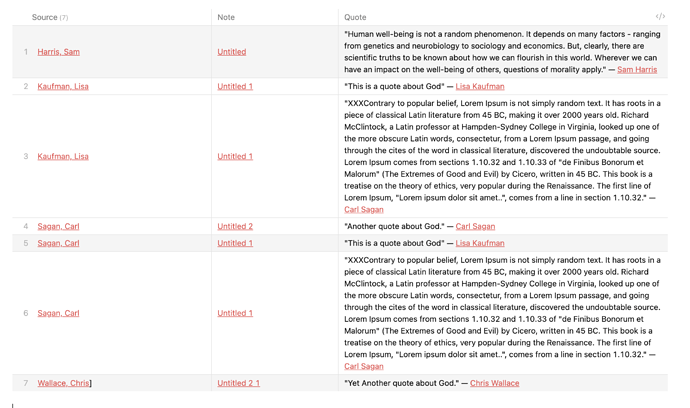 Group by Source and Note give empty results for some reason. (see screeshot depicting both options)… Is there a way to group when doing this?

Yes, however – remember that GROUP BY replaces the results with new rows. Each row of the group has a a field called rows that’s an array of original matching rows.

The reason your columns are empty is because GROUP BY replaced them; they’re now sub-columns (so to speak) within the new rows column.

To access the “sub-columns”, preface the field you want with rows..

It’s a bit confusing, but starting to understand. I’ll have to study up on this.
That said, the code you wrote gives back a parsing error. Tried adding rows.Source and Putting Notes in quotes: FLATTEN link(file.link, Title) AS “Note” and a few other things, but couldn’t get it to work. This is what I get back from the original code you posted:

Thanks so much for all your time and attention.

Hey there and sorry for so many questions, but I made what I think is an identical setup to what we did before and that dataview page is great, but then I tried something on a new document where I’m both quoting from someone writing an article (see screenshots)… I’m taking full quotes of a whole block and also snippets where I find a term of art that i want to keep track of. The results are returning double listings or double author and I cant for the life of me figure out why. If I have “Source::” twice this happens, but I have that in the documents we did yesterday. Even if I change one of the sources to “XXX” it lists both. 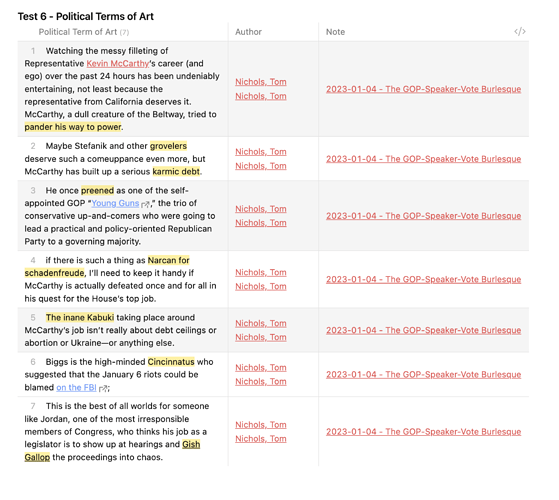 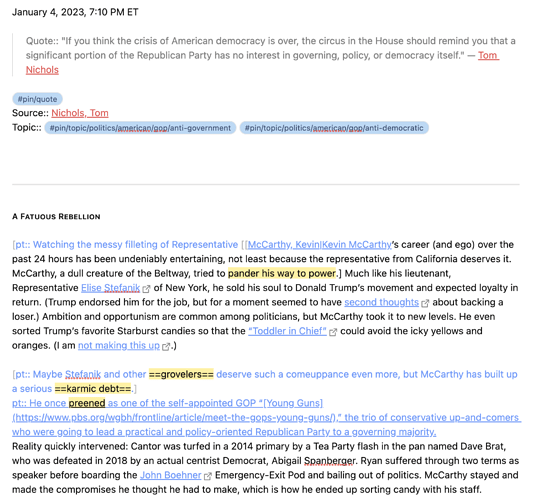 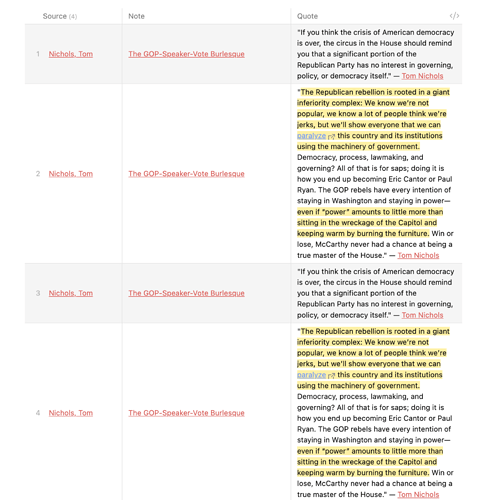 p.s. dont mean to offend anyone politically, this is all just research and testing.

There’s a lot going on here, and …

What a fantastically useful post. Thanks for all the explanations.

Now these results are giving me doubles as well, so something went awry… the original documents for the god quotes are the same. pulling hair out.

It looks like there’s a space between rows. and Quote, which is throwing off the parser.

Good eye!! That fixed the parsing error, but now getting no results in the table.
Something’s gone awry as what was working yesterday is now showing double results and the new tests I did today also show double. I’m gonna try to start over in a new folder w/ new tags and see if I can figure out what’s wrong. Any ideas?

Thanks for posting your work. I have to admit I’m getting lost in the details!

For debugging, it would be helpful if you could narrow down the number of files so we can see what’s going on. Could you perhaps post two short source pages along with a Dataview query that shows the double values from those pages? That would help a lot in debugging the issue.

Sure!! Do you mean upload 2 text files or copy/paste?

It would be helpful to me if you could copy/paste the source here of the shortest pages that show the problem, along with the Dataview query that’s not working right.

In my field we call that the Minimum Reproducable Example.

great! thanks! So this first post is the problem we solved yesterday… I simplified it to one note with two quotes on it, and two dataview snippets, one with and one w/o the grouping. I’ll work on the thing from today to simplify it and post it in a bit.

Here is the note:

And here are the dataview snippets

No Grouping - Duplicate Entries for any note with 2 Quotes.

I simplified it to one note with two quotes on it, and two dataview snippets,

As long as you don’t use lists/task, these two quotes will be within the page enclosure, and the fields you set will be associated with the page, making both Kaufman and Sagan the source of either quote.

Sure, we can split/flatten/… them, but your base data is just wrong. You’ll never be able to associate one of those sources with just one quote, unless you change your markup.

One way to do that would be to utilise lists, maybe something like

And if you removed some of the styling related to inline fields, it could look like:

Summary: As long as you don’t use lists (or tasks), your fields stays connected to the page, and not the various quotes, using lists makes your life a whole lot easier, as you can then use one simple FLATTEN and treat each quote individually. And these can be styled a multitude of ways, to make them look nicer.

Here is my 2nd example with inline pull quotes. Most articles where I tag “Terms of Art” are usually by the author of the article—In this example, Tom Nichols—so I dont want to have to put “Source::” under every block, as there can me many. In any case, when “Source::” is in the same document twice, the results get skewed. There might also be times when a “Term of Art” happens to be from a different person.

Additionally, there might also be full quotes I want to pull from the article by the same author, and sometimes quotes by others. But again, when there is more than one “Source::”, dataview gets confused. Even if the source for the bottom quote is also Tom Nichols, just having “Source::” twice makes the author duplicate in the dataview results.

This is the main note:

And here are my two dataview snippets:

Political Terms of Art - In this example, they should be only from Tom Nichols who wrote the article.

Quotes - These should be from the correct respective reference.