I’d love for the file explorer to allow custom sort of the folders. Reading the description of this feature request thread, it looks like he is talking about the files - not the folders. But I saw re-directs to this feature request where people had created some topics that were related to this one so I’m mentioning it here. I know I’m not the only one who wants to be able to decide the order of files in a custom way (via drag and drop) rather than like alphanumeric etc. because currently I end up with less frequent folders at the top and important ones in the bottom etc. I want to be able to arrange them. I’ve seen people name their folders with a numerical prefix in order to achieve custom control over sort order of folders. Firstly, that’s an unsightly kludge and secondly - if I change my mind later, to resort the folder I have to rename it (say from ‘03-templates’ to ‘06-templates’) which will mess with what some of my extensions are looking for. There is also a plugin that uses a file to be manually configured to achieve custom sort order (Custom File Explorer sorting) but it has a peculiar conflict with another plugin, so I disabled it (also trying to figure out how to contact the plugin’s author - haven’t found out how yet). Anyway - I would LOVE this feature. VERY MUCH! thanks

Either via private direct messages on forum (I’ve contacted you that way) or in the thread on the forum here, or maybe you can create a new issue in github (Issues · SebastianMC/obsidian-custom-sort · GitHub), whatever is most convenient to you.

@NothingIsLost i LOVE you mate! thanks a lot !

I can’t get drag and drop re-ordering to work with Bartender at all. 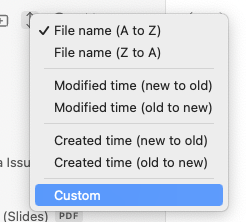 Now you see “a hamburger” right to the “Up-Down Arrow”. Click it to lighlight it like in the picture:

Click and Move any file in the folder view to move position inside the same folder. This position is persisted.

Still care about this heading into 2023.

Seeing as Obsidian functions as a form of mental map (hashes, tags, etc.), I think it is reasonable to expect that users may wish to also arrange files and folders in custom lists, corresponding to their own internal mental map of file and idea relations, just as someone would arrange papers or notes on their physical desk, or books in their study.

Currently, there is not even a somewhat vetted[sic] plugin for the addition of this functionality in the Community Plugins list (insofar as I have been able to discover, that is).

Yes, I have used Bartender (after reviewing the code myself), though users must have to do this personally, followed by manual installation or via BRAT, all the while being fully cognizant of the dangers of running plugins with Obsidian’s security[sic] model. Expecting users to, for example, flatseal Obsidian, followed by installing not only a community plugin, but rather a beta plugin outside of the Community Plugins list, with the goal of merely arranging files in a drag and drop manner, seems, quite frankly, more than a tad ridiculous. Though I recognize the current userbase of Obsidian comprises power users, this seems excessive (notwithstanding that power users is not a subset of programmers).

Take any major file editor, from Sublime to Notepad++, and you are able to drag the order of files and topics as you see fit (which will persist when you reopen the app). Even within Notion, you can drag and reorder your files manually.

It makes me curious, is there a strange backend issue preventing this functionality from being implemented in the mainline distribution?

Mind you, this is by no means intended as a criticism or indictment, but rather as a puzzling thing that I have encountered and do not fully understand. I appreciate all the hard work the devs, community, plugin developers, et al. have put into this project thusfar. Apologies if the rationale has been stated elsewhere, and my search capabilities have failed me.

Addendum (as post edits apparently are not possible after the elapse of 10 minutes): A workaround that I recently discovered earlier in this thread does indeed work, namely: Starred files can be manually rearranged. Thus, the ability to rearrange within the window for Unstarred notes appears as though it should be trivial to implement.

Regardless, in the interim, a workaround for those wishing to rearrange files manually without resorting to using plugins, is to simply Star all of your files. You may then rearrange them and access them through the Star sidepanel. The custom manual order persists between re-instantiations.

Note that this does not work for folders, as they cannot be Starred.

Really need this feature, as I did in OneNote

I recently discovered a plugin called MAKE.md that offers custom sorting of files and folders, as well as other features. It includes a “Spaces” function which might enable users to get rid of extra vaults, if they are using any, and do all their work within one vault while still maintaining the separation between separate groups of folders and notes. I’ve only experimented with it for a few minutes so far, but it looks very promising!

Wow, almost 3 years and this fundamental feature is still not implemented. I discovered this severe lack of feature after 5 minutes of testing. Did not expect it after reading so much praise about this application. Also non of Youtube videos that lead me to Obsidian mentioned this problem.

It is pretty funny that the topics on the Obsidian help page are sorted alphabetically, and starts with “Advanced Topics”. It seems like the developers of this application do not appreciate the concept of putting things in a logical order. Maybe that is the main issue.

(First, I voted for this too. I think it’s an essential idea. I’m not disagreeing that this is a valuable idea.)

It seems like the developers of this application do not appreciate the concept of putting things in a logical order.

That’s a fair point that it is ironic that Advanced Topics shows up first. But it’s uncharitable to say that’s not logical. There are many different uses of Obsidian. One of the main ways is as a non-linear network of notes, graph-style and wiki-style. It isn’t designed to impose linear structure. Though there are plugins that help with that, as mentioned above.

So you’re hardly lacking in options.

No disrespect meant, but these options, for me, range from not useful to completely useless. Sooner or later, in my humble opinion, Obsidian has to address this lack of sorting request with a Core Plugin and not some Rube Goldberg monstrosity of a Community plugin.

I relatively simple way they could implement this, for people that feel they want it, is to have an option in the settings. When enabled it should work like this:

This way the files and folder are in the sorted order even in the actual file system, and syncing with git or the official sync should propagate the sort order without problem. And no additional meta data needs to be saved or synced.

Maybe a plugin can implement this method, I don’t know.