We have already seen how, when a user uses iOS Files to open an .md file stored in a sub-folder of “Obsidian”, Obsidian opens - but it does not actually show the file.

You have previously said that, by design, it is not Obsidian’s objective to allow opening of Markdown files but, rather to function for the management of a self-contained vault.

That is a design choice. However, the app opening and doing nothing is sub-optimal experience - it is a dead end.

While it is eminently possible to “Share” a file to an alternative app, it takes longer.

Further, while the files can be “Shared” with Obsidian, this, again, does not result in them being opened. In this instance, Obsidian pops up with an “Import” suggestion - but the file is already in the vault.

You have previously said: “Obsidian does not set itself as the default markdown reader anywahere.” I am unclear, therefore, how iOS determines which app to use. Perhaps the logic is…

Regardless, I think something could be improved…

Thanks for posting this! I moved it to the Mobile category and added “[Feature]” to the title in accordance with the devs’ preference.

I think when you open a file in an app’s folder, Files opens it in the app instead of the usual default because those files “belong” to the app. If so, Obsidian should open those files.

I suspect there isn’t a way for Obsidian to release its hold on files in its own folder, tho I’d love to be wrong about that since I don’t expect the devs to prioritize making it work in (what seems to be) the expected way.

When Obsidian receives a “Shared” .md file, “Import” is not a required prompt for a file that is already in the vault.

It would be great if Obsidian recognized when a file shared to it is from its own folder and opens it instead of asking to import it. I imagine it would be relatively easy to implement, too, if iOS provides it with that info (if it doesn’t … le sigh). I proceeded with an import out of curiosity and it creates a numbered duplicate (as it does in other duplicate-name circumstances), which is bad.

Here is another behaviour pattern I just noticed.

This seems like a way to circumvent the hold that Obsidian has on files within its app folder. 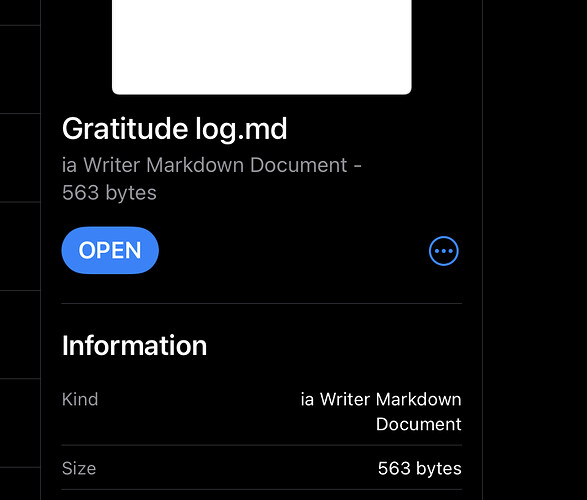 … Obsidian opens (but without truly opening the file) - as described earlier.

3 . The file type description is “iA Writer Markdown Document”. I do not have iA Writer installed. Weird.