Evergreen notes are either STRONG OPINIONS or STRONG FACTS, nothing else

Most evergreen notes should be statements with a strong opinions. That’s because it forces you to really think about what you’re trying to say.

That said, those Fact-based evergreen notes should then spawn ideas of your own that have strong opinions. For example: 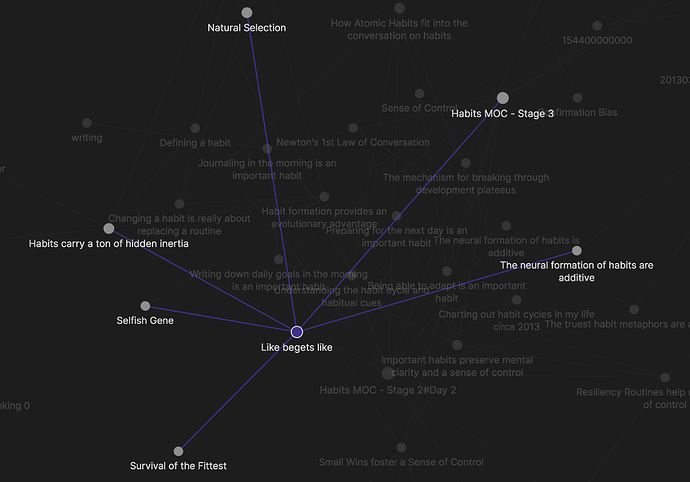 This is my strong opinion, weakly held. (Thanks for bringing that quote to my attention @ryanjamurphy ).

What is your opinion?

22 Likes
Evergreen notes for broad concept
[[Linking Your Thinking]] Resources
Your favourite fonts choice and why? thread
Klaas September 26, 2020, 6:46am #2

I am not arguing with what constitutes an Evergreen note. I would just like to point out a caveat about the word “opinion”.

In every day conversation the word “opinion” ranges from

“I’m entitled to my opinion” often becomes shorthand for “I can say whatever I like”. And this attitude feeds into the false equivalence between experts and non-experts (i.e. between evidence and “bulldust”) that is an increasingly pernicious feature of our public discourse.

In other words, only category 3 constitutes real “opinion”, whereas categories 2 and 3 constitute belief or views.

Now, in one’s own personal notes it goes without saying that one can express whatever one likes as whatever one likes. Nevertheless, in my view (which is not an opinion) one should exercise caution because notes can, and often are, used in public discourse too. whether that be in speech or in writing.

If one has been, let’s relaxed about the terms, it is easy to present beliefs/views as opinion. Not many people may notice it, but when one gets challenged it could be a bit, shall we say, awkward.

Incidentally, this comment is based on some of my notes.

“I’m entitled to my opinion” often becomes shorthand for “I can say whatever I like”. And this attitude feeds into the false equivalence between experts and non-experts (i.e. between evidence and “bulldust”) that is an increasingly pernicious feature of our public discourse.

I completely agree with that - yet, I am not sure if the underlying problem is really about the sort of linguistic differentiation like the one you proposed.

Maybe it’s a matter of how the above-mentioned terms or concepts are used and implicitly understood in different languages - I don’t know where you are from, but from a German perspective I would even argue that “opinion” is the weakest term as compared to its alternatives.

The term “view”, I think, is a much stronger one as it directs our attention to an important challenge which becomes even more clear when we think of its more precise synonyms like point of view or standpoint: I adhere to a certain interpretation of whatever (political, religious, social, …) problem because I stand at a certain point: this is a geographical metaphor that makes clear that I see things from a different angle because I am looking at them from a different location than my counterpart. In order to enter public discourse, it is essential to explicitly illustrate from where exactly one is looking at the problem in question. This means, any kind of discourse only becomes possible at all when we make clear where we come from (both to ourselves and to our counterparts). I can be of a certain opinion (sic!) because of personal experience or because I concerned myself with scientific/fact-based evidence or because of selfish interests (or maybe even altruistic interests).

When I enter into communication and my background of arguing is personal experience, then I should be aware of that - which means that I simultaneously become aware that the experience of others (that is, their “standpoint”) most probably differs from mine; only then can I learn to acknowledge other “opinions”. In the end, the resulting discourse is no longer about differing opinions, but about differing experiences. Same is true for the category of “interest”.

If my background, however, might be scientific evidence, here again the resulting discourse finally should become not one about our differing opinions but one about possible ways to solve an underlying problem.

In the end, you can call it “taste”, “preference”, “view” or “opinion” - I think that doesn’t really matter. What matters is rather the fact that all of them build on a specific background (experience, knowledge, interest, etc.) and only when specifying these backgrounds discourse becomes possible in the first place. In contrast, discourse is not possible when we just articulate an opinion while at the same time not basing it on a “because …”. This is what is meant by “arguing” - without arguments there is nothing to exchange. What I am trying to say is: the problem, in my view, is not that public discourse is somehow contaminated in many regards (and yes, it is!) but that, very often, there actually is no discourse at all. And this, perhaps, might be because the word “opinion” is all too often interpreted against the background of the term “freedom of opinion” - where “freedom” is often misinterpreted as the right to “say whatever I want” without having to justify anything.

People working with obsidian or any other similar app or approach are doing exactly this: we interconnect different experiences, arguments, facts etc. and, based on that, we develop our views (or opinions) and write them down. But in today’s public “discourse” the problem, I think, is not as you say that many people “present views as opinions” but that many people are not aware anymore that an opinion should be presented as a “view(point)” in order to make real communication possible…

Maybe this (philosophical) discussion is senseless and maybe it even doesn’t differ from what you were trying to say… But your comment provoked a couple of thoughts in my mind I wanted to share. As I am currently working as a teacher for politics and ethics, I am on a daily basis confronted with the problem that what we really unlearned is maybe rather how to “argue” - if I am giving my 16 year old pupils a task like “Discuss the following statement”, many of them just reply with “I agree because xyz” (xyz = the literal repetition of the statement they actually were prompted to discuss…

@alltagsverstand: thanks for your reply.

You raise some interesting points, but in the end it does not matter what something is called, as long as it expresses the right concept.

The concept you do not address is the educated, expert aspect. What I said is that “opinion” inherently expresses that concept, that what is expressed is based on data, facts, and expert analysis. By definition, therefore, it is free of bias, in principle (more on that below).

“View” expresses something that is personal, a belief, like e.g. politics, religion, and so on. Or even something as basic as colour: e.g. “red is more beautiful than green”.

A “view” or “belief” cannot be scientifically discussed, precisely because it is personal. An “opinion”, on the other hand, can be discussed scientifically, can be refuted, can be improved.

The way people use “view” and “opinion” interchangeably, and increasingly so thanks to mass communication systems, not only shows a certain ignorance, but also a certain arrogance when they present their “view” as if it is fact.

Last but not least, I am also aware of the fact that an “opinion”, although fact-based, can also, and often does, encapsulate the expert’s interpretation of the facts and analysis. It can therefore be prejudiced. Nevertheless, despite the prejudice, it is still possible to discuss the validity of facts and analysis, or the interpretation. That is not possible with a “view”/“belief” in the sense I have defined it.

In the end, you can call it “taste”, “preference”, “view” or “opinion” - I think that doesn’t really matter. What matters is rather the fact that all of them build on a specific background (experience, knowledge, interest, etc.) and only when specifying these backgrounds discourse becomes possible in the first place. In contrast, discourse is not possible when we just articulate an opinion while at the same time not basing it on a “because …”. This is what is meant by “arguing” - without arguments there is nothing to exchange.

thank you for sharing these thoughts about view(points), opinions, and the need to relearn how to argue - gave this non-academic much to think about. any recommendations for interesting resources to explore further?