Hi, I’m one of the Japanese translators.
I have a suggestion for a new feature to support non-English users.

We Japanese (or perhaps also Chinese I’ve found this problem is specific to Japanese IME) users have two steps to type command in Command palette. For Japanese users, before typing the Enter key, we have to type Hiragana and then convert them to Kanji or Katakana.(three character types exist!!)

For example, when I want to “create a new note”, I have to type the Japanese full command name that is virtually impossible for us or mostly just type “新規”, which means “new” or “newly”, and then find related commands.

Besides, if localized words are not consistent like “新しい”, “新しく” or “新たに” all of which means “new” or “newly”, we cannot easily find all of the related commands or just the desired command. So I’ve adjusted command names recently to be easily searchable for Japanese users.

But I’ve noticed it would be better if we additionally could type English original commands. If I try to find a command to create something “new” like note, file, or pane, it’s better that I could type just “new” that doesn’t require me to convert any characters and I can quickly find the related commands. and I think this option will make non-English users less confused to type commands named by translation mistakes or inconsistent choice of localized words. English command names involving words like “new”, “note” or “file” are more consistently searchable and findable over all commands than localized commands. 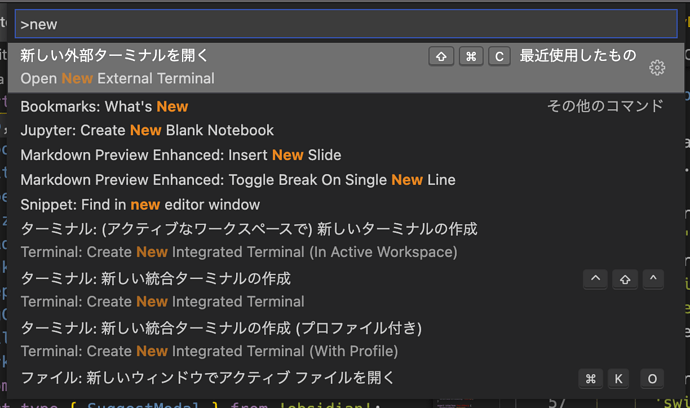 Same need for me (Chinese user), do you get any solution yet?