I’m using the really helpful Sortable Plugin, so columns in my tables can be easily sorted in preview mode. It it in its early stages, but already quite practical to use.

Of course it won’t be able to sort columns with “odd” contents, like user-formatted dates, for instance.

I opened a feature request for this on Sortable’s GitHub page. Maybe you’d like to support it.

I’m looking to create a dataview table that I think can only be accomplished with Dataviewjs. 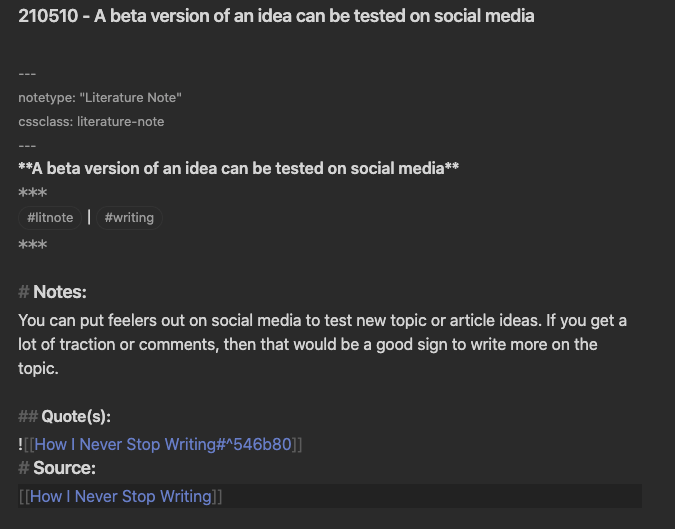 I would like to show ALL Literature Notes in a table sorted descending by their “secondary tag” frequency. The secondary tags are all tags that are not “#litnote”. In this example the only secondary tag is “#writing” but some notes have more.

This is so I can find clusters of “Literature Notes” that belong to the same tag. I am at a loss at the moment to figure out how to associate the tags with the notes. I can grab the tags themselves and the notes themselves in js, but not the correlation between the two.

I hope this is clear. Thank you in advance for any help.

@Azulaloi was looking for a dataview snippet that would give the word count of all pages in a vault with a specific tag. Uses the guts of the Better Word Count Plugin by @lukeleppan. Works really well with MetaEdit to change the search term. Here is what I came up with: dataviewjs.wordcountfromtag · GitHub

Thanks for this!, one question.

Where I can know more about those ‘inline metadata fields’? they look simple and amazing

Here’s another thread that shows how an idea evolves and DataviewJS is used: @FiekeB and I were talking about how a recipe data collection could be set up.

Build Recipe “database” in Obsidian *I usually write in Dutch, but for the sake of being able to ask help on the Obsidian Forum, this one’s in English. I will translate it into Dutch to keep in my vault under “Culinair”, once I know how to set this up according to my wishes. #remindertoself * Why I want to build this “database” of interlinked recipe and ingredient notes I have thousands of PDF Recipe books and also thousands of TXT recipes and lots of them in a recipe manager called Paprika. …

Sometimes I have large gaps between my Daily Notes, but still like the idea of having a “previous Daily Note / next Daily Note” navigator at the top.

Now this doesn’t work without actually traversing the file tree, and what’s better for that than DataviewJS?

I’m a little hesitant of putting such an amount of code into every Daily Note, so we might have to wait for common includes. Nevertheless, here is the code for those who wish to play around with it. It’s quite robust (doesn’t break when there is no previous/today’s/next note, and also works for notes with names different from YYYY-MM-DD).

It’s also great to use in a folder with weekly or monthly notes, because it “travels” through all files in “this” folder (and its subfolders) that have either

If no note with today’s date can be found, it’ll display a “date hint” in parentheses in the middle, plus the previous and next notes links (based on today’s date). The “date hint” is shown in the format set in the Daily Notes plugin’s settings, or ‘YYYY-MM-DD’ if the plugin is disabled or no date format has been set.

I’ve left in some commented-out other ways for displaying. You can of course also leave out today’s note in the middle.

Suggestions for optimizing the JS without breaking functionality welcome.

Hi - I’m trying to have dataviewjs show me any open Kanban tasks that are due today or overdue. It’s beyond my javascript abilities… does anyone have a suggestion on how to change this code to check for any incomplete tasks that are undated or are <= 2021-06-14 ?

Here’s a code block that finds any tasks which include a date of the form YYYY-MM-DD and are overdue (i.e. have a date earlier than now). Yes my code is verbose

Hi! Im trying to have a daview table in my meeting note with the last 3 meetings from the date of the meeting I’m taking notes…can anybody help me please…Thanks in advance

HI! really nice! im having hard times figuring out what to chance in here for tasks unscheduled and coming in the future…can you advice? Thanks!!!

Here you go. If you just want upcoming, then use the commented-out return statement instead

Hey, it may just be that I don’t have access to the repo but that link is giving me a 404. Any chance you have a better one?

Perfect! thanks so much!!!

Sorry. I moved some things around. Here is a new link: dataviewjs.wordCount · GitHub. Additionally, I made some large updates to the snippet so check out this new one: GitHub - torantine/obsidian-snippets

Looking for some help here. I currently have three types of notes:

Each excerpt has a dataview field called Topic that contains a link to a Topic note.

Each Topic note has a dataview field called Subject that contains a link to a Subject note.

Anyone have any idea how I can accomplish this? Thanks!

First question:
Where/how you create that links? Inline Fields or yaml frontmatter field?
If in YAML frontmatter, then these links works only as a value in one specific field; if in inline field, then these links working in two ways: associated to the field (as yaml) or as an “Implicit Field”, i.e., as a metadata that Obsidian capture as “Outlinks” or “Backlinks” (depends of the direction) and listed in right pane.
Depending on this, the queries can be build in different ways.

Thanks so much for responding!

The fields will be created to allow Dataview to be utilized. For example, I may make a note capturing a quote I read, which would look like the following:

So, I then want to be able to go to the faithAndWorks note and create a query that lists all the notes that have faithAndWorks in the primaryTopic field. This is easy enough, and I know how to do this.

Here is where I’m stuck at: On each primaryTopic note, I have a field called Subject that designates what the primaryTopic falls under. For example, the faithAndWorks note would have Christianity as its Subject.

Let me know if I’ve thoroughly confused you or not and I will try again!

Well, I’m not an expert in Dataview (and a ‘zero’ in DataviewJS).
Maybe an expert in dataviewjs can help you in better way than me.
I understand your ‘logic’ and make all sense. The solution would be more obvious (for me) if your system was build in reversed way: from Subject → Topics → Notes.
But I accepted your ‘challenge’ and forced me to think in reverse way (as your links system). After some gray matter consumed and some white smoke, I found one possibility:

I’m not sure about this but you can try.

Would you mind elaborating on the way that is more obvious to you (Subject—>Topics—>Notes)? Interested to get your thoughts on it, as your way may indeed make more sense and if so, I can then implement it in my vault

Well, I think maybe I expressed myself in a not very clear way (a problem for a portoghese trying to write in english). I said “the (dataview) solution would be more obvious” for me, not your system. Because I’m unable to play with dataviewjs, my restriction to simple queries implies a way of thinking with some limitations.
For dataview is more easy to call values in cascade (top-down)

Taking your example, it’s more easy to call a value in “Subject” file, then the others comes in sequence. From one file to multiple ones: Subject → Topics → Notes 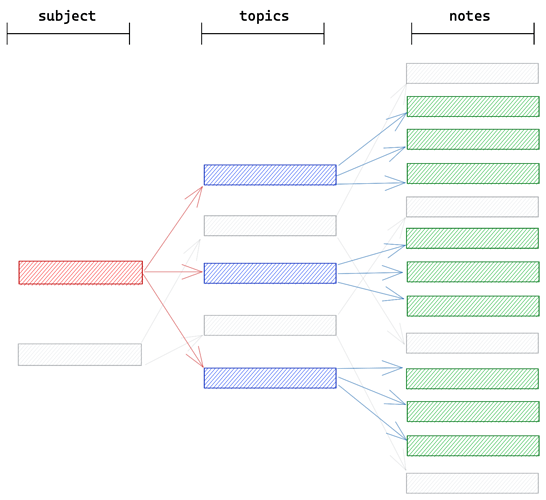 But your system take things more complicated to the query because it works in reverse way: Notes → Topics → Subject. (It’s easy to visualize the ‘problem’: in the query proposed in my last reply, the table follow the intended final order - subject / topics / notes - which is contrary to the links system implemented). With your links system it’s necessary to call in first place all the notes… but we don’t want all the notes. Then it’s necessary to filter these notes with a value in a field (“Subject”) that is not placed in these notes but in the next level (in the topics files). 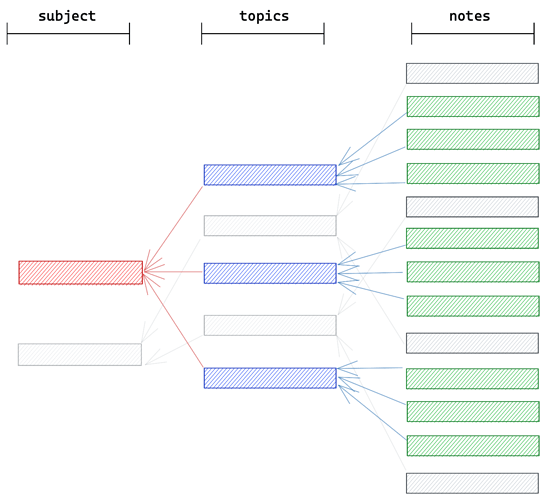 In conclusion: your system is fine but the tool (or me) has some limitations!