I’ve been using Obsidian for several months and have settled into a reasonably good workflow for notes, sources, etc. The Daily Note plugin in particular has been great for keeping track of what’s going on and doing quick capture that I know I won’t lose track of later, but there were two lingering things I didn’t like:

I’ve seen some examples of using text expansion scripts to create navigation links for Daily Notes, but this seemed a bit clunky to me, especially when trying to account for the logic when Daily Notes aren’t actually created every single day. Similarly, there are a few plugins that are supposed to support Todo migrations, but I’ve not gotten any of them to work so far.

Then recently I saw a YouTube video from Bryan Jenks about the Templater plugin, and when he showed macro expansions invoking arbitrary scripts I was pretty sure this was a workable solution. I’ve spent a few hours banging on some Python and have a couple of scripts that, when hooked into Templater macros embedded in my Daily Note template, do a few things:

I am in no way a skilled or probably even competent coder, but figured it wouldn’t hurt to share what I came up with in case it’s helpful to anyone else. Obviously most of the credit goes to Templater’s author for making such a powerful addition to an already great tool. At any rate, the scripts and some basic instructions are available here: 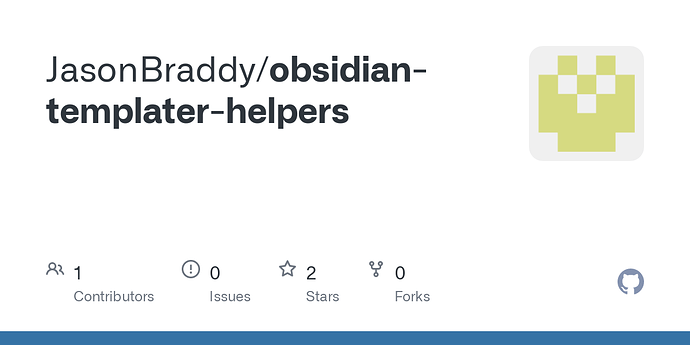 Contribute to JasonBraddy/obsidian-templater-helpers development by creating an account on GitHub.

Enjoy, and please let me know if you have ideas for improving on this concept!

EDIT (14 May): This broke with release 1.1.0 of Templater, but I have recently updated the scripts to work with the new syntax and fixed a race condition with the file modifications that was causing issues in some cases.

Nice. I have recently used the same idea to create a schedule depending on the weekday in my daily note template after @osgav pointed me to the Templater plugin.

Jason! This looks ideal to me, but I’ve no idea how to actually implement it. I muddle through obsidian as best I can but am committed to getting better. I do have templater, so would I just copy the obs_todo_migr.py as a note and put it in that folder? Sorry for my ignorance, but if you could give me any help I’d really appreciate it. Thank you so much!