Consistent moving of attachments when moving notes to different folder

For a while now I’ve been struggling with the fact that there is not a good method for moving attachments with notes. As a intermediately experiences PKMer things still move around a bit while trying something new.

I’m aware of the really well developed obsidian consistent attachments and links plugin. But to use that I have to forgo the smart linking feature of obsidian.

On the Discord channel @LauraSmith replied, “The problem with this as a feature request is that attachments don’t belong to a single note. They can conceivably be used in multiple notes (even if you aren’t doing that). Which makes what you’re asking for a little tricky.”

I wholly agree with her, but thought that this could be solved like this:
Obsidian show a dialogue if someone moves a note and it’s attachment(s) is (are) also used in another note:

I’m not a programmer but I’ve seen more difficult things being done by plugins.
Pointers to solutions that I might have missed are of course very welcome.

Maybe my idea could be combined in a plugin with this request:

I originally converted my Evernote notes using Yarle. Yarle puts all attachments in a folder _resources below the folder containing the note. After a few months of “digital gardening” the links between notes and attachments are in a mess. There have been two feature requests related to moving attachments with notes: Move attachments with notes Can moving between folders also move the attachement I am also aware of the Consistent attachments and links plugin All of these solutions have the p…

I think the only way is to use folder-note plugin. or somehow make a new plugin that works with a predefined hierarchy like breadcrumbs.

if you set your settings to store attachments with current not not a specific folder for all and you also bound a note and its folder to move together then when you create a attachment to a not it is stored beside it and whenever you move the note it move with its folder meaning all its attachments are going to move with the note because they are in its folder.

Remember that there is a Folder-Note folder plugin and there is Note-Folder or something, they were made in parallels but they are doing the same thing, they need some other miniplugs to work. For example am using “Folder Note” and “Folder Note Autorename”. and it works. you just need to read the short documentation, it is just that it was so long ago that i forgot the details

Thanks @Archie I read the manuals for these plugins but I find it too hacky. My folder and note structure would become a mess when viewed in other markdown apps. But I thank you kindly for suggesting these.

I’ll wait until some bright mind creates a smart ‘move attachments with note’ plugin for all storage scenarios. A feature like this should be a core feature I think but maybe that’s just me.
Hopefully a capable mind will feel the same need as me but and is also able to create it.

I agree that it is a very desirable feature and I am not completely happy with it, but long ago I think I decided to live with it and ignore it for now, you can also look in Dendron , witch have this feature at its core but is base on VS Code. I am too much invested in obsidian to switch anyway but it maybe different for you

The same counts for me, I’m also too much invested in Obsidian, it has an awesome array of very useful plugins. 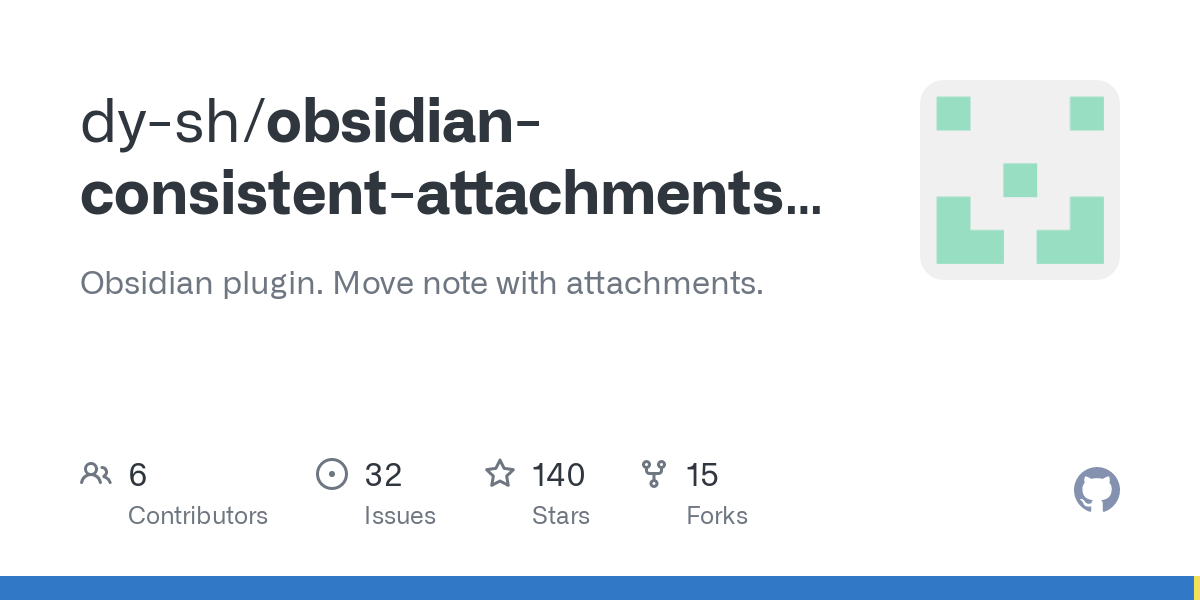 Obsidian plugin. Move note with attachments. Contribute to dy-sh/obsidian-consistent-attachments-and-links development by creating an account on GitHub.

Yes that plugin is mentioned in the very top post