I’ve been keeping plaintext lists for years, and have LOVED migrating everything to Obsidian! I’ve recently tried Dataview, and I’m sure I’m just scratching the surface. I’m particularly excited that it gives me a great way to keep a running list of the people I’ve met in various settings.

…in Drafts, then run an action to append it to my daily note in Obsidian for iOS. For a conference or meeting, I’ll have multiple “met::” entries in the note for that event.

Then, I’m using Dataview to consolidate all of those into a single list I can call up on my phone when I need to remember who I met the last time I was here.

That all works, but the formatting of the list isn’t very easy to scan (screenshots below).

Checked the forums, read through Dataview’s support pages. Tried all the (non-Javascript) options listed there. Tables don’t scale well on an iPhone, “WITHOUT ID” strips the filename and still has funny indentations on iOS.

Below are examples of what it currently looks like, and a mockup what I’m trying to achieve. 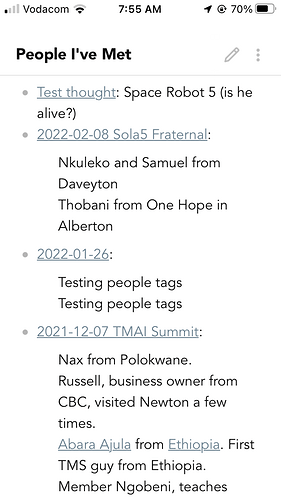 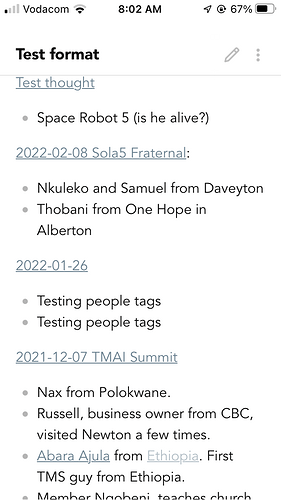 Not a proper DataView answer, but as a quick workaround you might prefer the formatting of an embedded search:

Or just run the search in the sidebar so you can manipulate the results more. You can make it occupy the whole screen if your theme hasn’t hidden that control.

Can you share the dataview code you’re using? It should be possible to add additional markdown to the list, or failing that, use DataviewJS which gives many more options. There might still be some oddities with formatting on iOS but it should look much closer to your mockup.

not sure why your subpoints doesn’t have bullets (i believe if u disable your theme, it might be there…). anyway, i think this css snippet might help your case (hope you know how to load css snippet (Add custom styles - Obsidian Help)

My code is pretty simple:

Thank you, this is very helpful! I hadn’t thought to disable the theme (Minimal), but that did bring back the bullets. I hadn’t used CSS snippets before, but figured it out. Your suggestion worked wonderfully, except all the text is now justified to the same point. (See screenshot). 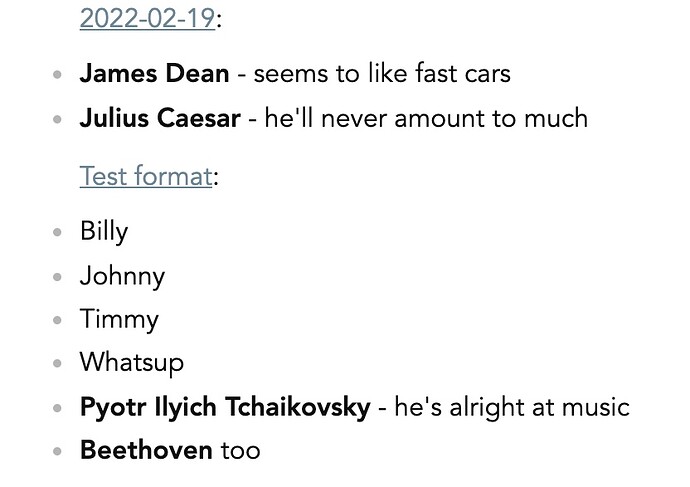 I tried some variations on your suggestions, such as…

…but my padding instructions don’t seem to do anything.

I had a go with dataview JS and think I’ve got something that works. My use case is of a log of music I’ve listened to, using a “listened::” line in my daily notes (which are in a folder called Journal)

I’ve chosen to sort them with the most recent date at the top, but you can change that.

Thanks for the original idea, this is really going to change how I use Obsidian.

This is phenomenal. Thank you so much for being so willing to help!

I did use the padding adjustment after all, since I ended up with a bigger left margin than I wanted. The only other funny thing is the following lines under a bullet point don’t follow first line indent…

I can live with that, though.

I’ll need to experiment a little further with the JS option, but I’m glad it’s been helpful for you too!

huh. i’ve to admit, i only recently experimenting with list-style-position. i guess that’s the side effect. try this snippet below instead. i quickly checked – it aligns the subsequent lines well.

you may adjust the “1.5rem” to your liking - i suggest “rem” unit as it will scale nicely between desktop and mobile (as opposed to “px”).

Thank you! That does exactly what I wanted.

I’m assumed this isn’t feasible, but might as well ask while the topic is still active. It isn’t possible to move a single line to its own bullet point, is it? 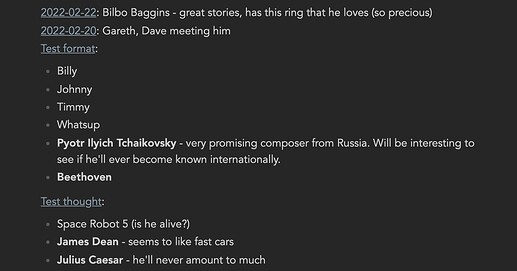 yeah. that’s #dataview matter. i don’t know if it’s doable to adjust from css perspective. but if u want to have it all as bullet u can use grouping. but that would make those with bullets indented further (not any better than what u have right now)

To get multiple values in a single line you can use join() function:

Interesting. I’ve tried playing with both of those settings but they each raise other issues.

The List rows.met command does give everything a bullet, but as @efemkay noted, subpoints in groups of 2+ get two indents and bullets. The sorting also seems to be alphabetical no matter what is specified.

The join() command by itself does put everything in a consistent format, but I’d really prefer the opposite for quick scanning of bulleted subpoints in parallel. I thought it might be possible to combine it with the rows.met command above, but couldn’t get it to work with my very limited coding knowledge.

I’m really grateful for each of you so willingly sharing the fruit of your experience.

Oh… I think I misread your main issue (this topic is long and I read only the last posts… my bad).
So, your main point now is: “I want all the outputs, single or multiple, as bullet point, i.e., as lists”.
Try this: 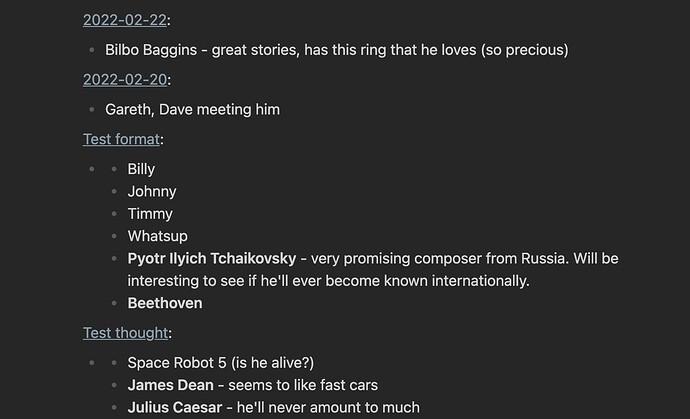 Well, I’m using the default behavior to Minimal. So, in my case I don’t have any bullet point and any indent. Because that I don’t preview this last behavior.

Generally I think the idea is the same (as in my last solution), but now it’s necessary to distinguish single values from multiple values:

For anyone just jumping in here, the solution is a combination of: the query from @mnvwvnm and the css snippet from @efemkay. 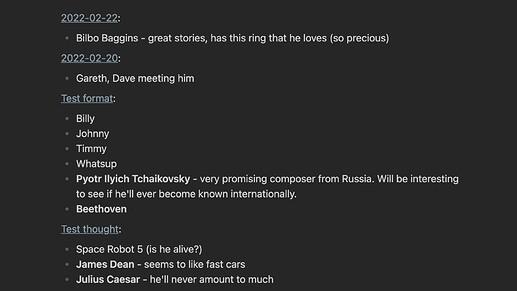 Thanks for all the help everyone!