I want to sticky specific notes or folders to the top of the tree.
In addition I want to colorize them.

Additionally enable the fold/unfold hotkeys for the tree as well.

Adding Color to Obsidian--- A Rainbow of Possibility! Feature requests

I’m sure this has been suggested before, but I still see no actual implementation of this, so I decided to compile a few concepts and work-around implementations in hopes that someone may find some interest in picking this up! [image] Finally this is a beautiful implementation by @Lithou using CSS which I think looks absolutely phenomenal and something that would really beautify (and streamline) knowledge managers around the world! [image] @brimwats probably can speak much more to the benef…

Sticky FOLDERS would be really useful. There seems to have been a request for this earlier, but it was folded into something about notes that doesn’t seem really related to me (Sticky folder needed). Starring folders would work, too, though it would add unnecessary steps to the workflow. As someone who just thought they lost half their notes because they were using an asterisk to pin the most important, accessed-every-day folders to the top, this seems an important feature. 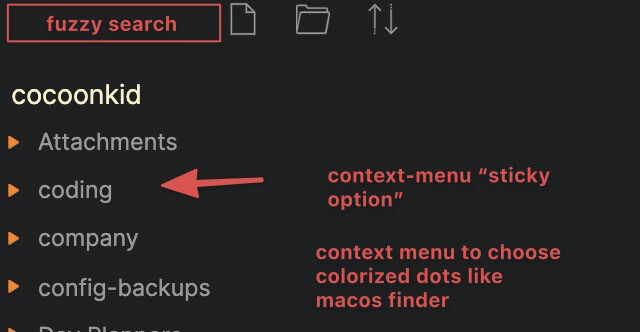 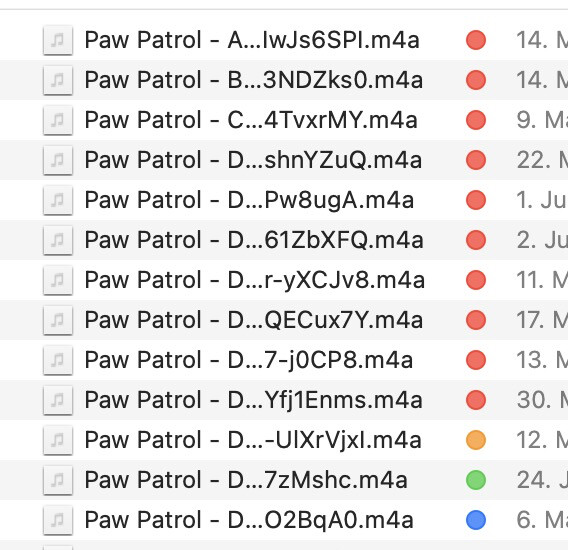 While I see this as being useful for organisation and having a good “on my radar” section at the top of the file list, I hope it is implemented with native tags support ie the colour tags chosen in Finder sync to Obsidian and vice versa. I wonder if it would be possible though with the other platforms Obsidian has to support. But something like that suddenly becomes too siloed if it doesn’t use standard OS level features and tries to reinvent the wheel. Perhaps a choice to select how Obsidian stores these based on the OS could be workaround and people who use mixed platforms will need to pick a favourite.

I am not sure, probably I haven’t been specific enough but I personally don’t need any sync of the color tags back and forth from the OS.

All I’d need is the ability to colorize and sticky notes/folders in obsidian tree itself.

That is a basic note taking need and it would be SOOO AMZING to have this as a plugin or even core feature.

All I’d need is the ability to colorize and sticky notes/folders in obsidian tree itself.

Yeah, I’m totally in agreement with your request here and would like to have the same. I just added some extra concerns to think about since some of those organisational abilities could be saved independent of the app already. Just like folders/files can be organised outside of Obsidian and it still works, colour tags seem like another feature which could work independently that way, at least on Mac and iOS.