This would be a useful feature.

+1 for this feature as core.

The folder-note add-on is not a bad workaround but doesn’t offer anywhere near the same functionality.

I would suggest more: Make it so that folders can double as notes. Ie. Contain text, be linked to, yet still act as folders. This is an outstanding feature of Notion. Although not strictly in the spirit of zettelkasten, it affords incredible flexibility for sorting and filing notes, so powerful.

I think it is important to remember that the intent of Obsidian is that you have your notes locally and they are in a form that is hoped to be future proof. What we have is a file system hierarchy of plain text notes. Obsidian provides a way to view/edit and add functionality/meaning to the plain text notes.

I think linking to folders Ia a common file system paradigm and I find it missing and should be supported. And the File Explorer should allow me to select a folder when I do a ctl-O. I thinl that the folder notes plugin is the right solution for doing more. In the file system you can create a note with the same name as a folder. The folder notes plugin adds a convention and GUI paradigm as to how to treat these notes.

Came here looking for this.

A link to a folder should expose the folder in the Explorer.

A year later, I’d still like to see this happen. A link to a folder could have a slightly different syntax, similar to ![[ for transclusions, but with another character in place of the exclamation point. Then the dropdown menu as you begin typing the name would show only folders, just as [[ and ![[ show only files.

with another character in place of the exclamation point

I’d prefer not to introduce yet more syntax. It’s getting hard to remember these Markdown syntax extensions.

How about if you wanted to autocomplete only on folder names you typed [[ and then / signaling to Obsidian you want only folders.

Well, for one thing the use of ! for transclusions creates a precedent for it. And your suggestion would also be adding another character, just after [[ instead of before, and would also be additional syntax to remember. And it would be less precedented than putting a character before the [[.

your suggestion would also be adding another character

Not quite the same. It’s a character that filters the search. It doesn’t show up in the end text. So someone who reads it wouldn’t have to interpret it.
Now, maybe you do want to make it clear in the link text that you’re pointing to a folder. in that case, you can follow Unix (or URL) convention and add a / to the end of the link text. So now, when you read it, it’s clear the link is to a folder. And note that the / character is the same. Much easier to remember.

I’d still find it more elegant if adding ! before [[ indicates a transclusion and adding a different character indicates a folder, and I don’t think it would be hard to remember at all.

I’d also prefer it because the syntax would make it clear up front that it’s a folder link, rather than burying an indicator at the end, where it would look like the easy-to-ignore slash at the end of a URL.

But I think we’ve both made our cases well enough for the devs to choose one of them—or another approach entirely—if they do decide to implement the feature.

I am looking for the same functionality. I havent found on as simple as an internal wikilink. However, I did install the Vantage plugin. It allows you to insert into a search based on more complex terms.

In doing do so the only term I entered was the path to a file and it inserted every file in that folder and all sub folders. 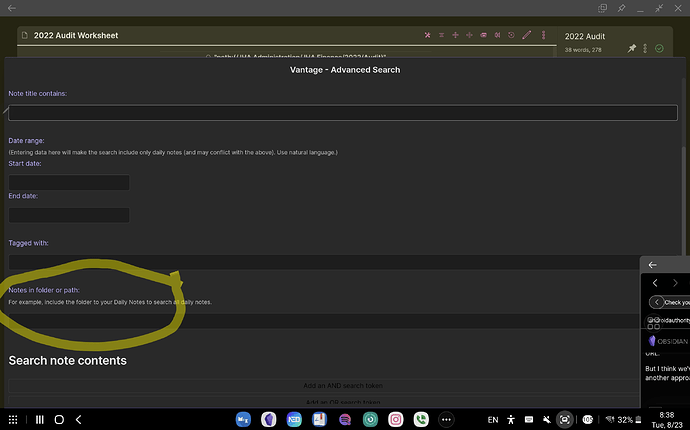 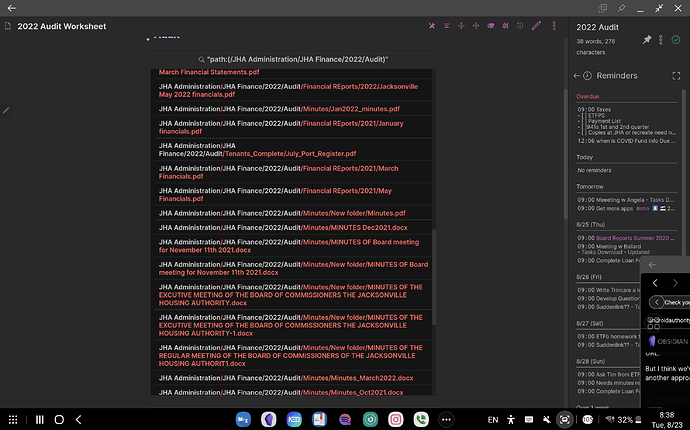 Not exactly what you or I were looking for but it gives me a workaround that will do for now.

I believe this fails if the path contains a space.

I think you can escape spaces in paths (\ ), but I haven’t tried it.

@miguelmarcos To deal with spaces in links (to folders or files), read posts in bug report: Space in link to file

It is pain when you have to deal with spaces and other characters in markdown links but it is usually possible to formulate working link. Sometimes at the cost of other properties as discussed in:

I also miss this feature in Obsidian.

When backlinking folder with ! formatting, the content of the folder should be shown as collection of files in backlink formatting. 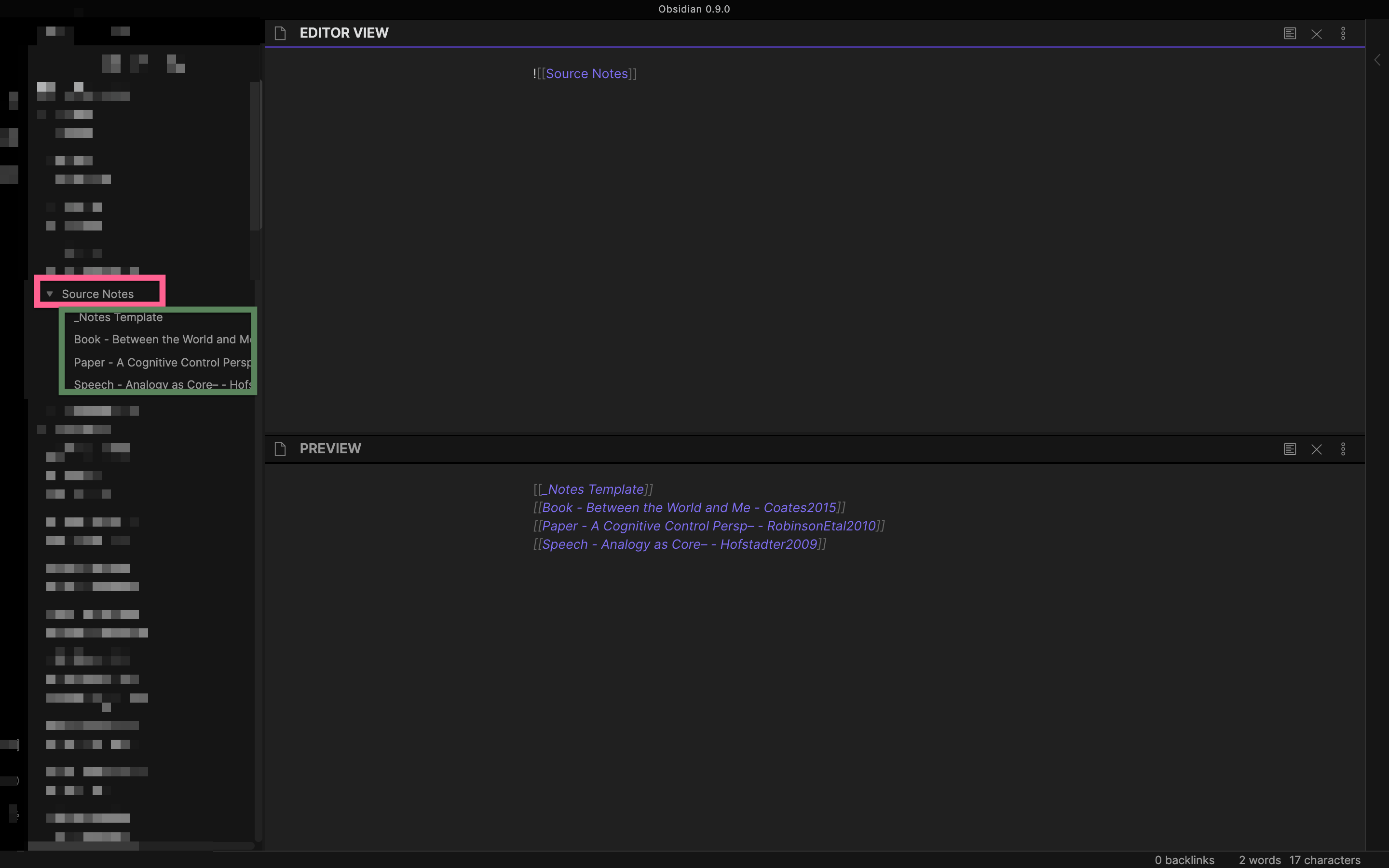 I don’t think this has been explicitly requested previously. Similar posts exist here and here, but I don’t think they’re the same as this request. I’ll try to make it simple: if a folder exists in the vault, you should be able to backlink to it—like [[Folder]]. This would make it easier to interlace folder-and-note setups for those of us using them. It’s also in line with how DEVONthink interprets [[wikilinks]]—not sure about other wikilink-supporting apps.

“links as first class citizens”, this will be really helpful

+1 from me. This’d open up all kinds of potential organizational methods that are currently very clunky to implement.

I imagine the ideal scenario would have two options, just like creating backlinks: