Adding 1-6 hashtags is not always convenient when there are a lot of headings in the text.
You can make hotkeys ctrl + 1-6 like Typora. 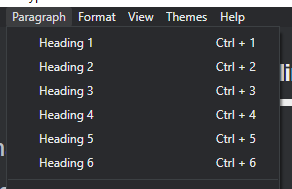 +1 yes please. Have hacked this with keypress automation and use it all the time, but it’s not very reliable - if there are hashes already present it just makes a mess.

This is already requested in: Shortcuts / hotkeys for headings

If you use Templater, you can create templates for each heading level and then assign hotkeys for each template.

I’m using decrease increase heading level in Smarter markdown hotkeys plugin.
Ctrl 2 to increase Ctrl 1 to decrease
and after ctrl 3 toggle list/todo list. etc.
I use wrap with shortcuts plugin too. But I want to do a plugin later with maybe menus with several entries by theme around this ctrl+number shortcuts.
For the moment I could do everything around ctrl+number and ctrl+shift+number
for instance on ctrl+shift+3 I have a todo list + tag todo to see it the plugin checklist.
so when I didn’t finish a paragraph in my notes, I add this to see it later.
I modified wrap with shortcuts plugin (directly the file.js in obsidian folder) removing all the trim() so I can add spaces between tags. I did this the second day I used obsidian and now I’m learning javascript css typescript to see if I can do something later around this.

@gantengx The locked thread claims to be solved by “shortcuts-extender” plugin. Does it work for you?

It does work as a workaround, personally I think this shortcut key should be a given (it’s built in for both Roam Research and Notion) rather than installing yet additional plugin

Not to mention that plugin gave me way too much extra hotkeys that I don’t really want, so had to discard so many extra hotkeys just so that I can get header hotkey is quite ridiculous

It seems that the shortcuts-extender plugin is not working in v1.0

Thanks, the decrease/increase heading level hotkeys are very useful.