The space between Quisque and rutrum should be collapsed.

The space between Quisque and rutrum is not collapsed and the line following the word-wrap begins with a space.

3-10 spaces following the inline code-block collapse as expected and the line following the word-wrap does not begin with a space.

No quantity of spaces effects preview at all.

Uhm, I think the bug is the opposite. 3-10 spaces after inline code-block should not be collapsed.
This is edit mode. You want to be able to see the spaces not have them disappear.

It’s not a matter of being collapsed or not. They should not be invisible.

It’s more a matter of where space should be put: upperline or in the lower line.

For consistency, they should all be in the upperline until they fit.

That makes sense, you’d want multiple spaces to be visible in edit mode. So ignore the additional notes.

I’d like to follow up on this - spaces are not currently left on the upper line until they fit. It seems that any formatting characters will cause the following space to stick to the wrapped word, even if there is plenty of space. 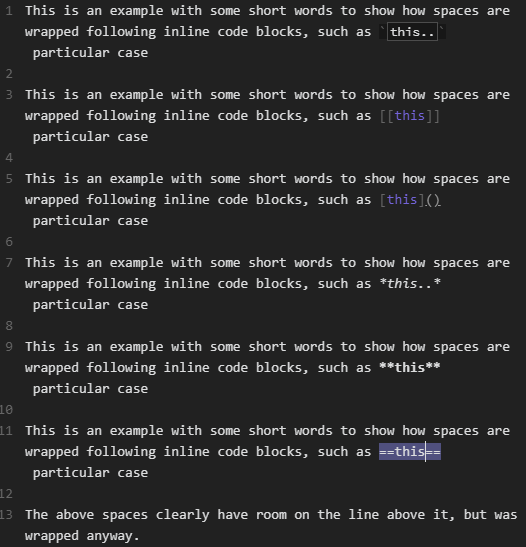 This issue is not present in the preview.

Using this css solves the problem. Not sure why codemirror uses another default. We’ll investigate this at some point.

So we figure out the bug. It depends on how chrome handles trailing whitespaces. It will be properly solved once we upgrade to electron 9 (which has a newer version of chrome).