This was previously mentioned here. When you have some footnote [^1] and try to reference this footnote multiple times in a document every reference after the first one gets automatically renamed to [1-n] in the preview. This is not only ugly and unintuitive but is also blatantly improper in an academic setting where [1-n] implies that you are citing everything between 1 and n.

Using footnotes to handle citations in this way was dismissed as a “hack” despite this being how citations are handled all over the web, I’d even go as far as to say that this footnote system is an imitation of the citation system seen all over the web.

Take for instance this Wikipedia page where you can see the same footnote citation being referenced multiple times without changing the identifier: 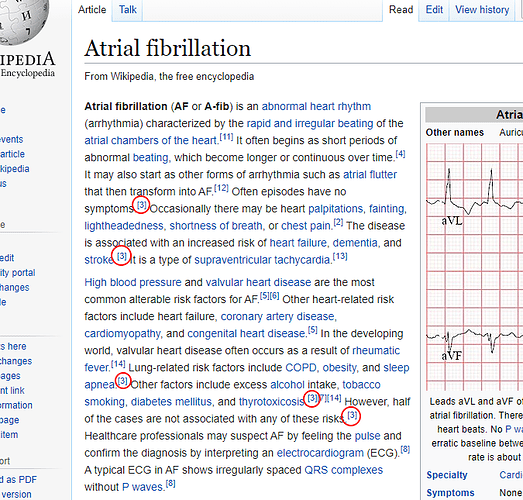 Or this scientific publication where you can see how a span of citations are abbreviated with the use of a hyphen:

To summarize, it was previously mentioned that footnotes in Obsidian behave in a rather quirky fashion that isn’t found elsewhere on the internet and that makes their usage improper in certain academic contexts and the response was that the expected usage is a hack and that a feature request should be made, so here I am making the feature request. For whatever reason that the [x-n] naming notation was adopted I wish that it were toggleable, even if that means losing the return links found embedded in the footnotes

I agree. Now that I’ve started to use Obsidian for writing and not just note taking, I would appreciate a fix or solution for this problem.