Vim support for the new editor (Codemirror 6) - Neovim, libvim, or something else

Consolidated discussion around alternative Vim Support, especially for the new editor CodeMirror 6 which does not have an emulation mode for vim.

Its possible to use real vim inside of app, instead of emulating it by key bindings. It works through connection to NeoVim.

It would be really useful to me to have real vim experience with all my vim plugins and stuff, than just a poor simulation.

You could just set Neovim as your default application for markdown files and then set a hotkey in Obsidian for Open in Default Application. The full vim experience is then only a keystroke away.

@sam.c the difference in this case is that Neovim is made to be embeddable, to give you an “engine” for applications to run vim keybindings. If this were implemented in Obsidian, this would make almost all “I wish vim keybindings could do X” would theoretically just “go away”, or at least be far easier to implement.

I’ll point to @aladmit’s same VSCode plugin at the very bottom of the page, where they go over how that plugin works, to show how it would be possible for Obsidian. IMO, this should probably be in “Feature Requests” and not in “Plugins Ideas”, as a way to completely replace the current Vim implementation with this.

I second this request. Neovim as a backend for vim keybindings would be far better than the current implementation.

I second this request. I think it may be impossible to use plugins/hotkeys and many other Onsidial features while in VIMR mode but, this still makes sense, especially if switching back and force will be as easy as toggling preview mode with Cmd/Ctrl+E . Main reason is being able to use keep the same screen layout without opening new windows as the external editor doesn’t know what part of the screen the current file occupies.

@macintacos when you say this should be a feature request rather than a plugin idea, do you know what kind of access to the codebase would be needed to implement this? For example, if this is gated on Obsidian devs not having bandwidth to implement this right now but also requires knowledge of the closed source, I wonder if there’s some sort of hypothetical API that this could be implemented against s.t. if this were developed like a plugin against that API they would be able to take that work and integrate it into Obsidian directly w/o having exposed their source (assuming they have bandwidth to review but not to author). I honestly don’t know if this is a viable route, but it seems maybe worth exploring?

Perhaps it’d work as a plug-in - I’m not sure if the editor that is currently being used by Obsidian could pass in Neovim as a backend, but I’m not experienced enough to know. I mostly am saying that it should be a feature request simply because if this could work, it should be the default Vim implementation instead of a plug-in that users need to seek out.

I forget what editor technology Obsidian uses, perhaps that has a way to make this easily doable?

I totally realize that it may be out of scope for obsidian, but I would love to see a more ‘native’ vim experience.

Though a heavy vim user, I never use vim modes in apps because I cannot bring along things like easymotion and leader commands which have become second nature in my workflow.

Just want to voice that I am also really looking forward to this feature.

A significant amount of work was invested in that VSCode plugin, AFAIK more than any currently-existing Obsidian plugin. Maybe even more than all current plugins combined

It’s quite a significant project.
But it made sense because VSCode is a code editor, and there was a significant amount of users who want a full Vim experience while still using VSCode as their IDE rather than (Neo)vim.
Is there really even a remote justification for making such a project for Obsidian? It’s a notes editor, not an IDE. And while its Vim experience leaves a lot to be desired, it is expandable* to some extent, and IMHO quite capable for a notes editor.
What might make sense is to offer such a project for CodeMirror 6, which is the future iteration for Obsidian’s underlying editor component. It is being used in many other products and has a big user base (most are online editors, but possibly enough desktop ones to make Neovim relevant).

* I’m the author of this plugin

I’m also in favor of this, though I’m concerned with how VIM bindings would interfere with Obsidian hotkeys.

There’s other, non-IDE projects that have this setup. For example, there’s a plugin for SublimeText that hooks directly to Neovim via APIs to give (as far as I can tell) the full VIM experience within SublimeText.

@esm90 I think there’s totally a justification. Obsidian isn’t a development tool like VSCode, but part of a notes app is care and refactoring old notes in addition to writing new stuff. As someone who’s into Vim to write a plugin for it, you understand the power and elegance of using it for writing and editing, and I would personally love to take advantage of all that a full-blown Vim client would have to offer.

As far as the CodeMirror 6 mention: I haven’t dug deeply, but from what I understand CodeMirror Vim bindings doesn’t have a maintainer, so I’m concerned about the future of that implementation.

Don’t get me wrong, I’m completely in favor of making Obsidian’s Vim mode as powerful as possible. I would personally not be using Obsidian without it, and although it covers what I need most of the time (80% of my usage is just the basics anyway, and the Vimrc plugin covers 10% more), we Vim users are used to not be limited.
Given this, I hope someone will have the appetite to make a full-fledged Neovim integration, because I’ll surely be amongst its users.
Also, I too am worried about the state of Vim bindings in CodeMirror 6, and this might eventually lead to someone (maybe even me, who knows) picking this up.

looks like a pretty simple way to add this functionality. No idea about how well supported this is, or how easy it is use, but at first glance it looks pretty simple.

(I am also very much in support of something like this, for the record)

This has probably been discussed a bunch of times before, but Vim support is far from ideal.

There’s a plugin for making a custom vimrc, which helps a bit, but text editing is just not the same without a regular Vim config.

Now, I know this would probably be a lot of work to implement, and I wouldn’t bring this up if I hadn’t seen it done well somewhere else, but Onivim 2 (an electron-ish app — it uses something else, but the point is that it uses web technologies) uses a Vim C library under the hood and it’s freaking fantastic!

It feels just like using Vim, for the most part. All the basic plugins, like vim-surround, for example, work great. So I thought I’d bring this up to see if this would be a feasible thing to do in Obsidian.

What really got my attention, as I’ve been following Onivim’s progress for quite a while, is that I think that app is developed by one person, so that got me wondering if this wouldn’t be easier to implement than I initially thought…

It would be great if somebody picks this up and implements a bridge between libvim or neovim and CodeMirror 6.

Any clue what’s the timeline? When is CM6 expected to take over CM5 in desktop Obsidian?

There won’t be a take over, they’ll coexist at least for a while.

This sounds to me like a long-term project that has many uses, but Obsidian is not a major one of them anytime soon (I’m assuming here that Vim mode on mobile is a niche).
But since there will be a switch eventually (CM6 is the future of CM, that’s for sure), it certainly needs long-term attention. I might be able to do that but only in a few months when other big free-time projects get cleared up. 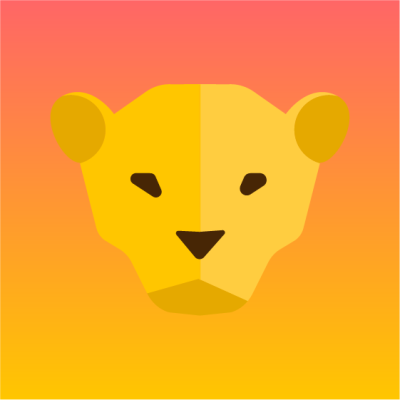 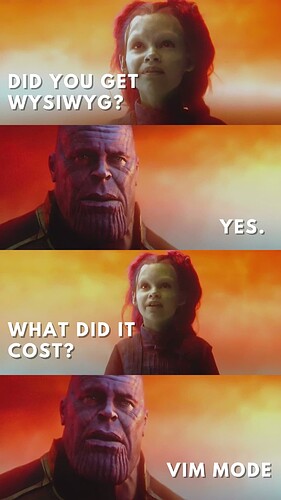 I made this meme in hopes to capture the mixed feelings

I really hope there’s a way in which the new “Live Preview” WYSIWYG editor will somehow support vim-mode.

I’m not a programmer unfortunately so I don’t know the extent of what it would take for that to happen.

What I’d love to know is what do others think is the best way to make this happen.

Is a donation our only hope? and if so is it a good idea to encourage as many people interested to donate?

I personally have been looking forward to the new Obsidian Live Preview editor for so long. I’ve been waiting to release educational content for Obsidian with high hopes on this editor.

The importance of Vim in Obsidian

I also believe that learning vim can benefits all types of writers, to write efficiently and in a much more fun way.

I’ve been working for months on an online course to teach people how to use Vim in Obsidian.

The new live editor is the future of Obsidian.

I totally understand this goes beyond the control of the Obsidian devs. If anything I’m super grateful for the new amazing “live preview” editor. but as you can image I have mixed feelings #happy-sad

I really hope that those of us who value Vim in Obsidian can find a way to make it happen in the new editor somehow.