Variables, and possibly !include in YAML

Or I would like to automaticly add working time counters. So I could create an project status page, where all variables of my working times are added.

I definitely agree. I meant to do a feature request but forgot to. Glad to see this. Below, I pasted a quote from a topic about moving lines from the current heading to the previous heading.

Move this line/block to the next/previous header

Sometimes I feel that it would be cool if Obsidian had exposed variables and methods to be used by non programmers on the fly. Like in this case maybe there would be a variable A (hLinesFromTop) that returns the number of lines down your current line is from the heading it is within. And maybe another variable, B (hLinesTotal) that returned the total number of lines in the heading that the cursor is currently in.

This way, if you wanted these kind of easy features like moving the current line to be the top line within the previous heading, you could pretty easily build a macro that would access the first variable A to swap the line up until it is swapped above the heading line of the heading it was within. Then it could access variable B to swap the line up to be the first line within that previous heading.

If variables are added they could be added in YML files that are dot-prefixed, enabling variable inheritance down to subfolders.

For example, in the root is a file .obsidian-vars.yml that defines three variables A, B, and C. Any file in the vault can then use all three of these variables.

I’m not saying this should be implemented, just that this is potentially a relatively straightforward way for it to be implemented.

Hi, I am looking forwards if these features will demanded by a lot of support.
It will be useful for novel writer to define the characters, nouns, events…

the we can wrote as

And it can support for workspace level, to folder level.

Did you ever try:

(requires Dataview for the =this. syntax)

Be aware that this is not standard YAML (but many YAML preprocessors support it). Plus, it generates YAMLWarning: Unresolved tag: !include … in the console.

Seems either the devs thought ahead, or just the used upstream library supports it. Yay!

Seems !!inc also works. So maybe just CodeMirror uses js-yaml and that supports these, or maybe in turn uses yaml-include.

Interestingly enough, Dataview picks it up and Templater doesn’t: 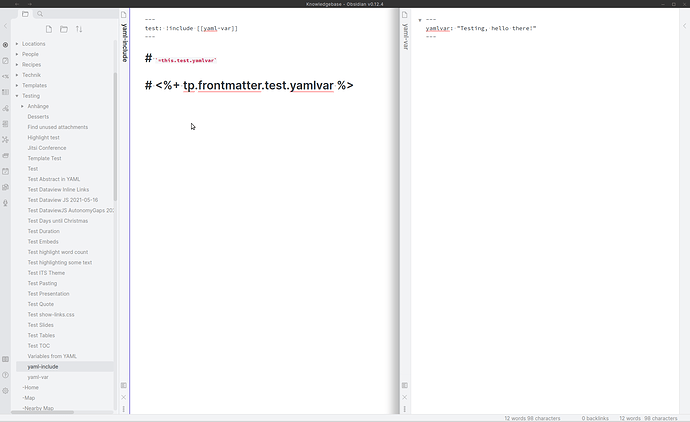 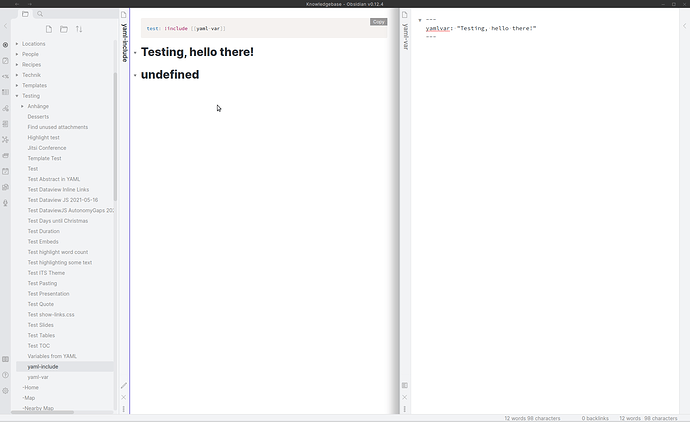 So I’d add to this feature request:

Please officially support the !include (preferred) or !!inc syntax, so we don’t see warnings all the time.

*EDIT: Too bad, so sad! After more testing, I found that it’s not !include working but an odd Dataview “feature”, because using test: [[yaml-var]] turns out to work the same!

Still I’d support this FR, by having !include officially supported in YAML frontmatter.

Will work with dataview