Still very new trying to get used to this program. Obsidian seems to have a bit of a flavor that I see in other newer programs on the market such as dynalist workflowy remnote clickup. They have two features that distinguish them from traditional computer apps found on windows and linux machines and although Obsidian is not nearly as bad as those it still has that flare. These features are;

I am not sure how this trend got started or what it’s purpose is but this type of UI has always failed the logic test for me and seems counter productive.

Does anyone know how I can mitigate some of these features? I found two or three themes that make the ribbon items more visible like the Golden Coffee theme for instance but with that theme the individual pane menu items disappear and you need to float your cursor to find them. Ideally I would like to replace the icons with text I am willing to give up some real estate to make that happen. I did add the plugin Advance Appearance and that seems to change font size and accent color but not my specific problems. The top left border I have two arrows I think that is from a plugin the back and forward arrow; Oddly the back arrow however small it is it has contrast but then when I place the cursor over it it actually gets dim, what purpose does that serve? And the forward arrow - it does not even exist I have to float my cursor in the area to have it appear.

I do not have problems seeing the text eyesignt it fine. This is purely about making menu items more legible and useful instead of worrying about how cute the interface looks on a youtube video. So looking for a plugin or way the make the interface less warm and cuddly.

You could try this: 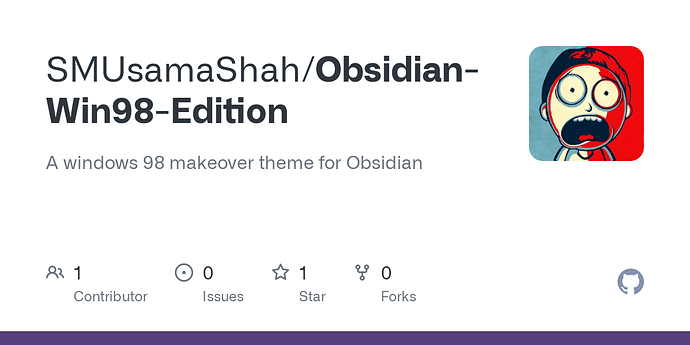 A windows 98 makeover theme for Obsidian. Contribute to SMUsamaShah/Obsidian-Win98-Edition development by creating an account on GitHub.

I would try out different themes in Settings → Appearance → Themes. All of the aesthetics are customizable via CSS, so if you’re comfortable you can actually change it to look however you’d like. Themes are other people’s versions of that.

I just copied that css file into the theme folder where the other css files are restarted and chose that in the Appearance tab and there is no change it just looks like “None” is chosen for a theme. This same things happened when i was looking thru github looking for themes that had a lost of contrast between the colors copied them into the theme folders and again when selected it looks like no themes is selected at all. Is there something about the css downloaded from githib vs the in the community section of the program sunce they all work fine?

You have to use the options in Settings → Appearance → Themes. You can install themes by browsing the Community Themes, then choose them from the Theme drop-down menu.

Edit: You might be able to install themes from Github by putting them in the Snippets folder and enabling them in Settings → Appearance → CSS Snippets.

i tried most themes in the community box and several on the github with no luck. I think if I can make the fonts black instead of the washed-out greyish colors they are would help. I saw thread below on font type though i can use that for font color but I can’t find font color in any of the css themes as a starting point to write the correct code in that css snippet. Not terribly tech literate.

Would be nice to alter that side vertical ribbon with the icons and put text on there. Even someting like an Obsidian Boom 0 what are they fonts all washed out in grey. The Illusion theme has the best contrast colors but of course it will not allow you to to change the vertical divider left to right its locked for some reason. All the quirky things on each theme a little different. What cant they just make the font black black. This is on Light themes i am looking at all background colors are non-white and they make the fonts a washed out monotone look. Cybertron is probably the best light theme in terms of readability and no disappearing menu items or other quirks I can find. If someone points me to a good tuorial on ow to modify the the css file fonts that would help Would like to try the Win98 theme if I Can get that to work .

How to change font? Resolved help

Here’s what I do: Open Obsidian’s Options menu Select “Appearance” tab Under CSS Snippets, select “Open snippets folder” icon Create a blank text file in that folder with the suffix “.css” (“My Font.css”, for example) Type the following 4 lines (switch “Times New Roman” to any font you wish) (use regular single quotes, not the fancy quotes this forum software corrects it to): { font-family: 'Times New Roman', serif !important; } Save the file Back in Obsidian,… 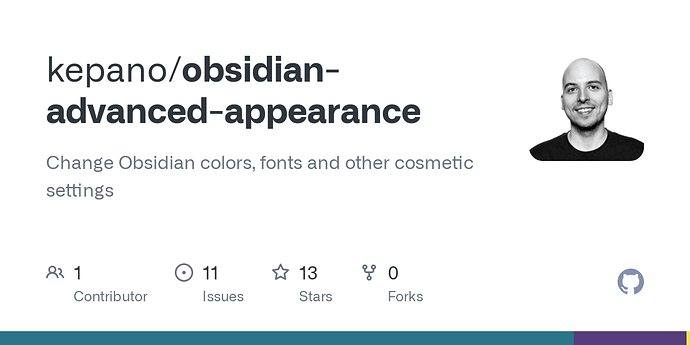 I did add the plugin Advance Appearance and that seems to change font size and accent color but not font color.

Testing some elements. If you create and enable this CSS snippet, do you see any change?

Only change I notice is the font in the folder/note column is darker. Not the tool rubbon but the folder files. Thanks.

Element by element…
Now add this: