This is this system’s schema: 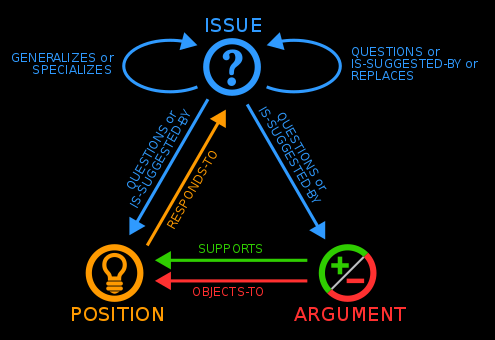 I wonder if anyone has worked on this topic? Can you share some tips? What is your work-flow?

GitHub - zsviczian/obsidian-excalidraw-plugin: A plugin to edit and view...

@zsviczian has created some great supporting videos and is very enthusiastic.

I’d be interested to see where you get to with it.

I think OP doesn’t merely want to make IBIS diagrams, but wants to use issue/position/argument as note types in obsidian, linking them. I’m not sure that Excalidraw accomplishes this.

I wanted to do something like this in Obsidian a while back (though I wasn’t familiar with IBIS, so thanks for the link OP). I ended up abandoning it because it would require support for link types from Obsidian, which hasn’t been implemented yet afaik.

Breadcrumbs plugin may give you the link-type relationships?

Does IBIS really require link types? A note linked to another note can be tagged as either positions, +ve, -ve etc. Basically we need a hierarchical graph to represent the links; juggl plugin?.

Do it all on one page and use minimap plugin?

I wasn’t aware of Breadcrumbs, that looks useful. I don’t see a completely hierarchical approach is ideal for IBIS though. I don’t see how a structure where an argument is a supporting argument for one position, but a contradicting argument for a different position could be implemented, for example.

The argdown plugin has something similar to what you’re asking. Here’s the link to the github repo but it’s on the community plugin list now: https://github.com/amdecker/obsidian-argdown-plugin

I think you can use Dataview along with Breadcrumbs to accomplish this.

And define the relationships in Breadcrumbs as you need.

@EricG is right that a simple implementation of IBIS does not require typed links. There are four basic node types (issue/question, position/answer, pro/supporting argument, and con/attacking argument) and the link type is implied by the node type.

The only type of node that you couldn’t have, as @ardente implied, is a hybrid argument node that supports one position and attacks another. You would have to duplicate the argument into separate supporting and attacking nodes instead.

But @ardente is right that even with the limitation imposed by an implementation of IBIS without typed links, IBIS is still not necessarily hierarchical, since a position could respond to multiple issues, an argument could support (or attack, but not both support and attack) multiple positions, and an issue could question multiple positions and arguments.

So you don’t need the Argdown, Breadcrumbs, or Dataview plugins for a simple graphical IBIS implementation. You only need to tag each node/note with one of the four node types, and use the Style Pane in the Juggl plugin to style each node-type tag with a different icon and to style the links as directed edges.

When you’re building your issue-based information system, you just need to remember the IBIS rhetorical rules, which are well designed and summarized in the schematic diagram that @Ooker embedded in the original post above.

IBIS is a great basic set of node types for rationale structuring, but you can add more node types such as: a generic information node that provides extra information about another node, and a decision node that indicates that one of several positions about a decisional issue was chosen from among the others. (Both of these extra node types are in Compendium, which was the most famous IBIS software.) An evidence node type can be useful for attaching to argument nodes, since evidence is usefully distinguished from argument. I have found inspiration for other node types in the bCisive Online Editor, which has different sets of node types in its left panel, such as the “explore options” set, “test hypothesis” set, “analyze reasoning” set, “capture discussion” set (which is equivalent to IBIS), and “evaluate” set.