I’m new to PKM domain, especially the when and the what to share online, would love to hear your thought on following questions:

Interested to follow this thread, thanks for posting. I’m curious how people are using the publishing feature (paid) of Obsidian, it’s an interesting concept.

You may know this, but in case not: Andy Matuschak (former research head at Khan Academy) publishes his ‘notes’ using Obsidian… as a sort of work in progress/best thinking (so far) on topics he’s researching and thinking about. It’s a useful reference point that may help you.

My own thoughts so far:

A quick summary, with a caveat: Gladwell is a journalist and best-selling non-fiction author, so his standard of what constitutes a “shareable” piece of writing is very high!

That said, for Gladwell he says that something he is “Talking About” is the product of a lot of “Thinking” that was previously done to iron out the kinks and make his “Talking” as compelling as possible, as well as easy to follow and understand. For him, something that he is still “Thinking About” is usually VERY HARD TO TALK ABOUT.

By “hard to talk about” he means his thinking is still confused and changing. He may not be able to find the words. Or he may be misunderstood when he tries to ‘talk about’ the thing he’s still thinking about. It might come out jumbled, long-winded, or just plain wrong (as in, even he might not agree with himself).

This might sound a simplistic distinction, but I think it’s actually profound. The point Gladwell is making is that we only really know what we think and believe, by writing about or orally expressing it and then continually refining it. With “use” over time the ideas we’re thinking about take form and shape, as they make more sense to ourselves. If you like, the “story” starts to mature.

Matuschak takes a different view from Gladwell, because he’s explicit about the fact that his thinking is not yet finished. He’s sharing his research and “thinking process” rather than a finished product. Moreover, this is consistent with Matuschak’s personal brand as a researcher: he wants to be known as being at the leading edge of current thinking and practice in his field. And he’s already established as an expert in his field, so he has credibility sharing his thoughts about where the field is going.

Gladwell, by contrast, is selling his opinions. His personal brand is as an opinion-maker who shapes the thinking of others. His thinking needs therefore to be polished, and he prides himself in his story-telling. His “product” of thinking is very refined, entertaining and easy to follow.

So in other words, I think the answer to your question depends on the personal brand that you want to project. Do you want to share “refined thinking” or “thinking in progress” with your audience?

If your audience is looking to you for what we might traditionally think of as “expertise” then I would suggest the Gladwell approach is the better one. An audience tends to turn to experts when they want “answers” which are credible and in some way judged to be “right.”

Alternatively, if your audience is perhaps more sophisticated/advanced in your subject matter, and if they will think for themselves (whatever you say), then you might want to expose your “work in progress” as food for thought, inspiration, provocation etc. In this case, like Matuschak, you are positioning yourself as an explorer in a new field or of an as-yet-unsolved problem. In this case, others will find your thought process itself compelling and valuable.

Thanks @NeuroJitsu for your thoughtful answer,

I’m a fan of Andy’s EverGreen note concept, by the way. I think it make sense to have a targeted audience in mind. I think for audiences who familiar with PKM concept, they might be more comfortable with reading Obsidian Publish style than traditional blog post, but for majority of internet users, (who stumble upon your content through link, google search, etc) they will feel less disorienting with blog post style.

I see some folk provide both style of contents, for example, Paras Chopra:

Love to hear how other experts opinion as well!

After some research, I think I have a better understanding about the representation style of PKM/Obsidian Publish vs traditional blog post.

I think this illustration did a pretty good job. 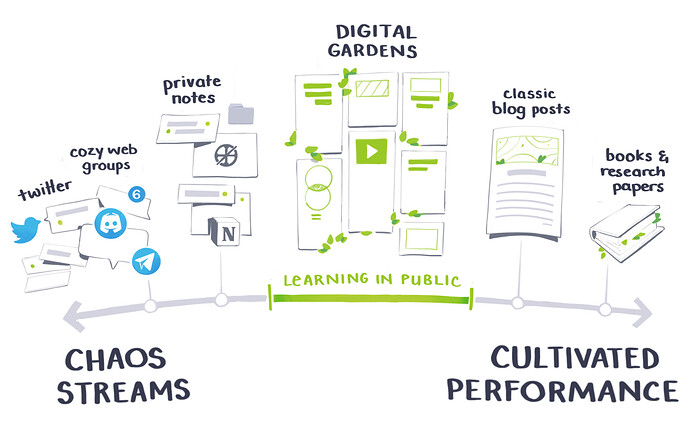 On the spectrum of Chaos <–> Orders, Digital Garden or PKM sits somewhere between private notes (daily personal journal) and blog post. And the reason it has its style is because it optimizing the nature of exploratory and its non-linear, non-chronological of a digital garden.

And the more I think about it, the more the term Digital Garden here make more sense. As a garden, people can come into your garden through different entry points (MOC/Search…) and from that they can wander through different patch of land where some plants are fully mature, well-pruned, Evergreen,… some are still in their seeding, budding state. And it’s for you, the visitor, decide to navigate freely this environment. Sure it can be disorienting, easy to get lost, but it could also be rewarding/refreshing.

The original blog post is from here: A Brief History & Ethos of the Digital Garden

@tuancao - my pleasure. Yes I agree that Obsidian publish might be more suited to audiences familiar with PKM. Another ‘use case’ might be audiences that are are the early stages of exploring a topic, for example as an alternative format for hosting Q&A content in a more interactive form.

@tuancao - nice find. I like the metaphor of a garden for all it’s obvious growth associations that frame PKM nicely.

I think there’s another relevant but subtly different distinction from chaos-cultivated (ie the garden metaphor), which offers another way of thinking about publishing blogs vs notes: that of Practitioner vs Academic. Both can be thought leaders, but their thought leadership is for a different purpose. Academics are adding to the toolkit of insights, theories and explanations. Practitioners either build tools that non-experts can use, or they support other professionals to solve complex problems using research-based principles and concepts. It’s the difference between say a physics professor and an engineer or architect.

In gardening terms, you might think of buying stuff from the garden centre (where your ideas come from, eg research by academics) and your cultivation of a beautiful garden for a specific purpose (eg a Zen design garden is a place for contemplation and mindful presence that a special “space” creates through its “nature perfected” immersion in nature… whereas a vegetable garden is purely function and is judged by the taste and yield of its fruits).

Many of us using Obsidian are not academics, but what I would call practitioners. That is, we are not in the business of creating new understanding and knowledge. Rather, our interest is in how to USE existing knowledge, and apply theories and insights to practical problems.

Given that a blog is mostly a marketing tool in reality, the difference between a published set of notes and a blog is simple: one is “selling” your ideas, the other is a “discovery experience” that places more responsibility on the user to find their own way.

Just some top of the head thoughts…