If you have too many tabs opened there will not be enough space to list them all in one screen.

I suggest vertical tab list as option, exmaple would be 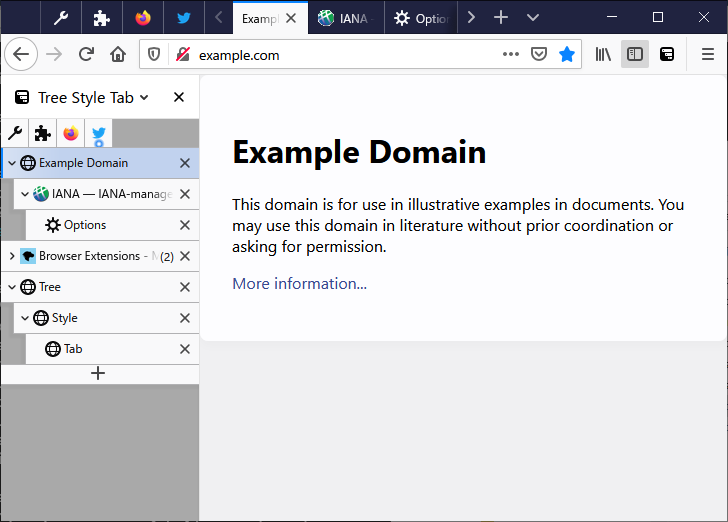 Tree Style Tab – Get this Extension for 🦊 Firefox (en-US)

Another vote here for VS Code style behavior where you have both the flexibility of having multiple panes, but each pane can have tabs.

In terms of the UI, I would suggest that opening a note via the fodler list or quick-pick would replace the note in the current pane, whereas holding CTRL would open it as a tab in the current pane (with an option in preferences to switch that around according to personal preference).

Just want to add that VScode-style tabs are also fantastic for “large print” users (where the amount of text we can have on the screen at once is limited). I can’t have more than 2 (maybe 3) panes open at readable zoom levels before I trigger a migrane from squinting at it.

Tabs would make my life much less painful.

A possible simple solution that would resemble the “sideways tabs” items linked by @coldwinds is a plugin (perhaps a core plugin) that replicates the “open editors” functionality in VSCode.

Basically, when you open VSCode the sidebar not only contains the file browser but above it is a separate section/pane that contains a clickable list of open files.

Note also that some capabilities users want may also be obtainable by combining:

That would be great!!!

Agreed. This is how I use VimWiki. I really miss this ability in Obsidian.

. I love VS Code, but I really don’t see the point of having multiple tabs within a pane. I use tabs in VimWiki for handling different types of pane sets (a tab for each project, with panes for different aspects of the project). Maybe there’s something I’m misunderstanding about how people use panes in VS Code.

+1 for tabs with VSCode style. That would be super great

Chiming in here for this; I’ve found an Obsidian Tabs extension but it seems to assume that you want only one pane, whereas I miss the vscode/[[foam]] like setup in which each pane might have its own tab set.

Would love to see a tab mode. It’s currently inconvenient to switch between notes.

Same here, I would love the same system as in VSCode. With the incoming WYSIWYG mode, that would be a perfect combination (the tabs pluging is a bit klunky and doesn’t really have the expected behavior)

Do we know if this is on the future todolist of the dev?

There are a couple of plugin for doing this.

@WhiteNoise: would be more useful to briefly describe the recommended plugin, and the differences among them; or at least link to them.

I’ve found these so far:

With the official Plugin API now being a thing, it’s time to start migrating the existing Andy Matischak mode CSS into a togglable plugin with more power and options. I now have a release of an initial implementation, ready for people to play around with. It works like the 2.7 version with headers on the side. The header width and pane width is configurable via the settings, and there is also a command to toggle it on and off (which you can configure a hotkey for). Changing the active pane …

Once you’ve split it into two panes which are side by side, click the three dot menu in the top right corner of a pane, and split it vertically. That should create tabs.

Do we have any updates on this? It would be really nice if Obsidian had this feature. The current plugin (Obsidian Tabs) doesn’t have the same behavior as tabs in, let’s say, Chrome of Firefox, which is what I would expect. I’m sure I’m not the only one! Would be amazing to see this in a future update.

I agree. I really want this feature.

The standard to follow would be vim tabs+windows or tmux windows+panes.

I have multiple “note contexts” I focus on. Being able to have a tab per-“context” would be wonderful.

I still cant believe we don’t have functional tabs yet in obsidian. I discussed in a post my ideal vision of tabs, genuinely cant wait to finally have tabs included eventually!

Obsidian is NOT a Web Browser, Word Processor or Database. What it IS is a PLAIN TEXT application that uses Markdown and works on multiple operating systems (Which are all different) like Windows, Linux (various flavors) MacOS, Android (Various flavors), iOS etc. It IS extensible but that is not the core of the application. The developers ARE Amazing.

And that do NOT exclude it from INSPIRING itself from OTHER applications which HAVE been iterated over FOR years to make navigation AS effective as possible. Suggesting such FEATURES also does not imply that the DEVs aren’t amazing, just THAT some accessibility features might be worthwhile for part of the community.

I’d like this feature as well. The Obsidian tabs plugin works, but I don’t like how it shifts the tabs around once you open a new file. The active tab is also placed down in a row of its own instead of just being side-by-side with the other tabs. It’s really confusing