Spellchecker only displays suggestions for one language

I use English (UK) and Indonesian in my spellchecker quite often, but whenever I go to get a suggestion, it only displays Indonesian words.

For example, here are the suggestions for “Amongt” (Amongst) with both English and Indonesian in the spellchecker languages.

Versus only English (United Kingdom). This displays relevant suggestions.

This might not be a bug per se, but it feels like one. If it isn’t though, a feature where we can choose suggestions per language would be very useful.

To display suggestions from all languages specified in spellchecker languages.

Only displayed suggestions from one language.

Do you use only one vault?

Yeah, just the one.

If in chrome you have a smilar setup, what do you see there?

unsure if this answers the question, but using the same word (amongt → amongst) displays this

Interesting.
I double-checked the languages used in the chrome spellchecker, but no difference in the results

If you misspell amongt in chrome, what does it show?

If in chrome it shows the same thing, that this is not an Obsidian issue, it’s an issue in the way chrome’s spellcheck (which obsidian uses) works. And we have no control over it.

so, I attempted to be a little more thorough in my testing, and tried words that could be more commonly misspelled in both English and Indonesian, here I use “karna” (shorthand “karena”, but it isn’t in the dictionary so it shows suggestions), which could be “karma” (EN), or “karena, warna, karya” (ID). 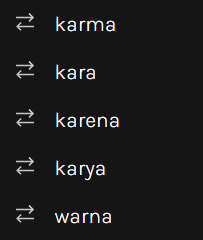 I’m starting to suspect that this is going to turn into a wild goose chase (since you said Obsidian uses Google spellchecking) - and I’ll just have to live with it - but if maybe a dev or someone equally knowledgeable could shed a little light on this, it would be super appreciated.

I am also experiencing some odd suggestions when I have more than one language activated (in my case, English (Aus) and French).

I hope this helps.
For now I am just going to keep one language at a time switched on.

If you enable the same languages in chrome and go for example here https://www.rapidtables.com/tools/notepad.html
what suggestions to you get?