References should work for all lines

Block references work inconsistently across different types of lines. For subheadings, items in marked lists, quotes, etc they work just fine but for most combinations of those, block references are broken. 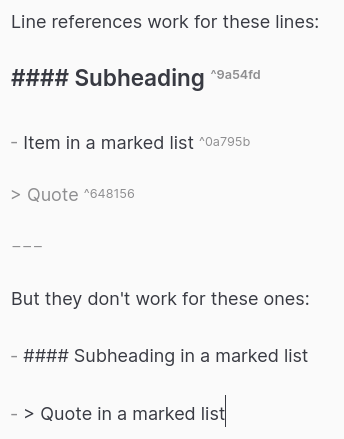 For example, if I try to reference a quote that is inside a marked list with the [[^^ syntax, it doesn’t show up on the suggestions list.

Since I structure all my notes as nested marked lists, this often breaks my working process.

To make ^abc123-like references work for any given line.

When I need to have a reference to a line, I change it to make it searchable with the [[^^ syntax. Then, when the reference link (the ^abc123-like) is created, I change the line back to the desirable form.

Unfortunately, when I change the line back, the reference gets broken and is not displayed in the popup window anymore: 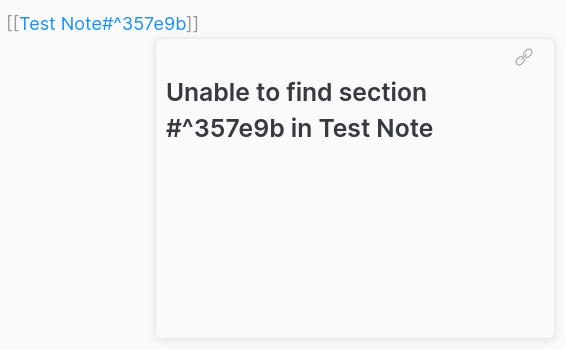 Block reference to work for headers within lists Feature archive

Use case or problem When we create a reference to a certain line with [[^^ it is created both for common lines, list items, and headers. But when it refers to a header that is a list item at the same time, it ceases to work. For example, this… [image] …results in a broken reference. [image] Proposed solution Please, make it possible for references to work with headers within lists. Related bug reports

(It can be considered closed when this one is closed.)

Steps to reproduce Create a block reference by typing [[^^ and selecting a block. This appends a hash to the end of the block, for example ^abcdef. Type any number of # at the beginning of the referenced block so that it becomes a header. Expected result The block is still referenced by its hash value ^abcdef. Actual result Upon hovering, the popup says Unable to find section #^abcdef in {note_title}. Clicks lead to the beginning of the note. Environment Operating system: Arch Linux (5.11…

Block references work, but individual lines can’t be referenced unless they are formatted as discrete blocks.

A “block” can be a paragraph, a blockquote, a list item, etc. In general, anything that has empty lines before and after is a block.

If a quote is inside a list, it won’t have empty lines before and after it, so it can’t be considered a block or linked to.

Oh, I see. Well, it seems there’s no way around this, right? Like, probably that would be too much of an undertaking to redefine what a basic markdown entity (like a block) is.

Block-level referencing is relatively easy to target with markdown syntax, and it is probably a good-enough delimitation for most use cases.

But this is a feature request, so line-level referencing might come in time

+1 on this feature request.

I’ve been using Outliner & Indentation Guide plugin for my daily journal. And some of the bullets I formatted them as headers for sectioning and better readability. But now I’ve stumbled upon that I cannot do block reference to that particular header-bullet.