I have tried using CSS Combinators, but because everything is wrapped in a div (and I can’t get div > p + div > p to do anything) that doesn’t work. I have also tried all variations of p.first, p.firstpara, p::first, etc.

When in reading mode, I would like to reduce/remove the margin underneath headers. Additionally, I want to reduce/remove the margin between paragraphs and lists. Where the issue lies is that either I have no spaces between paragraphs (removing the bottom and top margins means there is nothing spacing subsequent paragraphs out), or lists and headers overlap (if I use a negative margin on the bottom of the header and a negative margin on the top of the list)

I am not experienced enough in CSS to be able to specifically select the elements I want, and I think that is the root of this issue.

it would be easier if u just change the bottom margin of the headers. in that way, it will affect only those of header and first para or first list. replace or add relevant h1-h6 to ur preference and adjust how much e.g. here using 0.5em

if u really need very specific control, here is what i use to adjust margin between h4 and the first para. but this require mgmeyers’ Contextual Typography plugin which adds a number of css classes to identify the top level divs. so .el-h4 below is coming from the plugin’s addition

anything else is up to ur creativity 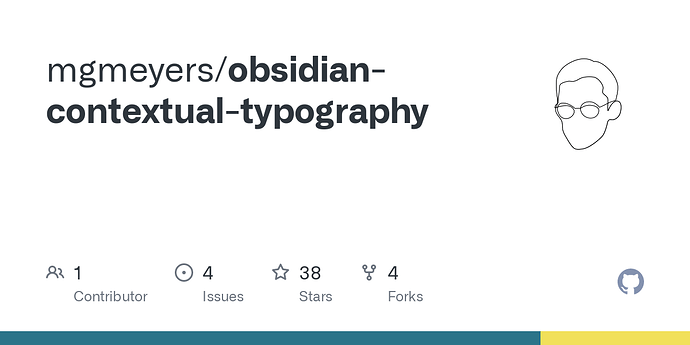 Contribute to mgmeyers/obsidian-contextual-typography development by creating an account on GitHub.

Contextual Typography sounds like exactly what I’m looking for. I need a way to differentiate the different CSS elements, so adding classes to the parent div is perfect.

I will experiment with that once I get home.

it would be easier if u just change the bottom margin of the headers.

Not exactly, because the top of the paragraph has margins of it’s own, which means if I want them closer I need a negative margin on the header (which I currently have).

Here is the final CSS I ended up going with, thought I’d post it here if anybody else wants it