Continuing the discussion from Vault size over limit:

I am trying to sync my vault that had previously exceeded the limit. I removed large files and my folder size is less than 10gb but it is not syncing. The sync “Vault size over limit” feature still shows them under “View largest files” and Purge is not working.

how many devices do you have?

if you hover over the sync icon, what does it say?

Thank you so much for your help and quick response!

I have three devices. The sync log looks like this on two of them and the third was out of date so I tried to update it. Hovering was saying “Vault over size limit.” I also tried disconnecting all of them and re-syncing my most updated vault, but that didn’t work either and the log remained the same. 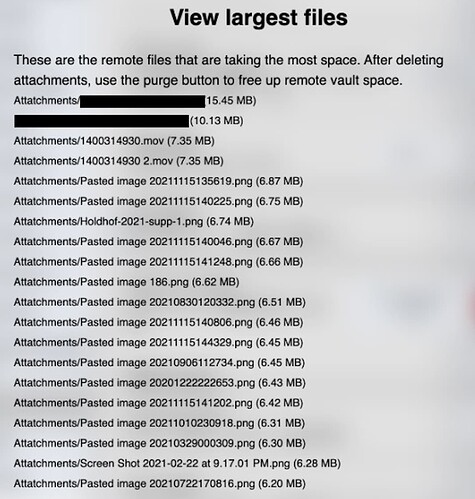 I think I may have been able to sidestep it temporarily though by just making another vault and not syncing any attachments in the first place.

Edit: It would still be nice to fix this so I can sync this vault with selected attachments but it is not urgent