Sorry for making the title confusing… I have to explain it by code and an example…
Some sort of bug, but not exactly. May cause a crash while running the code.

Try to create a new note called “quote_bug”, then copy and paste the following content:

It makes sense because the title/header that being linked was edited. No corresponding “link/content” for it to stick to. So it starts to quote itself over and over. While editing a long note, this can be a disaster, which leads to a software crash. 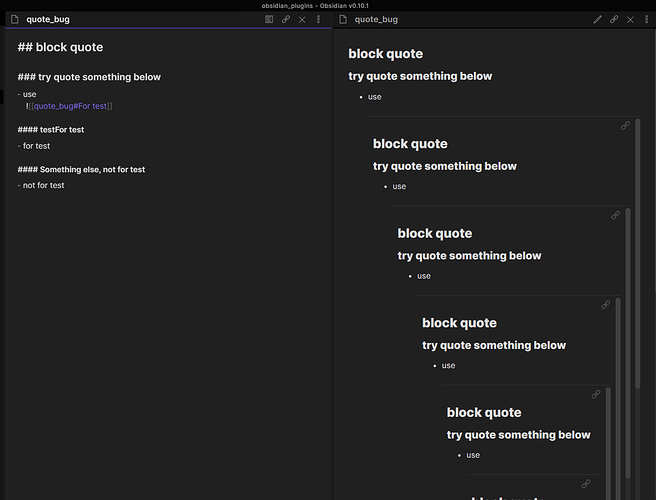 Sometimes you want to quote a block in the same note. And sometimes you will edit the header. Maybe set up some limitation of “the number of times that can quote” or check/update the link right before reloading the content.

The behaviour, while odd, is correct because if you don’t get a hit on the header, we embed the whole file. Which is what is happening here.

We limit the depth of embedding to limit these weird cases of inceptions.

This will eventually get fixed once we implement a proper header rename propagation.

Did this actually cause a crash for you or just this odd inception effect?

I can understand why this is happening. And it makes 100% sense unless extra constraints are added to the logic of the software.
It caused a crash once (with a note of around 3k characters). After reloading for a while, the whole window stopped responding.

Perhaps we should avoid embedding if there is no hit and it’s the same file.
Some thing potentially can happen with block reference. But it’s less likely since you change the text not the block id

Will update if I got any better idea.

4 is planned feature. We’ll think about the others.