Panic - two copies of my vault

After a massive number of earlier iCloud syncing problems I see two copies of my vault and I don’t which one to trust. 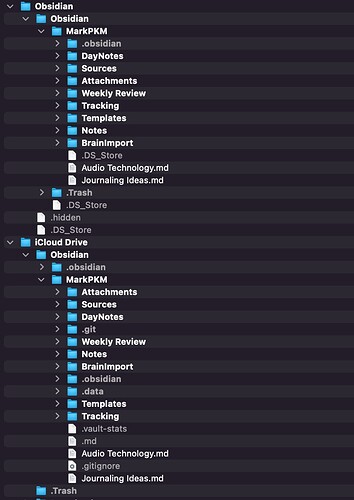 I think the screen shot says it all.

Which of these is my real vault and which one should I delete?

I’m not sure, but I’ll reply now just to try to help.

From what I remember, you can’t use the main “Obsidian” app folder as a vault in iCloud. You’d rather want to have your vault located inside that folder.

It looks like you named your vault “Obsidian”. And so when you went to upload to iCloud, I guess it automatically used the Obsidian app folder as the vault location.

And I’m sorry, I wouldn’t know how to know which is the correct version. But I do suggest you not name your vault “Obsidian”.

@romebot you were having trouble in this thread: Obsidian iOS: multiple folders = multitple vaults?

I wonder if it is same cause? I noticed you have the same vault name as “Obsidian”. And I am wonder if this is causing weird conflicts? (But I don’t know!)

Thank you for taking the time to answer on Christmas Day.

The vault is named MarkPKM. When I was first setting it up, I set it inside a folder named Obsidian and apparently somehow that got duplicated. Honestly I think that is a red herring.

Rather than try to sort it, step by step instructions for creating a new iCloud vault from scratch might be easier. I can always add the notes with a copy and paste.

If this happened to me, I would stop sync, and stop Obsidian, then use Beyond Compare to compare the two instances of the vault to confirm which set of data I would want to be the vault of record. You can get a trial of BC, so no need to purchase it just for this.

The vault is named MarkPKM

Oh yeah I now see that in the top, pardon! But in the bottom, it looks like your .obsidian is inside the Obsidian folder directly. Yes, perhaps a red herring, but maybe a symptom of whatever went wrong.

In the end I did a rename of the vault via iOS and it turned out the one under iCloud Drive was the odd one out.

FWIW From a personal perspective, I think that the MacOS use of the iCloud drive needs to be more streamlined, It’s should ask me to navigate a folder to select a vault. Like iOS it should present me with a list of folders stored in the iCloud.

There also needs to documentation on handling vaults when iCloud gets stuck.