Obsidian Mobile letting me down …

Transclusion not working, no PDF export …

I have been using Obsidian alongside Craft for a while now. My purpose is to test the usefulness of both applications for my workflow before settling in for the long haul. As one would expect, they both have their pros and cons. My bias is toward Obsidian due to the advantages of using plain, md files that can be accessed using any application capable of dealing with plain text files.

One of my frustrations is the lack of feature parity between Obsidian on the Mac versus Obsidian mobile (OM). This is important to me because I use my iPad for a lot of my work. That use has increased with my new 2021 iPad Pro.

Given that OM is v.1 the lack of 100% parity may be expected but makes an efficient workflow difficult. Craft on the other hand, insofar as I’ve seen, has feature parity between its Mac and mobile versions.

OM lacks the ability to export to a PDF, whereas on the desktop this is not a problem. Many of the desktop plugins also do not work on OM.

Another example of Obsidian’s lack of feature parity is transclusion of a PDF document. On the desktop version this works perfectly. However, PDF’s do not render in OM, as shown below. This week I was in a finance meeting taking notes and trying to reference a long-range financial projection report in PDF format from our CFO. It would not render in OM so I quickly switched to Craft to take the notes while having the PDF opened in a second window of Craft.

I’m going to continue using both for a while with the hope that an update to OM will result in feature parity. But, I can’t continue running dual systems for too long as doing so obviously involves extra time and work (minimized by importing from the Obsidian vault to Craft as needed).

This post is not a rant or complaint, just an encouragement to continue working on feature parity between the mobile and desktop versions. 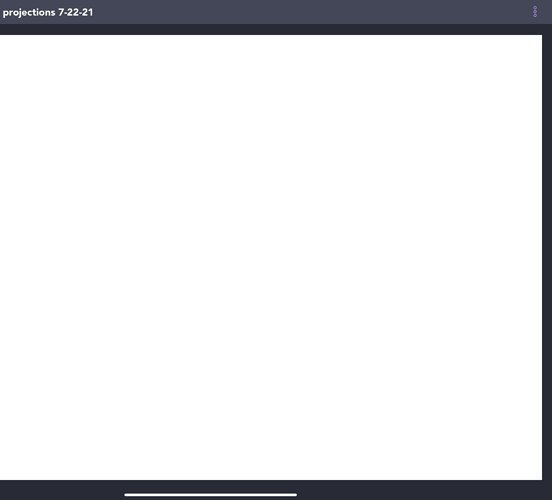 The PDF bug is the biggest issue for me. The workaround is to go into Files and view it there, which is a pain because of the sandboxing — you have to either use “open in” and view in an app other than Files, or view it in markup mode.

I think it’s better to avoid lament-style post and open one thread per bug/request.
Obsidan mobile is 99% the same Obsdian Desktop. I really have to think hard to find something different. (The pdf export and search that has yet to be implemented)

Anyway, PDF and PDF embeds do work, at least for me. I suggest you open a bug report and attach a screen recording of the PDF where emending is not working (no themes and no third party plugins enabled), if possible attach the pdf too.

EDIT there is already a FR for export to PDF and @DGGoingUphill already filed an issue regarding PDFs, waiting for a repro file.

I was not intending to lament.