I just used the app normally, writing shit, editing things, linking stuff, bringing in old texts.
and once im about to end my session obsidian starts to crap the fuck out. cant even open a note. i close it and decide to check iCloud Drive on the pc (its like a virtual harddrive)

I go into the folder and its a FUCKING mess. I dont know what is going on, if i need to check some setting on iCloud or some shit, bu i had .md duplicated up to 56 times “NOTE (56).md”

has anyone suffered this problem??? i honestly dont want to buy into ANOTHER monthly subscription. im uptill here with those subscriptions. i already have a cloud solution but i cant make it work, i ve been having problem since i got the app (this week) havent been able to make it work well.

maybe someone has a suggestion on how to make it work.

also not just notes, but everything obsidian touches start duplicating,

There’s been a few reports of problems using iCloud Drive on Windows, but we haven’t seen a reproducible pattern yet explaining why.

Other people have reported data loss, though. This is the first I’ve heard of rapid duplication.

Are you using any other services that might be doing something automatically to these files?

This happened to me too, horrifically. It absolutely disrupted my ability to use obsidian and i ended up practically abandoning my vault. I’m still trying to figure it out by forcing all the files into one singular icloud folder, which i will then have to go through and manually delete around 8 duplicates per file. The issue I think had to do with the different cloud locations that were chosen for the vault initially, and maybe that they didn’t have the same name. So i had set up a vault on my ipad, iphone, and computer all independently; then added them all the vault re obsidian sync. I assume the problem was that I never actually established a DEFAULT vault or something; not that i have any idea how to do that or any clue around the necessity of it. I’ve never seen anyone else talk about it so i just assumed it was my fault for being an idiot lol

So i had set up a vault on my ipad, iphone, and computer all independently; then added them all the vault re obsidian sync.

If you set up any of these in another cloud sync location, you ended up with two (or more!) syncing services fighting to sync the changes one another was making. This is what we call a race condition, and it tends to lead to data problems—duplication and/or data loss.

Yes a lot of people have had this problem. Including duplicated settings files too. I personally wouldn’t use iCloud or OneDrive for my notes ever. For some people it works fine, but wow I don’t trust it.

And everyone: Don’t consider syncing tools as a backup. Make sure to keep backups in some other way too.

i already have a cloud solution

What “cloud solution” are you talking about? Are you also mixing a 2nd sync app on top of iCloud?

I am experiencing this issue occurring too. I have no choice but to operate across both Windows and IOS due to work settings. When working in an obsidian note (particularly my daily note which is open all day) a message pops up saying the file has been altered externally. I was looking for a pattern, but can not see what triggers this. However, as soon as it happened today, I immediately opened the folders in icloud drive and there is was a duplicate 2022-03-24(01). It did this to yesterdays note - there were 7 duplicates.

The next day when Obsidian is open it reindexes and fails to read the duplicates - within obsidian it appeared impossible to delete the file - but when deleted in icloud drive, it immediately resolves in Obsidian.

As stated - many of us have no choice but to work across platforms due to using Windows at work but using iphones/ipads as well. Any ideas or solutions beyond suggesting not using icloud would be welcome

for being an idiot lol

yeah everyone here is making me feel like an idiot just for asking.

just iCloud on my ipad and PC. Ive put in HOURS of work yesterday, come back this morning ( left my computer during the night, hoping it would sync…) and when i jump onto my ipad it would all be there waitign for me because i have an early morning and decided to work from somewhere else and i open my ipad. icloud didnt sync anything. i check my pc via Team Viewer and i see the icloud folder its stuck syncing half the files. at least the file duplication has stopped. but now nothing syncs.

ive heard of solution is to restart icloud but i dont know if that deletes my files but im just tired of the restrictions these systems (both android and ios) put on the access to storage its fucking ridiculous.

still waiting for icloud to upload everything. whats the fucking point? i dont understand. whats the fuckign point of all these services that dont even work properly. i have an amazing software that cant even get along with any ecosystems. this is besides the point.

now i am even scared of opening my ipad and woudl overwrite with old files. i dont know.

no, its just icloud.

yeah everyone here is making me feel like an idiot just for asking.

We’re asking clarifying questions, and warning that iCloud acts like this sometimes. I see issues with iCloud popping up all the time. It’s not your fault!

same here, i get that message pop up all the time.

i have the exact same problem as you i ahve to delete duplicate from icloud drive windows cirtal harddrive and it works.

WE ARE ON THE SAME BOAT.

honestly i was thinking of using my synology NAS but nothing can access it, not ios, not android. makeing me feel like the NAS is becoming usless if it it live within this other ecosystems.

thanks. ive been dumping very old texts that i even forgot i wrote and linking and organizating and finding all this old thought connect in an incredible way. its crazy… you know? in a good way.

I can say that a thing that is giving problems to icloud drive is ALL the data.json files they are all stuck updating.

here is a screenshot 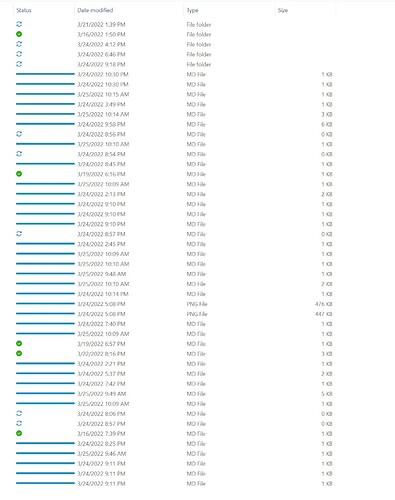 This JSON difficulty an interesting thing…

Regrettably, iCloud Drive and Windows really don’t seem like they work well together right now. Feel free to continue to report on this issue, but I don’t think it’s a problem Obsidian can help with.

You might want to try some solutions from eg a search for “iCloud Drive not syncing on Windows [yourversion]”…?

I’ve recently installed Obsidian (0.14.6) and made my vault on my iCloud Drive. I am also on Windows, and am seeing similar bad behavior with files that Obsidian manages, getting duplicated, failing to sync, and losing information in the notes that I’ve written. As mentioned above, I also am now a bit nervous about entering any new data in my vault when it’s on an iCloud drive.

I would assert that at a minimum the docs should be updated to indicate that vaults installed on iCloud drive are not supported (or maybe that iCloud on Windows is not supported?). For example, it says here that Obsidian files sync fine with iCloud.

Having used iCloud Drive on Windows for a couple of years now, I can say I’ve never seen this problem with any other application, so the idea that somehow “iCloud Drive and Windows” don’t really work well together doesn’t totally hold water for me – there is something about the way that Obsidian is accessing/writing to files, possibly while iCloud background sync is occurring, that causes duplicate files to be generated.