I redesigned Obsidian icon to better suit MacOS Big Sur style. Inspired by graph view.
Hope you like it. 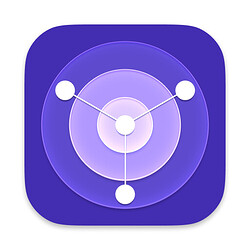 But thanks for tutorial how to change icons on MacOS.

I really do hope this iOS-ification of Mac icons does not end up spreading everywhere else, simply because it’s easier to just have one icon. Sigh.

Nothing against your design, to be clear. Just Apple.

By the way there is a slightly better, though also slightly more involved, way of changing icons on macOS. You’ll need to find a tool that can create ICNS files, usually you can find something easy that just takes PNG, and drop the “SoftwareName.icns” file into its SoftwareName/Contents/Resources subfolder.

That will not only change the icon you see in Finder, Dock and Cmd-Tab, but also inside the software itself, for alert dialogues and so forth.

Not sure if that even matters with non-native stuff like this though. Does it even use Mac dialogues?

It’s a very nice design. I prefer the crystal because I’m used to it, but your icon looks beautiful.

Great work on designing this.

I love the concept of overlaying the graph on the icon.

May I suggest that it would be great to have it look more like the graph. Sort of reminds me of a the wheel on a bank vault atm.

I’d be keen to change if you did this.

Of course just my opinion and I’m not much of a designer.

Hey, join me on this Figma file for updates and feedback
Figma Web

Thanks!
I agree it kinda looks like a vault than a graph. Something more like the graph would look better. I need to do a lot more research.
Btw, you can join here on this figma file for updates and giving feedback.

You can relax. There will be no iOS-ification of Mac icons. Apple has established proper guidelines on designing app icons specifically for Mac. The only thing that they took from iOS are the rounded-rectangle mask. Which in my opinion actually looks better, since previously they looked good as an icon individually but when on dock it looked kinda messy if you have many app. By placing them in the rounded-rectangle mask with some freedom to go beyond its frame, cause it’s a Mac, gives it a uniform look visually. So technically they’re still going to retain their visual aesthetic, and will also push even more designers to draw more 2.5D looking icons. The only area where app icons are looking different is ‘shadow depth’ some look 3D, 2.5D and some slapped with little shadow, just so they look Big Sur enough.

Yeah, having every single icon using the same shape is what I meant by trending toward iOS design ethics. The distinctive shapes worked as a visual aid in finding the one you’re looking for in a single glance; unlike you I don’t find that to look messy. I have more difficulty quickly locating an icon when looking at an iOS home screen because every developer is forced by Apple to use the same exact shape, there is more scanning involved, more scrutiny—and overall I have noticed there is less variety in design.

Not every good idea can fit into a rounded rectangle, which means a lot of good icon ideas get lost, and there are certain things that just work better when stuck in a shape like that, and other ideas that are a very poor fit. Like, for example, Obsidian’s current icon. I love it! It’s a fantastic icon, but frankly it’s no good for iOS (and now Mac), as the best you can do is just toss it on a matte background. There are billions of ideas like that that are now gone. To me that’s a much, much bigger problem than whether designers use a little drop shadow or pebbling.

That aside, there is potential for distinction between platforms, I agree, but I bet the human tendency toward finding the easiest path causes more homegenisation between platforms in the end. Some might like that, but I find iOS’ aesthetic to be very unsatisfying—and that includes things like rigidity in icon shapes.

Ah well, I’m just grumbling at this point. I’ve left Mac for Linux some time ago, but I do still have a bit of an emotional connection to the platform I suppose, after twenty-five years of using it.

I have the same situation. I haven’t figured it out yet.

Love this, thank you! Obsidian’s logo really bothers me for some reason.