When setting the editor to use RTL , the text is all over Right to left , no matter it’s left to right language or Right to left language , in cases that we have mixed RTL and LTR texts.
For example Arabic or Persian text and English text.
In SimpleNote , which is a Electron-based app like Obsidian, the mixed RTL and LTR are supported and working well, please implement this feature as it’s necessary for RTL users.

Implementing Mixed layout, which supports both RTL and LTR in realtime.
the RTL text will be in Right direction and the LTR text in left.

many electron apps support this, i wonder if the lack of it is related to md or something else

I’ve wrote some workaround that includes mixed directions in one note: Obsidian - How to Set LTR Area Within RTL Note

A Lots of users write their notes in more than one language some of the languages are rtl like Arabic
Unfortunately When I activate the rtl option even my English notes goes from right to left I hope if there is a dynamic solution something like google keep, twitter and a lot of other apps.
It will be really helpful.

I agree, I had the same problem so it will be useful to have dynamic RTL / LTR.

I had the same problem, I just hope for auto RTL / LTR like in MS word. Just put the cursor and start typing in RTL or LTR direction, no black magic, no special coding hacks.

From what I know that electron support mixed directions since this feature had been supported for a long time in browsers which what electron based on (chromium).

I thing the solution that user @lingdocs suggested here will fix the problem. Could it be used?
<p dir='auto'>

In continue of this:
It can be fixed by adding a dir="auto" attribute to all <div class="cm-line">s as you can see in the picture

When typing in obsidian, the text in the editor is either LTR or RTL. There is no in between. And the non-native support of Mixed RTL and LTR in obsidian is a big problem for people who speak Arabic, Hebrew and Persian language.

there are lots of hacks and codes shared around here to partially solve this, but none completely work as intended.

I was researching a way to do an automatic and universal way without me having to put wacky code on every line to make it LTR or RTL.
I solved my problem and achieved the MS Word-like behavior of mixed RTL and LTR that I desired, and wanted to share my finding.

Here my code, it’s simple and very effective. Just type and it’s automatically will be either RTL or LTR depends on the language.

Save as text-bidi.css in snippets folder and activate it from "CSS snippets" in the setting menu. that’s it.

Thanks to realsarm at stackoverflow because his answer made me know about unicode-bidi: plaintext.

Here an image of some Lorem ipsum text from wikipedia to demonstrate the Mixed RTL and LTR text. 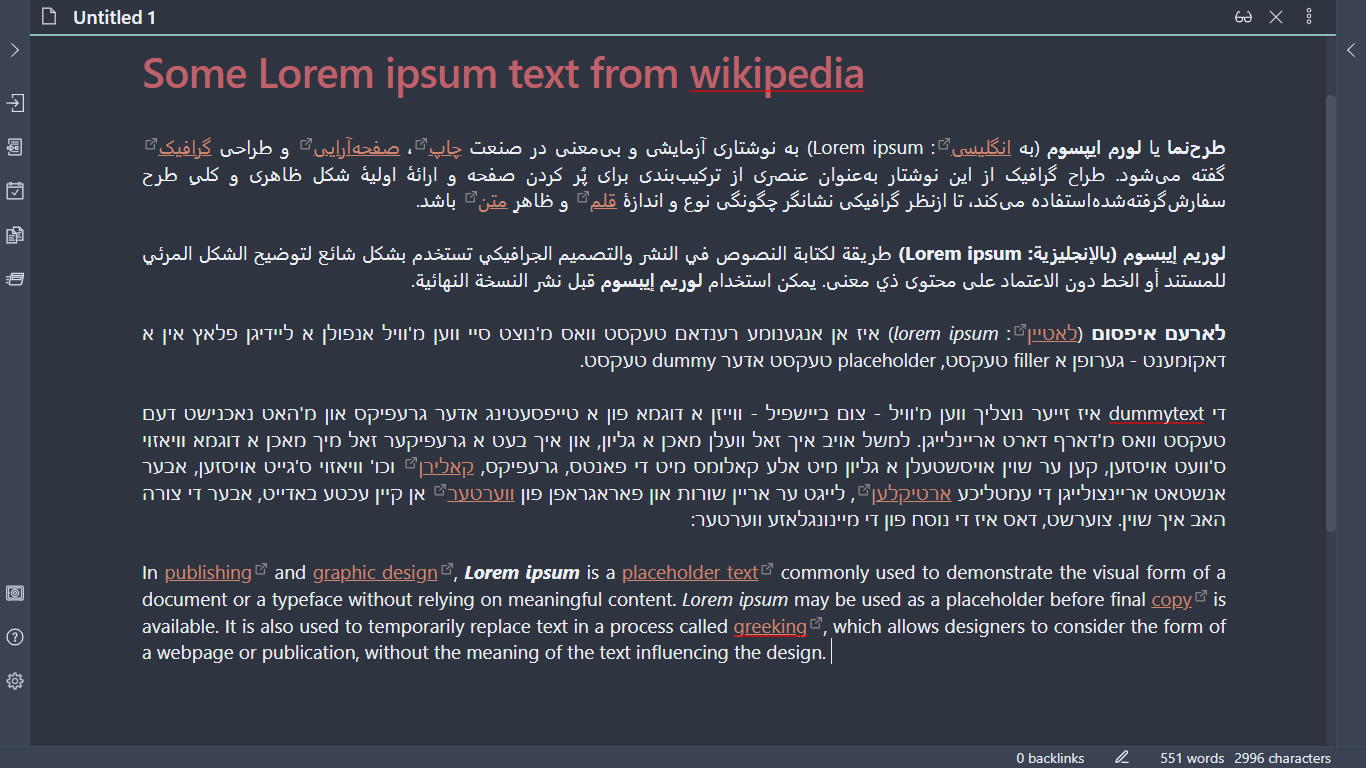 I tried this method. It is very effective and solves 80% of my problems. However, it only works with text and does not affect other blocks like bullet lists, numbered lists, quotes, etc. Also if the sentence starts with a non-rtl character (* or =) it won’t work.

I guess i was too excited and didn’t fully test. will edit the post to reflect that.
I don’t know why it’s failed, is the problem that obsidian always assume LTR by design or it’s that unicode-bid isn’t really suitable for text with special characters.

like numbered list work as intended, but headers, tables, Bullets lists, Checklist, quotes are not. for images it works as long as there RTL character after the image URL. 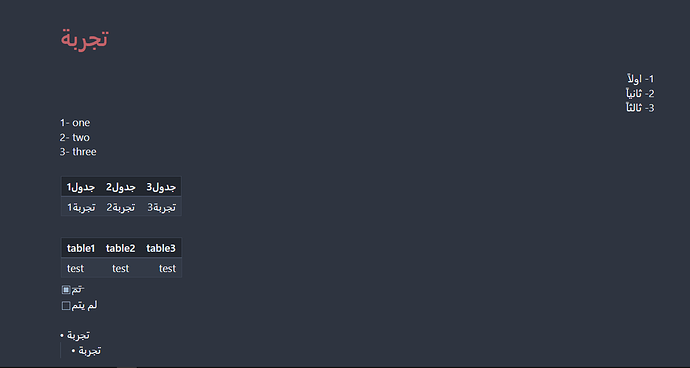 I can’t edit the post, I want to say that it isn’t the magical solution we were looking for and explain where it fail.
Should I delete the post?

You’re using a very general selector to apply the style — perhaps you could try adding some more specific selectors to target the elements that aren’t receiving the style.

I mean after tinkering with obsidian’s CSS, I don’t think a full solution is even possible with CSS, we need javascript to do the heavy lifting here to alter the HTML rendering.

Ah, well. Might be worth having another look when the new default theme is released (if you’re not already using it via Insider builds).

I gonna merge this discussion with the FR

Good news, looking forward to see how it works. I wish I can handle editing part better than most othere. it is not the problem of showing right in preview, it is the issue of editing in mixed language mode is exteremly frustrating.