Thanks for this excellent theme, @kepano. It appears that, when combined with Advanced Appearance, changing the editor font doesn’t work at all in the Obsidian mobile beta for iOS. Are the plugin and theme ready for mobile yet when it comes to custom fonts?

Minimal does not have any special support for the mobile version, yet.

I investigated the issue with the editor font, and published a change that should hopefully fix this issue for you.

I have been waiting for the mobile version to stabilize before I start to work on updating Minimal theme for it.

Hi there - I’ve noticed that when I have a HTML code block all of the HTML tags are displayed as tags - is this a known issue? It doesn’t happen with any other theme

Can you provide sample content that I can test with?

Hi! I hate to jump on this topic only to report bugs, but Minimal Theme has made my use of Obsidian 1000% more enjoyable for almost a year now, and I can’t get myself to use any other theme.

Basically, backlinks don’t work properly with some notes, and when you click on some backlinks it takes you to the top instead of going to the specific place where the other note was referenced. It’s hard to reproduce, since I can’t identify any differences between the notes in which it works and those in which it doesn’t, but this happens in enough notes for me to notice it on a daily basis.

I tested this on Safe Mode, with all plug-ins turned off, but I forgot to disable them for the screenshots. When I found a note in which the bug was present, I disabled Minimal and went back to the default theme, and the bug resolved. Turned Minimal back on, and the bug came back. I didn’t have time to record a more detailed demonstration, but here are a few important things I’ve discovered about this bug:

Hope this exploration saves you some work and helps you pinpoint what could be causing this. Like I said, it is a rather specific bug, so I don’t know if you’ll be able to reproduce it. I don’t know if it is triggered by notes that are too long, or notes that have too many backlinks, but since switching to Default fixes it every time, I’m sure there’s something that can be done about the theme and the plug-ins.

EDIT: Just found and occurrence in which backlinks work with both the Default Theme and Default Theme + Advance Appearence, but not with Minimal. This makes my previous statement about the bug being present in both Minimal and Advanced Appearence invalid.

Thanks for the details. I am trying reproduce this but haven’t been able to yet.

Sorry for the delay. Over the last week I tried everything I could to help pinpoint the issue, but it is so erratic that I just couldn’t.

If I scroll fast enough on a long file with the bug, I get to see that Obsidian is actually highlighting the paragraph with the backlink. It is still doing part of the job, itjust isn’t scrolling.

At one point, the file I used as an example in my screenshots started working properly. I thought the bug could have something to do with re-indexing my vault, or restarting my machine, but then it happened again on a random file. After that, I went back to the files from the screenshot and the bug came back, which would mean that there’s something about those files that I just cannot identify. One of them is 300 words long, and the other has 3000, so it isn’t about the lenght. They don’t have any fancy code or plug-in specific stuff either, it’s just plain markdown.

If nobody is able to reproduce it, let’s just hope this is one of those really particular issues that will resolve on its own.

Minimal Theme 3.0 is now available with deep support for iPhone and iPad! Tons of small details designed make your work smoother and faster across devices. 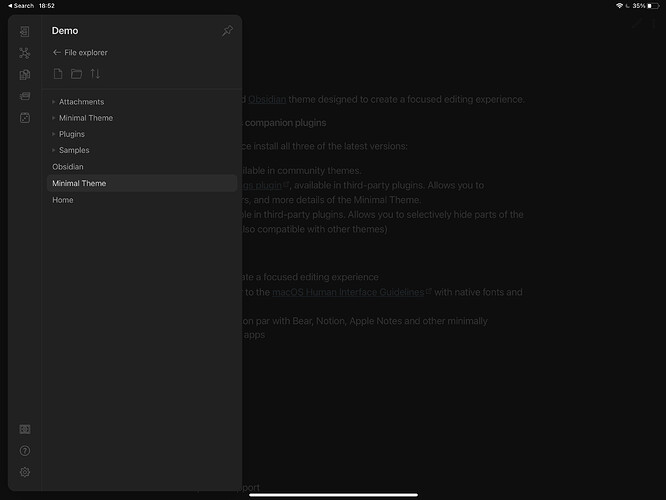 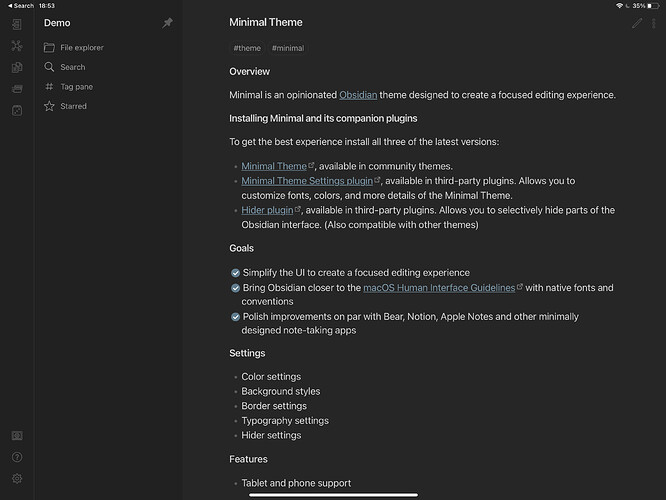 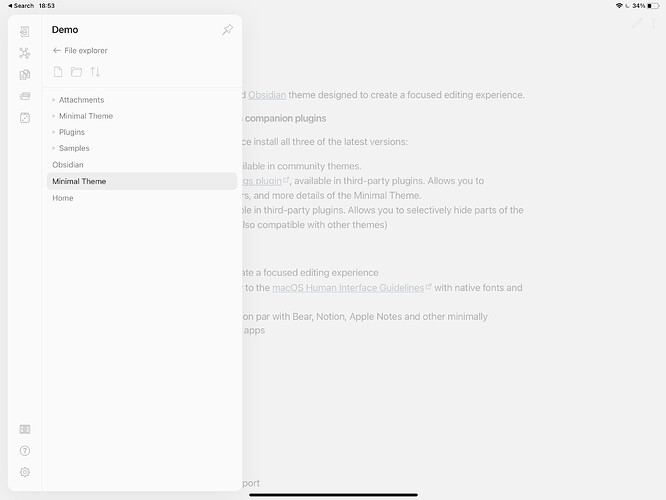 Hi @kepano. Thank you for this update: I’ll try in mobile. But for now, in desktop update, I detected many issues with font sizes: e.g., the text size in editor or preview mode doesn’t follow the size defined in “Minimal Theme Settings” plugin.
About fonts, I suppose that the fonts defined in “Minimal Theme Settings” are not applied to mobile (because fonts are not allowed to install on iOS system). Any possibility to make the plugin (or the theme) not change the default fonts in mobile and apply any change only to desktop appearance?

Thanks, I just found a small bug. The font sizes should work again if you download the latest version. The mobile font sizes are still driven by the Minimal Theme Settings but slightly adjusted to compensate for screen sizes.

Thank you.
I didn’t ‘read’ the code, so I don’t know how the mobile font sizes are adjusted. But I noticed this: some changes in “Minimal Theme Settings” font sizes have different behaviors in mobile (in comparison with desktop).
Two examples:
1 - I use 14 for “Body font size” > no effect in iPad;
2 - I use 11 for “Sidebar font size” > in this case, in desktop, this font size have effect not only in the text in sidebars but also in the results/render of a block code query:

But in mobile this is problematic: the query results are empty.

In this case, it seems like any font size lower than 13 have some incompatibilities in mobile.

EDIT: in iPad, with the font size in 11, sometimes render the results, sometimes not (the same file, the same queries)

Sorry, I’m not following the issue you have with tags. If I understand correctly you’re saying that when you set the sidebar font size to 11 the tag query results are empty on mobile? I am not able to reproduce this issue.

(sorry for my english)
Not specific to tags, but any embedded query. 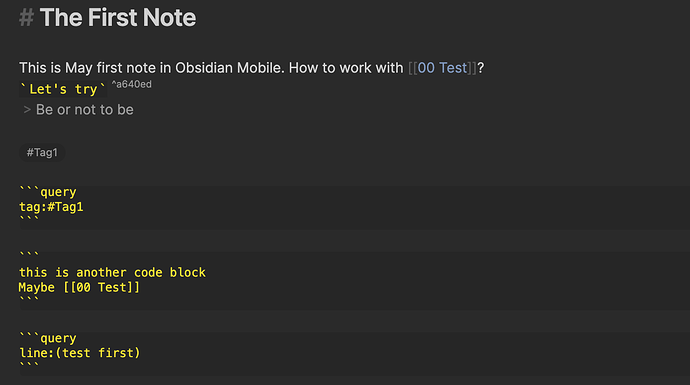 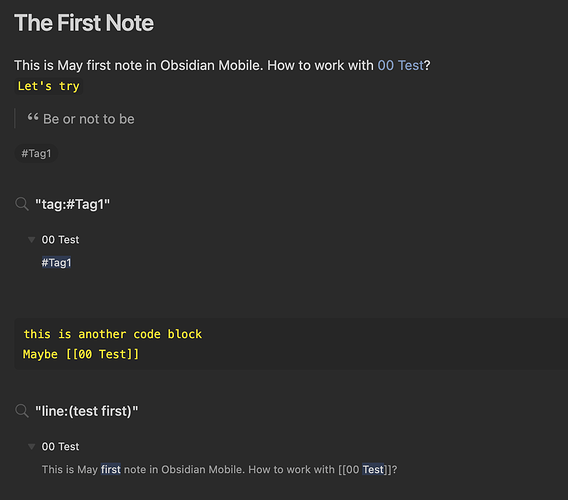 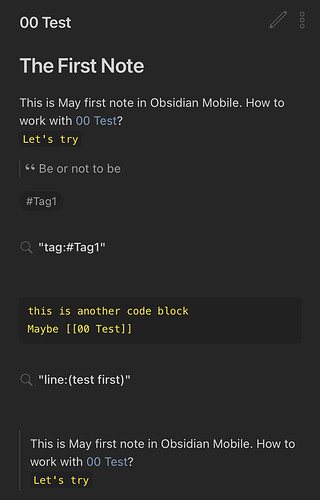 I am not able to reproduce this issue. Have you tested with the default theme? Are you sure this is only happening with Minimal?

I’m using the Minimal theme on macOS and iPadOS, with the latest Obsidian on each.

I’ve noticed that with something in recent updates, the left margin of my editor view is gone (zero pixels), and the file title has moved to the right.

I can get a margin and title alignment back if enable the system setting “Readable Line Length” but that also centers and justifies the text.

I posted screenshots below the message.

Is there is a new change in the Minimal Theme that may have caused this, or a setting I can make that sets or brings back the left margin? 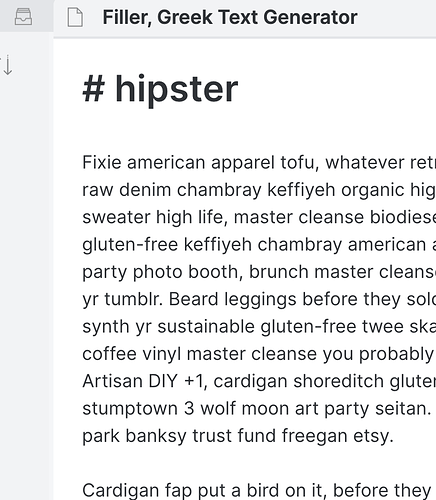 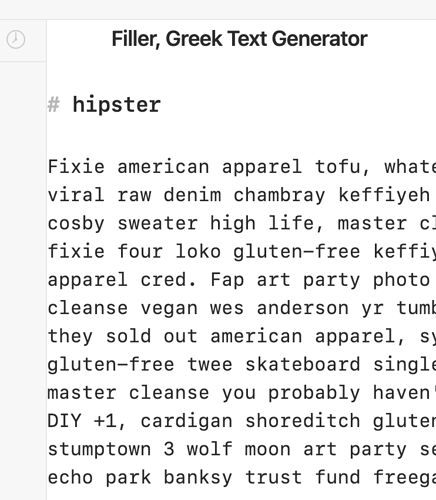 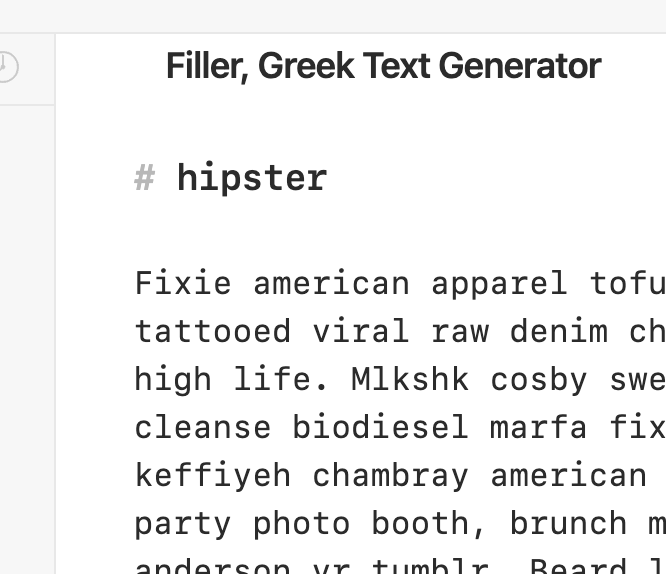 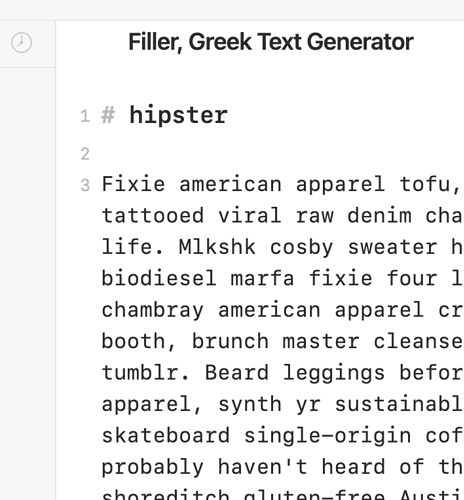 I made some tests with Minimal and default theme. In fact, the behavior is strange and happens in both: sometimes shows the results, sometimes not.
I can’t find a ‘rule’ to the behavior.

I just pushed a small change that should improve things for you. However, the recommended way to customize this is using the “line width” setting in Minimal Theme Settings. From there you can control your optimal line width (also means you need to turn on “Readable line width”).

Hi – the change does improve things. Thank you! I have been using the Minimal Theme plugin to set line width (or not). Where the “Readable line width” can be a problem is on any page that has a drawing, e.g., with Mermaid. With “Readable line width” on, it smushes all the drawings to be fixed within the line width constraint, which messes up the drawing. If you leave “Readable line width” disabled, the drawings render well, and you can scroll to see their full width. Ideally I’d like to be able to leave the Readable setting off and the Minimal Theme always provides at least a little left margin for readability; locking content to the left, and leaving it open on the right. It currently is looking great for me with your most recent update. Thanks again.