MD files appearing in file explorer but not in Obsidian

I was working in Obsidian today when all of a sudden some of my notes disappeared. I think it happened when I created a new folder called ‘Raw Data,’ but I can’t be sure. The lost notes were created a few days ago, whereas the notes and folders that I created today remained. As you can see below, though, my File Explorer shows the notes from a few days ago but NOT the notes or folders from today. Take a look: 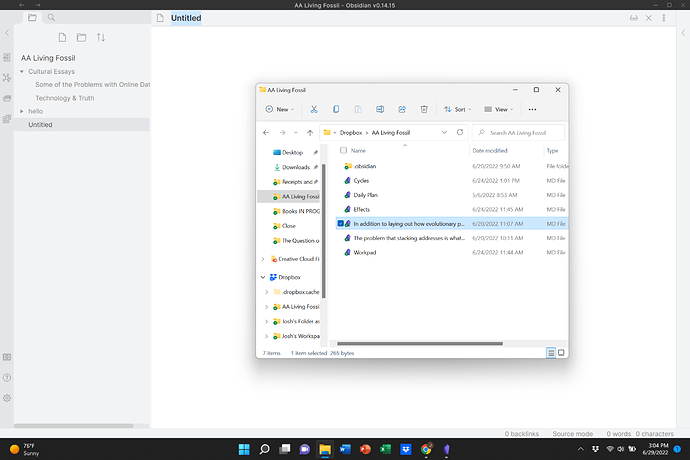 Since I can’t find anything on either of these issues, I’d love the community’s help. These kinds of problems are incredibly concerning for me, as basically the worst thing a platform can do is remove some of my content. I am using Windows 11 btw.

But when I copied markdown files from that other vault into the problem vault, those notes didn’t appear.

Lastly, Dropbox should have some version control built-in to recover lost files. But that shouldn’t stop you from keeping backups and/or version control snapshots of your own too.

As for your final point – I did go in and verify that Obsidian created snapshots of these not-appearing files, so I haven’t lost anything exactly. It’s just disconcerting that they would disappear from view…

You must download and install the latest version from the website. There was a major update somewhere around 0.14 where it was necessary to reinstall, that the auto-updater could not do on its own. This is probably the main source of your troubles.

But it still sounds like you have some sort of syncing or race-condition trouble.

Look inside your .obsidian folder. If some of the folders got merged poorly from Dropbox, you’ll sometimes see a “Filename (conflicted copy 2020-06-29)” or something similar. If your settings files are conflicted, you can run into trouble. Take a look for any weird files like that, or with numbers on the end, like they were duplicated.

I didn’t mean the length. I said “punctuation or other illegal characters in your file names”.

b) Dropbox is somehow interfering.

You are likely using a feature of dropbox where the files are not acctually on your disk but it only looks like they are and they are download on fly.

Ok, I’ll try that since nothing else has worked. What’s the best way to download it and transfer all my files to the new version?

Nvm, just downloaded it and apparently it replaces the old version. Also, I think I figured out what happened. Somehow I had two vaults with the same name in different locations. I’m not sure how this happened, whether user error or bug, but in going into the second, identically-named vault on the second day, that is how I was able to only see those files and not the ones from the previous day.

Anyway, thanks for all your help!